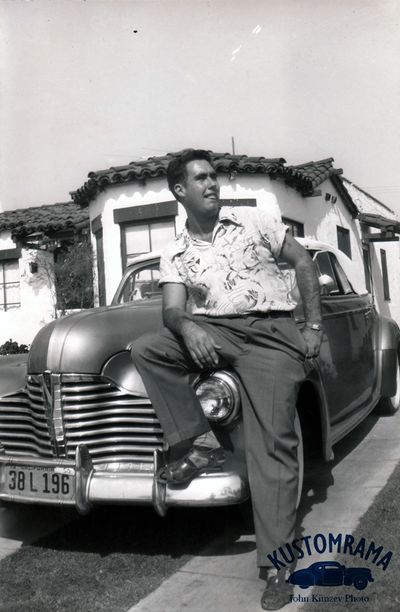 A photo of Lou with his 1941 Buick convertible taken in 1950, just after he had graduated from college and got his job at Road & Track. Lou's Buick was mildly restyled, featuring a padded top and a shaved hood. Photo courtesy of John Kimzey. 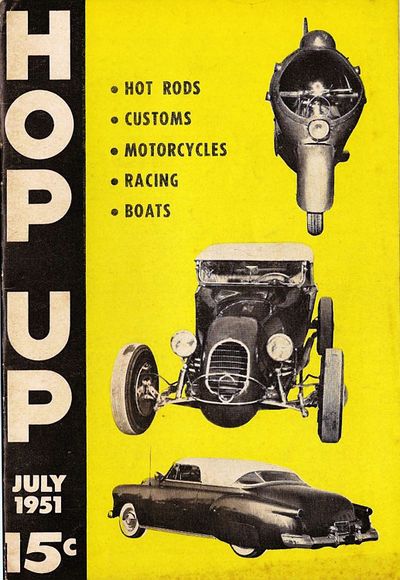 In July of 1951 a small print of Hop Up magazine hit newsstands of California. Measuring 5.5 x 8.0 inches, the July issue of Hop Up was a test-run to see if such an awkward sized magazine would sell. It did, and the cover date was changed to August, before alterations were made inside and a full-tilt printing was ordered. Hop Up magazine was born in the offices of Road & Track magazine with Lou as the Art Director. 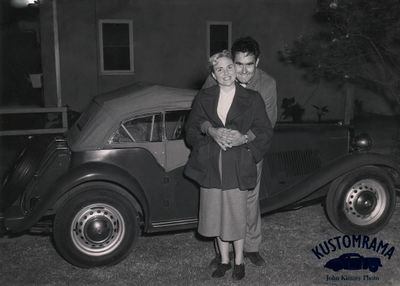 Lou and Irene with one of their MGs. Photo courtesy of John Kimzey. 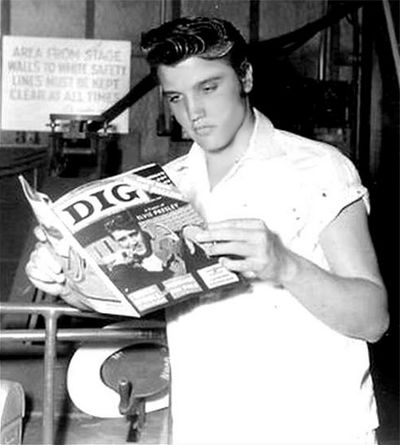 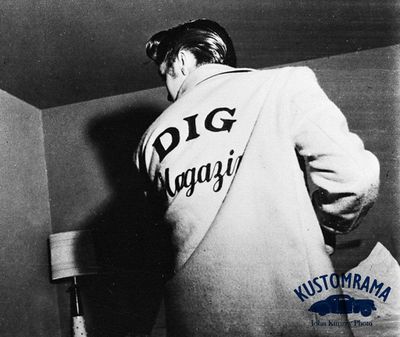 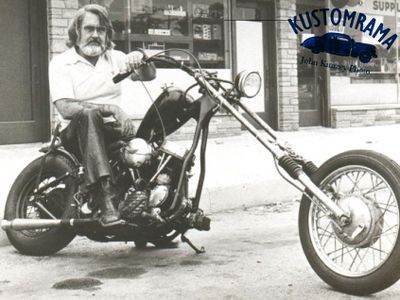 A photo of Lou on his 1947 Harley-Davidson Panhead in the early 1970s. Photo courtesy of John Kimzey. 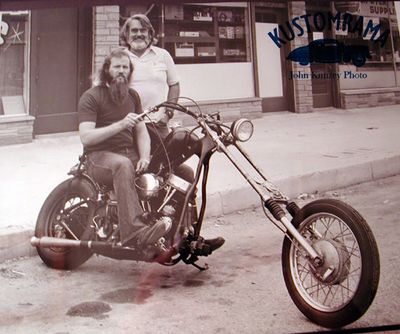 A photo of Lou with Keith Ball, an editor at Easyriders Magazine. Photo courtesy of John Kimzey.

Louis Kimzey (1928 - 1997) was the first art director for Hop Up magazine. Later on he went on to become the founder and publisher of several magazines such as DIG, Modern Times and Eaysriders.[1]

Lou Kimzey was born in South Gate, California in 1928. In 1950, Lou graduated from Woodbury College in Burbank, California, with a degree in Art and Design, specifically related to the business world of publishing. He got his first job in 1950, as an Art Director for Road & Track magazine in Glendale, California. At the time, he drove a customized 1941 Buick convertible. In 2014 Lou's son John told Kustomrama that his dad didn't have any hot rods himself, but he always had the nicest car on the block. "In the early 1950s, my father and mother bought twin MGs, his green and hers red. They both worked at Road & Track at the time. Irene was the circulation manager." After Lou married Irene, he moved from South Gate to Glendale. In Glendale they settled down around the corner from Enthusiasts Publications.[1]

In July of 1951 a small print of Hop Up magazine hit newsstands of California. Measuring 5.5 x 8.0 inches, the July issue of Hop Up was a test-run to see if such an awkward sized magazine would sell. It did, and the cover date was changed to August, before alterations were made inside and a full-tilt printing was ordered. Hop Up magazine was born in the offices of Road & Track magazine. At age 23, Lou was the Art Director for the revolutionary magazine, in addition to also working with Motor Life and Road & Track. After a year, the magazine was maturing, and things went along well enough until financial problems loomed in 1952. Bill Quinn, Road & Track ad manager and minor shareholder feared the worst, so he traded his shares in the company for the rights to Hop Up. Bill moved the magazine and the newly born Quinn Publications to the building next door, taking with him Lou, photographer Ralph Poole, and Dean Batchelor. The new office was a small bungalow with a living room, two bedrooms, one bath, and a kitchen that was converted in to a darkroom. Hop Up's first Quinn issue hit the newsstand July 1952.[2] Between 1952 and 1956 Lou was Art Director, Production Manager, Managing Editor, and contributing writer for other Quinn Publications magazines such as Rod & Custom, Motor Life and various paperback books.[1]

In 1958, due to the teen-sensation of DIG magazine, Lou was asked to co-produce the movies Hot Rod Gang and High School Hellcats with Charles Rogers and Lou Rusoff. Lou also had a hand in co-writing Hot Rod Gang with Rusoff. Both movies were B movies, released by American International Pictures, who was known for releasing independently produced, low-budget films packaged as double features. AIP released both of Lou’s films as a double feature. The working title was Hot Rod Rock but was released in the US as Hot Rod Gang and in the UK as Fury Unleashed.[1]

In 1963 Lou had a dark green Austin Healey. He purchased a black 1965 Buick Riviera when the new model came out that year. He loved cars and Harley Davidsons, and he had several Harley's over the years, his favorite being a 1947 Harley Davidson Panhead.[1]

Lou was a biker, and in the early 1970s he formed Paisano Publication a publishing house that gave birth to the gritty biker magazine Easyriders, the first lifestyle biker magazine on the market. Lou's daughter came up with the name for the magazine after watching the movie Easy Rider. Easyriders went on to become a world sensation, the largest selling motorcycle magazine in the world with a circulation of over 550,000 copies. Paisano Publication did also create magazines such as Iron Horse Magazine, In the Wind Magazine, Motorcycle Women, Tattoos Magazine, Yesterdaze, and Earlyriders. According to Lou's son John, nothing went into any product unless it was approved by his father. He read all copy, approved all photos, artwork, cartoons and layout design.[1]

In addition to the motorcycle magazine, Lou also created the motorcyclists right organization A.B.A.T.E., and in August of 2009 he was inducted into the Sturgis Hall of Fame.[1]

Please get in touch with us at mail@kustomrama.com if you have additional information or photos to share about Lou Kimzey.