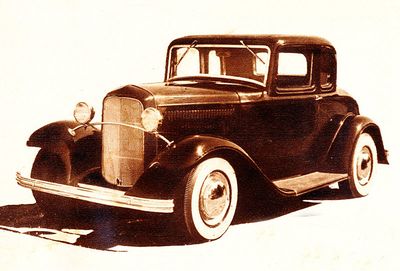 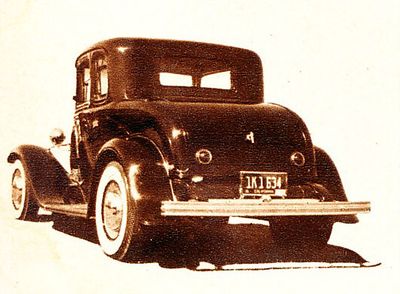 1932 Ford 5-Window Coupe restyled by Huffman's Body Shop in Modesto for Les Johnson of Modesto, California. Les' Coupe could be considered to be one of the cleanest Deuce Coupes at that time. The car was torn completely apart and restored throughout. The body was restyled by installing a set of Pontiac taillights, other than this, the rear was modified with chromed bumper brackets, and a chromed rear cross member. A chromed bead was placed between the body and fenders. The interior was upholstered in black and white leatherette. The headliner was entirely black, with an occasional strip of white heading crossing it at intervals. The dashboard received the majority of the custom work. The original instrument panel has been removed and replaced with a single large panel containing a full compliment of Stewart-Warner instruments, which included, water temperature, ammeter, tachometer, fuel speedometer and oil temperature. The grille shell was shaved, and the headlights along with the headlight brackets and bumper brackets were chrome plated. A dropped axle was installed, along with smaller front tires giving it a forward rake. The engine and running gear was restored to perfect condition.[1]

Please get in touch with us at mail@kustomrama.com if you have additional information or photos to share about Les Johnson's 1932 Ford.