This photo of the Volpe twins car appeared in Motor Trend May 1953. The story was entitled "Detroit Embraces Customizing". Photo courtesy of Motor Trend Magazine. 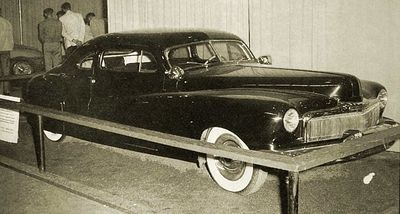 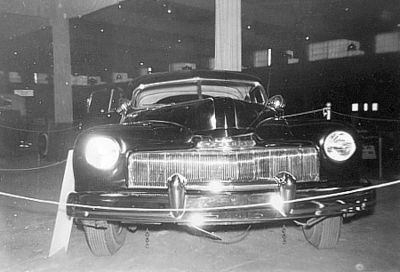 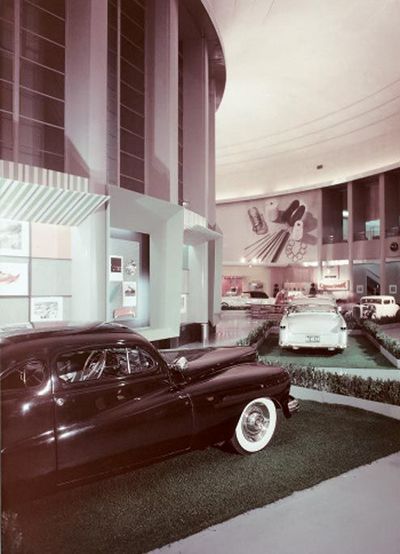 The Volpe Brothers' Coupe at the 1956 Rotunda Custom Car Show.[1] 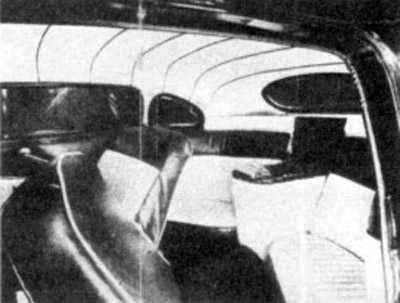 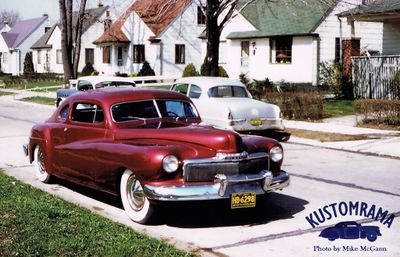 The Merc as it appeared after Mike McGann had painted it Mandarin Maroon. Photo courtesy of Mike McGann, provided by Brothers Custom Automotive. 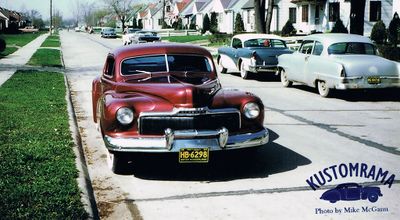 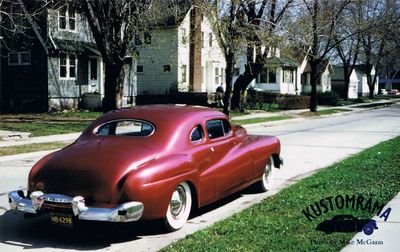 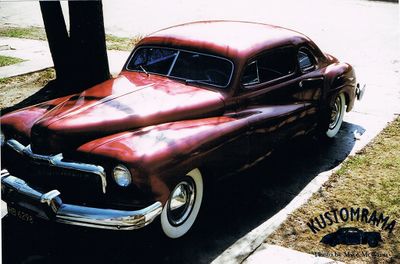 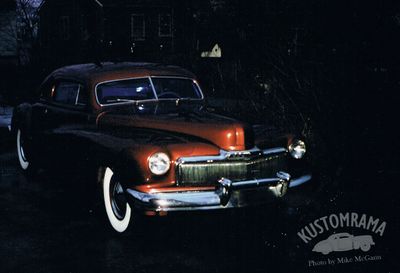 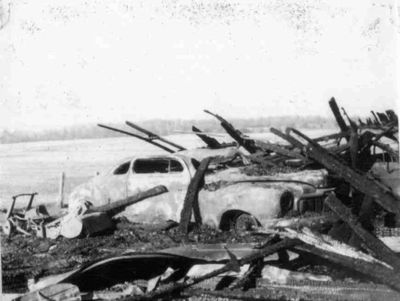 1948 Mercury coupe originally owned by the twin brothers Leo and Adele Volpe of Oak Park, Michigan. In 1952 the brothers brought their Merc to Clarkaiser Custom Shop in Detroit for a restyling.[2] At Clarkaiser, the car was radically restyled, and the body was chopped, sectioned and channeled. It was further fit with full fadeaway fenders before they was shaved it for ornamentation on the hood and deck lid. It was shaved for most of its trim, and the ordinary door handles were replaced by push buttons. The headlights were frenched, and the the taillights were repositioned to the bumper guards for a cleaner look. The car was lowered, and fit with Sombrero hubcaps and dual spotlights. Inside, the stock upholstery was torn out and replaced by an exotic black and white rolled and pleated interior featuring a curved rear cocktail lounge. Once completed, the Volpe Brothers Coupe won first place at the 1952 Cinncinati Custom Car Show.[2] The car appeared in Motor Trend May 1953. In the article Leo and Adele were misspelled "Les and Adle Volpe", and the car has since then been referred to as "Les and Adle Volpe's 1948 Mercury".

Mike McGann of Royal Oak, Michigan bought the Mercury in 1954 or 1955. "I worked all summer for college tuition, and I spent most of the money on the car. When I bought the car it had been sitting on a car lot in Detroit under consigment. The spotlights had been stolen, as well as the gear shift lever. The front vent window was missing, probably because the crooks thought the car was locked. The door did not pop open when the button was pressed. When I bought the car, the Volpe brothers had a dance studio on 6 mile road in Detroit, and I went there to make the deal." When Mike got the car, the paint was cracked everywhere and beyond repair, so he sanded it down to bare metal before he had it painted Mandarin Maroon. "The Merc had fender skirts and I had those on until I had the car painted. One of the skirts was damaged when I bought the car and I never had it repaired, so I left them off." Mike sold the coupe late 1958 or early 1959.[3]

Tom Liechty of Ann Arbor, Michigan bought the car, and restored it back to its 1950s glory. During the restoration the Merc was fit with a Ford overhead engine, a tilt steering column, bucket seats, and a stereo sound system.

Previous owner Mike McGann don't know who gave the coupe the Unicorn name, or when it received it. "Back then all cars were called by the owners name until Al Reason put a name on his chopped 1950 Ford." Al's Ford was named the Utopian.[3]

Please get in touch with us at mail@kustomrama.com if you have additional information or photos to share about Leo and Adele Volpe's 1948 Mercury.