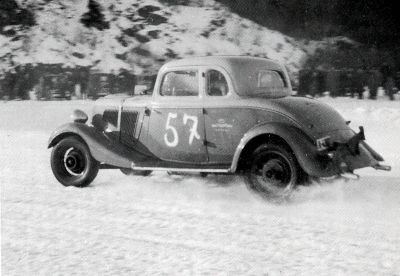 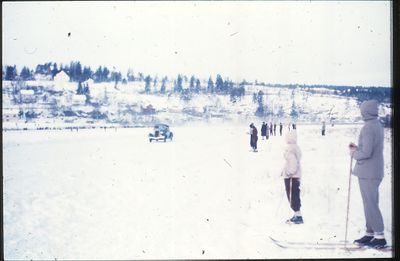 Basse racing his Ford at Østensjøvannet in 1954. The car was supposedly known as "The Blue Grandma Duck Car." Photo by Arne Thorleif Belstad, courtesy of Lokalhistoriske bildebaser i Oslo.

1933 Ford 5-Window Coupe owned and raced by Norwegian speedway champion Leif "Basse" Hveem of Oslo, Norway. Lasse's coupe was light blue and grey, and it ran a leather strap over the hood.[1]

Heads and Camshaft from Flua

In 1948 Einar Nyhus built a Nordic Special Racer that became known as "Flua." After racing the car all over Scandinavia, he sold the car to a used car dealer at Rodeløkka in Oslo. He raced it for a while before he sold it off. After that, the car was stored outside in the cold, causing the engine block to crack. Basse bought the damaged engine and used the heads and camshaft from it on his coupe.[2]

Traded for a Cooper-Climax Formula 1 Car

Basse traded the coupe for a full-blooded Cooper-Climax formula 1 car.[1]

Basse passed away on July 23, 1964. Jan Erik Kvernes of Oslo bought the car from Basse's widow in the mid 1960s. Jan Erik, also known as "Smørbukk," was a member of Nor-Way Custom, and in 2017 he told Kustomrama that it was still blue and grey when he got it; "It sat in a yard in Brattlikollen on Lamberseter when I bought it." In 2012 Gunnar Berg-Kristoffersen told Kustomrama that he remembered that the body of Smørbukk's coupe was hanging in the roof above the frame, while Jan Erik was working on the car in the Nor-Way Custom club garage on Alnabru; "It featured split-wishbone, a chromed front axle with chrome plated drums and 283 Chevrolet V-8 engine."[3]

Jan Erik didn't complete the build, and later on in the 1960s he sold it to his buddy Tore "Katten" Olsen, another young Oslo hot rodder.

In 2016 Morten Thoresen told Sondre Kvipt of Kustomrama that he remembered the car from the time he was an apprentice at Oras in Oslo in 1972. "A plumber had the car back then. He told me it was "stålblå," Morten recalled.[4]

Please get in touch with us at mail@kustomrama.com if you have additional information or photos to share about Leif "Basse" Hveem's 1933 Ford.