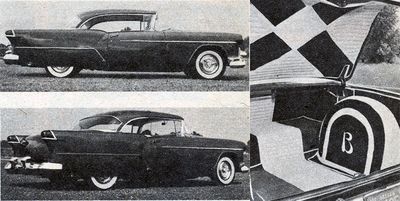 Twelve months went in to turning LeRoy Brune's 1954 Oldsmobile Hardtop into classic kustom. Dee Wescott of Wescott's Auto Restyling in Portland, Oregon did all the Bodywork, while LeRoy concentrated on the engine compartment and trunk upholstery.[1]

Up front, the headlights were frenched and modified with 1954 Mercury headlight rims. The hood was nosed and peaked. LeRoy kept the original grille, but modified it with special frosted plastic lenses for the grille bar park lights. LeRoy also kept the original rear side trim, but he reversed them for a customized look. The rear fenders were also modified with 1954 Packard taillights. As exhaust tips, portholes from a 1954 Buick were used in the lower edge of the fenders.[1]

In order to get the right stance, the car was lowered 3 inches all around. Lowering blocks were used in the rear, while the A-arm coils in the rear were chopped.[1]

The interior of the car was done in light blue and antique white. The carpet was done in dark grey. The stitching was done by Dubruille Top Company.[1]

Please get in touch with us at mail@kustomrama.com if you have additional information or photos to share about LeRoy Brune's 1954 Oldsmobile.