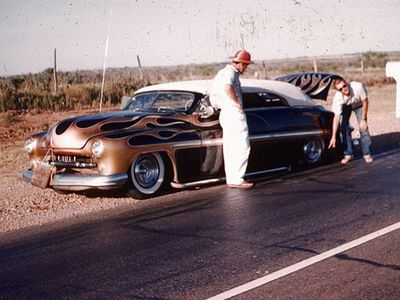 Changing a flat tire. Photo from the Bill Junge Collection 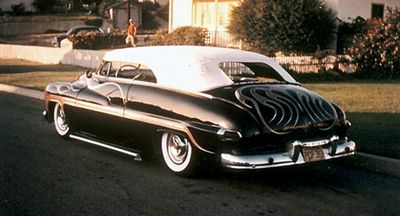 Photo from the Bill Junge Collection 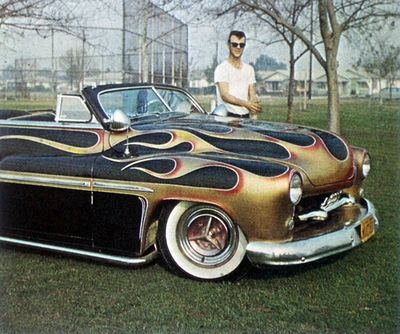 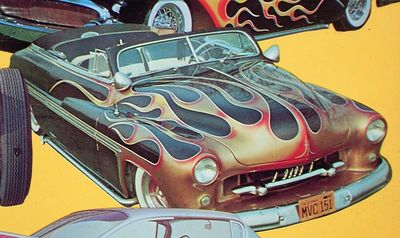 1950 Mercury Convertible owned by Larry Lorenzo of North Long Beach. The windshield was chopped and the car was fit with a white padded top. Up front the hood was shaved, peaked and had its front corners rounded. The front fenders, gravel shield and grille opening were welded together and molded. A custom made floating grille-bar was fit in the grille opening. The headlights were frenched and slightly recessed. The rear deck was filled, and the door handles were shaved. The dual exhaust tips were routed trough the rear bumper. A pair of 1949 Buick taillights were mounted horizontally in the rear quarter panel. All the pan creases were welded and molded solid. Larry wanted his Merc low, a task which he completed. Dual spotlights, full length lakes pipes and Oldsmobile Fiesta hubcaps wrapped up the style. Once the bodywork was completed the freshly restyled car received a flame job, by Dean Jeffries. The flames were gold and highlighted with red and outlined with white stripes.[1]

Please get in touch with us at mail@kustomrama.com if you have additional information or photos to share about Larry Lorenzo's 1950 Mercury.