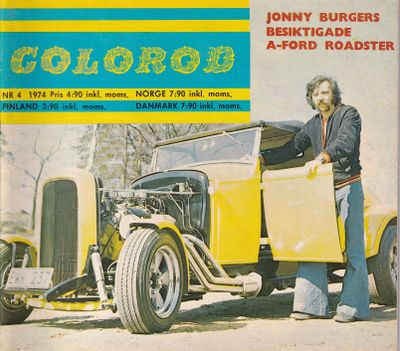 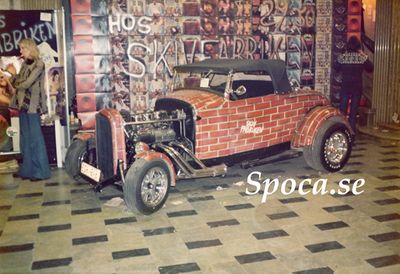 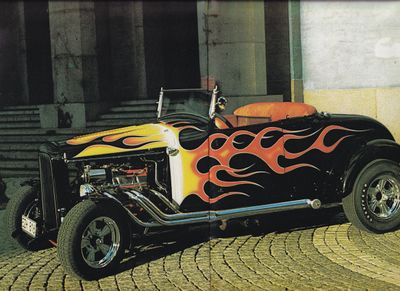 As early as 1962, Jonny Burger from Stockholm grew plans for a Hot Rod. He went to junkyards in Denmark and found a complete -31 Ford Roadster body together with a frame from a -32 Ford sedan. For everything he paid 250 Danish cronas.


After a couple of years the built started. Instead of a flathead a 283" Chevy with M/T valve covers and 3 2-port carbs was installed. The transmission is from Ford Comet (4-gear). ear end is Chevy -58 with 4.11:1. The solid front axle is lowered 2". Brakes from -47 Ford and wheels 14" Rader. The car passed inspection in 1968 and has been used frequently in trips to southern Europe. It proves a good quality work from Jonny.

In 1974, the car was sold to Richard Berlin. Richard immediately let Frittes billack paint the car in a brickstone pattern to promote his record store Skivfabriken. The car was shown at Hot Rod Show 1975.


After that, with help from Ronnie Haglund the car was facelifted with a handmade Pinewood dashboard with S/W gauges, new seat in with leather upholstery by Sadelbagaren and a louvered hood. The brickstone design was not so popular among other hotrodders, so Frittes billack re-painted the car in black and flames by Jarmo Pulkkinen at Skurk & Flytlack. The 3 carb manifold was exchanged with an Edelbrock and 4-port Holley carb. Transmission changed to a Muncie M20.


It is unclear what happened to the car. Probably it was exported to USA.


Jonny Burger tragically died 1997 in an accident while walking home from Lustikulla restaurant in Liljeholmen.

Please get in touch with us at mail@kustomrama.com if you have additional information or photos to share about Jonny Burger's 1931 Ford Roadster.