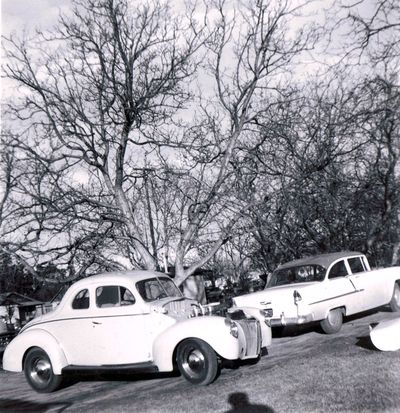 Jon's coupe with as it appeared in late 1954. The new 1955 Chevrolet in the background belonged to Jon's father. Photo from the Jon Enberg collection, provided by Steve Corgiat. 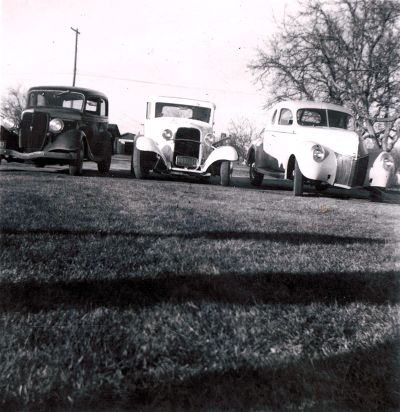 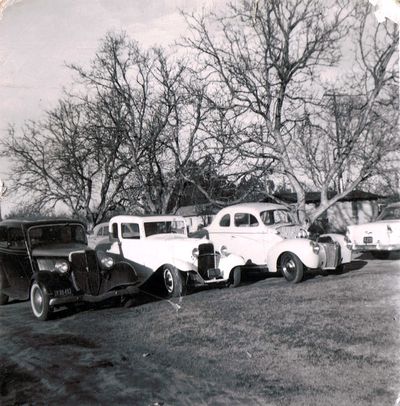 Photo from the Jon Enberg collection, provided by Steve Corgiat.

1940 Ford Coupe owned by Modesto Century Toppers member Jon Enberg of Modesto, California. Jon's coupe was yellow with a yellow and white interior, chromed wheels and a louvered hood. It was powered by a flathead ford V8 that had been bored 3 3/8" and stroked 4 1/8". After boring and stroking the engine, it yielded 296 cubic inches instead of the stock 239. The block in John's coupe was one of Gene Winfield's race motors, and it was further hopped up by installing an intake manifold fit with three Stromberg 97's carburetors and Harman & Collins ignition.[1]

One time the clutch in Jon's coupe exploded and broke the bell housing. Jon had the bell housing brazed back on to the salvaged block, and Gene brought him a custom crank and pistons back from his honeymoon trip in Los Angeles.[1]

Please get in touch with us at mail@kustomrama.com if you have additional information or photos to share about Jon Enberg's 1940 Ford.