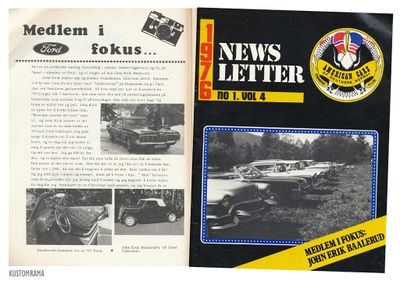 Two photos of John Erik's Ford were published in American Cars of Southern Norway Newsletter No. 1 - 1976, in a story about John Erik and his cars. 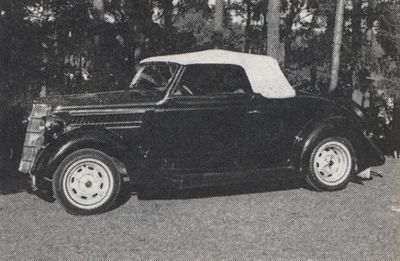 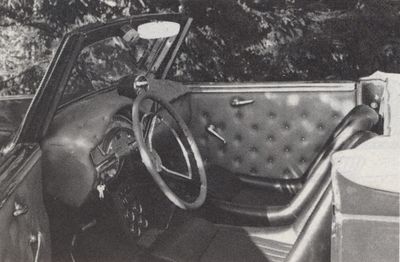 1935 Ford cabriolet owned and built by John Erik Baalerud of Oslo, Norway. John Erik, who lived at Opsal, bought the Ford from his neighbour in 1963, and he had to pay 600 kr for the project. In 1976 John Erik told Terje Sæthre, from American Cars of Southern Norway, that his dad wasn't happy when he learned about the car; "He thought it was a wreck! But he eventually let me keep it. I worked on the car for 3 years, and I spent a lot of time welding on it in the snow. I almost froze to death!" Completed in 1966, Jon Erik's cabriolet was fit it with a 1957 Ford dashboard, sport seats and a custom upholstery. After it was completed, John Erik got bypassed by a Chevrolet with an inline 6 engine. "After that I realized that I had to install an overhead valve engine in the car, so I bought a 292 Ford engine that I installed in it. As far as I know, this was the first pre-war Ford with an overhead valve V 8 in Norway," John Erik told Terje. In 1968 John Erik became a member of Nor-Way Custom, an Oslo based hot rod and custom car club. John Erik's next car was a 1965 Ford Mustang fastback.[1]

Lilleba Volle and Kai Krydsby owned the Ford together in the 1970s.[2]

In 2017 Tore Ringvold told Espen Volle that he believed the car was still around, located in Vestfold.[2]

Please get in touch with us at mail@kustomrama.com if you have additional information or photos to share about John Erik Baalerud's 1935 Ford.