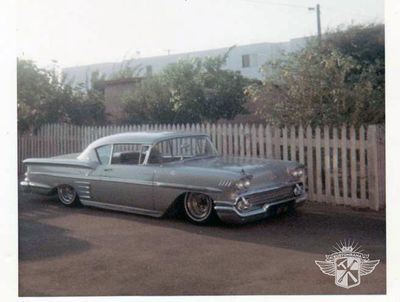 The Impala as it looked while Dennis McKee owned it. Dennis traded the car for a 1963 Chevrolet Impala. Photo courtesy of Dennis McKee. 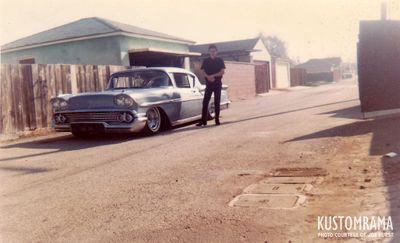 A photo of Dennis Hughes with the Impala taken in January of 1967. Photo courtesy of Joe Hurst. 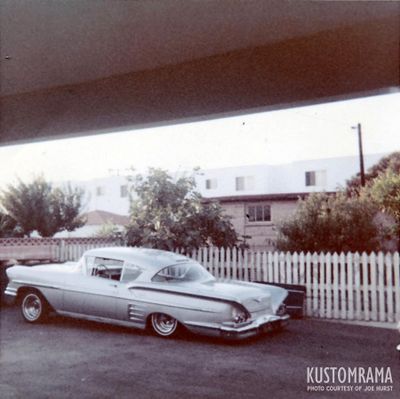 Another photo of the Impala taken in January of 1967. Accordin to Joe Hurst, Red's lifts worked perfect and quiet. Photo courtesy of Joe Hurst.

After buying the car, Joe had Hazelton Body Shop paint it Silver. He then had "Red" of Hawthorne install lifts on it. At that time everyone were going to "Bear" in Downey for lifts. "Red" was a welder at the time and thought he would get int on some of the lift business. Joe's Impala had one pump and a switch beside the drivers seat. You pushed the switch forward to raise or lower the front and backward to operate the rear. It had one battery in the trunk that ran without charging system. In 2016 Joe told Kustomrama that Red had a shop at Imperial and Aviation when he installed the hydraulics on the Impala; "Red's lifts worked perfect and quiet!" The stock interior was blue, and Joe kept it stock while he owned it. Power came from a 348 engine.[1]

Joe traded the Impala to Dennis Hughes for a 1963 Ford Thunderbird, and Dennis traded it to Dennis McKee for a 1963 Chevrolet Impala in 1967. This was Dennis' second 1958 Chevrolet Impala, and his favorite car of all the cars he has owned over the years. After he got the car, Dennis installed a set of Astro Supreme's on it. Dennis remembers that while he owned the car, he would take it to the gas station at the corner of Artesia Blvd and Van Ness a block away from his house to charge it. He took it over on Friday afternoon, and for a dollar they would put it on the battery charger and give it a full charge that would last through the weekend if he didn't go crazy raising and lowering it too much. He had a wooden box with insulation that covered it all so you didn't hear the noise it made. On the box he put the yellow plastic letters off a telephone pole that said "HIGH VOLTAGE". Dennis sold the car to a local guy in 1968. He was about 17 years old, and Dennis got like a thousand dollars for it half down and the rest in payments. As he didn't pay the rest, Dennis repossessed the wheels and tires and sold them for what he owed him.[1]

Please get in touch with us at mail@kustomrama.com if you have additional information or photos to share about Joe Hurst's 1958 Chevrolet.