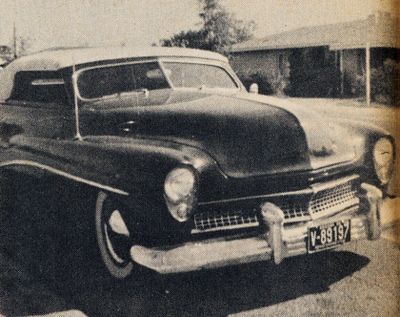 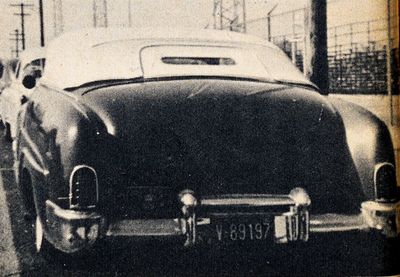 1951 Mercury convertible owned by Jim Musil of Phoenix, Arizona. Up front, Jim's Mercury was restyled featuring frenched 1953 Buick headlights and a 1955 Ford grille. The hood was shaved for ornamentation and leaded before the corners were rounded. The windshield frame was chopped 4 inches, and the car was fit with a padded top from Carson Top Shop. The deck lid and doors were shaved, and a pair of 1951 Lincoln taillights were installed in the rear. The stock side-trim was replaced by chrome stripping from a newer 1955 Buick. Full moon hubcaps wrapped up the style. After lowering the car, Jim's Merc sat 9 1/2 inches from the ground at all points.[1]

The interior was done in black and red rolled and pleated Naugahyde. The padded top was upholstered on the inside to match the upholstery. The top was removed for dragging, and a tarpaulin was fitted over the back seats. Powered by a 1953 Mercury block that had been bored and stroked, ported, polished and relieved, Jim's Merc reached the speed of 86 mph in the quarter at the strip. The engine was also fit with Sharp hi-comp heads, a full Isky race cam and an Offenhauser 3-pot manifold with Stromberg 97's.[1]

Please get in touch with us at mail@kustomrama.com if you have additional information or photos to share about Jim Musil's 1951 Mercury.