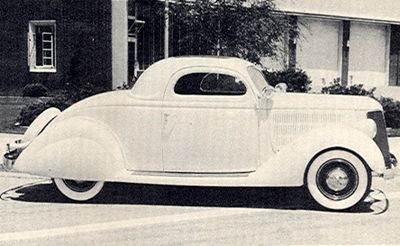 Photo from the 1953 Motorama Official Program. 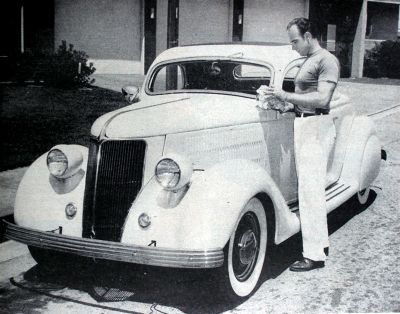 After getting his 1936 Ford was hit by a trolley, Jim McKinley of Inglewood, California decided to turn the Three-Window Coupe into a kustom. Jim was a member of Coupes Auto Club of Inglewood. Three fellow Coupes member owned 36 Three-Window Coupes, and that led Jim to buying one. Jim bought his coupe in 1948. The car cost $400.[1]

Jim started his build by chopping the top two and a half inches. After that he molded the running boards to the front and rear fenders. He also removed the rubber from the running boards. By combining lengths of MG running boards material together, Jim created new unique rubber strips on the running boards. Jim also removed the vertical fender molding trim running from the front headlights down to the lower edge of the fenders. The gaps were then filled and smoothed over. To create a wider appearance and improved lightning, Jim moved the headlights two inches outward, two inches back, and down one inch. Up front, two 1947 Ford parking lights were installed in the opening that originally housed the twin horn grilles.[1] 161 louvers were punched in sides and top of the hood.[2]

In the rear, Jim shaved the deck lid, and installed a Ford convertible top mechanism so that he could operate the deck lid electrically. The spare tire was also relocated by lowering the arm several inches. The angle of the spare's mounting bracket was also changed to a more sloping attitude to allow the assembly to follow the curving lines of the rear deck more closely.[1]

Inside, the car featured a pleated two-tone maroon and tan interior in genuine leather. The floor coverings were also done in maroon.[1]

Please get in touch with us at mail@kustomrama.com if you have additional information or photos to share about Jim McKinley's 1936 Ford.