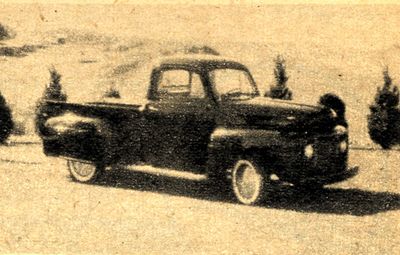 1949 Ford F-1 owned and restyled by Jim Green of Wormleysburg, Pennsylvania. Jim sent a request to Car Craft magazine if they could publish some pictures of his pickup in their magazine. Jim started by removing the stock grille and install a new custom made by Jim himself from expanded metal. He then had a body shop to remove all the chrome on the hood and fill the holes, the body shop also installed a rear gravel pan with the states plate in the middle and with glasspacks on both sides. After this, Jim went along and purchased a set of Chevrolet teardrop fender skirts. He also installed a set of 1950 Pontiac taillights at the bottom of the fenders to go along with the fender skirts. The body was covered with three layers of hand rubbed lacquer, Jim bought a set of spun aluminum discs which he gold dyed. The interior was all done in white with a touch of black pinstriping. The seat covers were black and white in a diamond pattern. The engine was kept stock except for a set of milled heads and dual exhaust. After Jim's truck appeared in Car Craft March 1959, he had planned to have the engine bored out and install a set of Stromberg carburetors installed.[1]

Please get in touch with us at mail@kustomrama.com if you have additional information or photos to share about Jim Green's 1949 Ford.