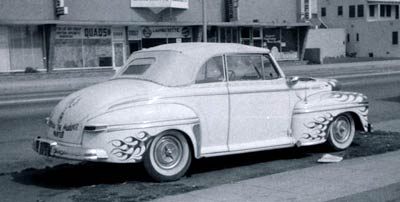 Dean Jeffries' 1947 Mercury Convertible of Lynwood, California. Restyled around 1955 - 1956, Jeffries dressed the Merc up with murals, flames and pinstriping. In 1957 he sold it to Jerry. 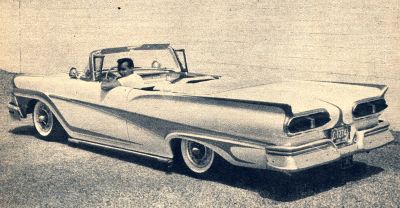 Jerry Halak's 1958 Ford Convertible. Restyled in 1958. It only took 42 days and $500 to transform Jerry's convertible into a nice custom.

Jerry attended Macomber and Woodward High Schools before going to barber school. He cut hair with his dad at the family barber shop, eventually changing the Lagrange Street shop’s name to “Jerry’s Barbershop.” According to Jerry's daughter, Denise Swy, Jerry would park his hot rod cars outside his barbershop, eventually realizing he could make more money and enjoy his time more if he did his car work full-time. So he did, launching a career of car painting and design that spanned the rest of his life. "He had a real flair for design. He really liked the idea of the beauty of the car" Denise told Zack Lemon of The Toledo Blade.[1]

Jerry worked for many years with John Cassaubon, who would stripe the lines on the cars that Jerry painted. Their shared work prompted a friendship that lasted more than 60 years; "We tried to make the best of whatever we did. Car guys seem to gravitate toward each other," John said to remember his old friend after he had passed away.[1]

Jerry was a founding member of the Pharaohs of Toledo car club. The club took Jerry around the country from car show to car show. “That was his life,” according to Denise.[1]

In the 1970s and the 1980s Jerry taught auto body work at Penta Career Center. He designed and painted throughout his life, and he completed his last car about a month before his death.[1]

Please get in touch with us at mail@kustomrama.com if you have additional information or photos to share about Jerry Halak.