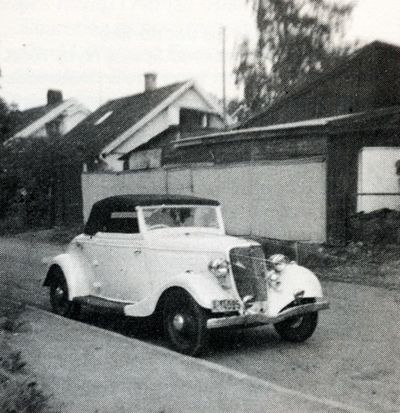 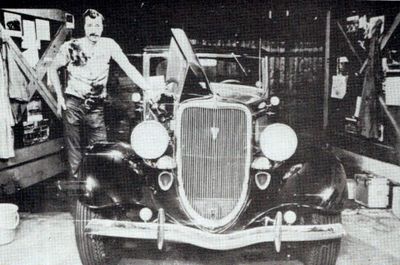 A photo of Jens with the Ford in his garage that was published in ACSN Newsletter Nr 4-1978.

1934 Ford cabriolet originally owned by Thomas Bukier of Frogner, in Oslo, Norway. Thomas found the old cabriolet during a vacation in the Summer of 1965. He was on his way to a cabin in Sandefjord with a friend, when he spotted the car in downtown Sandefjord. The old Ford was painted light grey, and it had the steering wheel on the right side. He followed the car to Haneholmvn. 35, where the owner was living. They started talking with the owner, and were invited in for a coffee. Inside, Thomas told the owner, a whale catcher, that he wanted to buy his car. The whale catcher told Thomas that he could buy the car November 1. 1965, as he was getting retired that day. The asking price was 2 000 Norwegian Kroners. Everything went as planned for Thomas, and November 1st he went to Sandefjord with 2000 NOK, and returned with a 1934 Ford.[1]

Thomas was 18 years old at the time, and he had an urge for a hot rod. He had a friend that ran a paint-shop at Bryn, and as he had no place to work on the car at Frogner, where he lived in an apartment with his family, he borrowed some space from his friend for the project. After buying it, he had an upholsterer at Alexander Kiellands plass make him a new cabriolet-top. During the build-up, Thomas towed the car all over the place. he had the grille, bumpers, windshield-frame and more chrome-plated. The hood and fenders were sandblasted, and new running-boards were made. A dropped front-axle was was bought from the United States, while a 283 Chevrolet V-8 engine was bought from Niels Taxt, a likeminded maniac located near Mosseveien in Oslo. Engine-mounts and a gear-shifter were ordered from Hurst, before Thomas installed the Chevrolet V-8. The engine was hooked to a stock 3-speed transmission. Thomas split the wishbone. Brackets bolted to the frame held the split wishbone. New kingpins were bought from Ellingsen & Co in Nedre Slottsgate. The kingpins were installed along with 1939 Ford spindles and 1948 Ford juice brakes. During the build up, Thomas ran out of space and money, so he sold the project to Jens Birkedal around 1967 - 1968. Jens, another Oslo hot rodder, lived at Grünerløkka. Jens was 15-20 years older than Thomas. When Jens bought the Ford, Thomas had installed the engine, dropped axle and more. In 2013, Thomas told Kustomrama that he had performed all of the easy tasks, while most of the complicated work was still undone. Thomas had never test-driven the old Ford with the overhead valve Chevrolet engine he had installed.[1] So when Jens got the project together, he became known as the first hot rodder of Oslo having an overhead valve engine in his car. When Jens bought the cabriolet from Thomas, he told Thomas that he wanted to install a Jaguar rear axle. According to Amcar Magazine Juni 1988, Jens' cabriolet featured disc brakes as well. The vehicle licensing department was not a fan of the build, and he had to visit them 13 times before he could get the car licensed.[2] Jens eventually sold the cabriolet. After selling it he bought another 1934 Ford cabriolet.[3]

Please get in touch with us at mail@kustomrama.com if you have additional information or photos to share about Jens Birkedal's 1934 Ford.