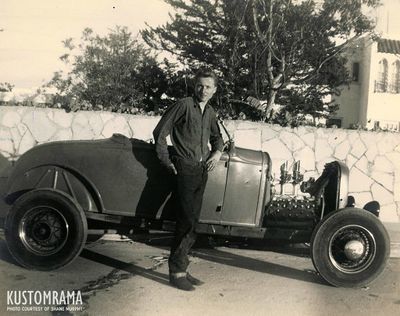 A photo of James with the roadster. Notice the bullet holes on the cowl. He got shot by the cops for stealing aviation gas from Long Beach Airport. Photo courtesy of Shane Murphy. 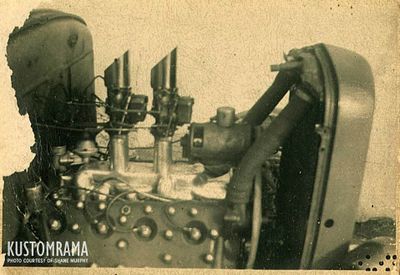 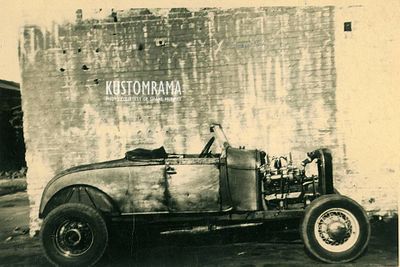 Jim installed a 1929 Ford body on the car after being shot at by the cops for stealing aviation gas from Long Beach Airport. This version ran a Model A four-banger engine with a Cragar OHV-Head. It had no gas-pump and mechanical brakes. Photo courtesy of Shane Murphy. 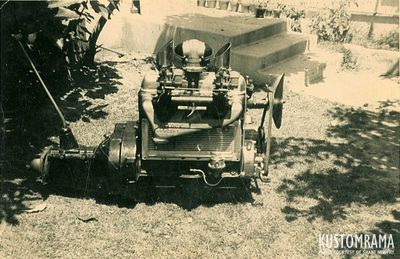 A 1932 Ford four-banger engine and transmission for everyday driving. Not for racing! This engine ran a Cragar OHV-Head, Duke Hallock-headers, and a V-8 distributor that was modified to fit the four-banger.[1] Photo courtesy of Shane Murphy. 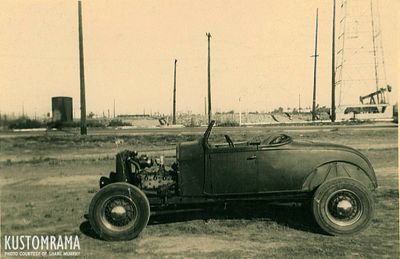 A version of the roadster that ran mechanical brakes and a 1932-1936 Ford V-8 engine. Photo courtesy of Shane Murphy. 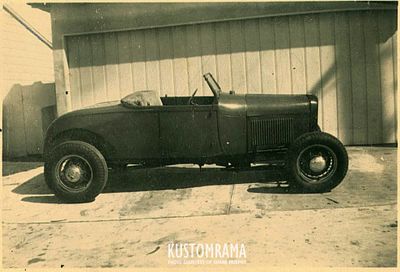 A photo of the roadster with the hood on. This version ran mechanical brakes, a 1932 Ford grille shell, and a chopped windshield.Photo courtesy of Shane Murphy. 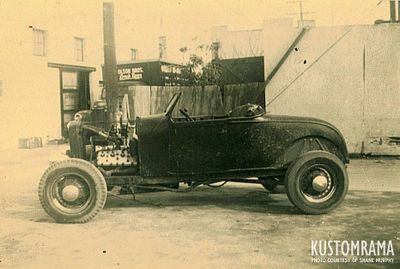 Another version of the roadster running a 1937 Ford 21 stud V-8 with a Weiand 1941 pre-war highrise intake manifold, mechanical brakes, and a lower positioned steering box. Photo courtesy of Shane Murphy. 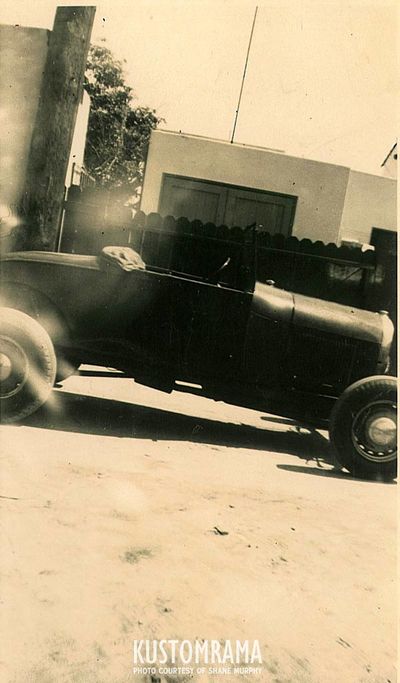 A version of the roadster running an un-chopped windshield, 1929 Ford Model A grille shell, hydraulic brakes and wide-five wheels.Photo courtesy of Shane Murphy. 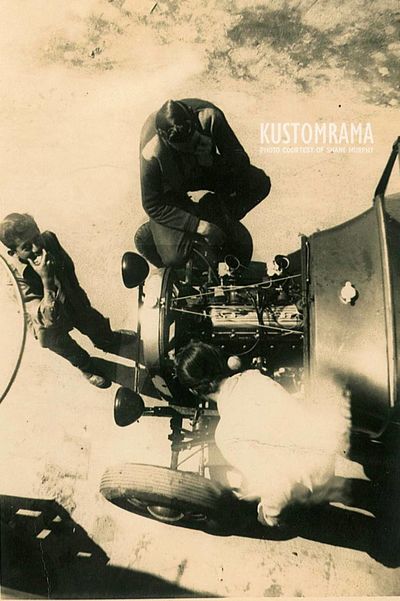 A photo of the roadster with the Cragar-engine taken from above. This version ran hydraulic brakes and 1936 - 1939 Ford wide-five wheels, but it did not have cross-over steering Photo courtesy of Shane Murphy. 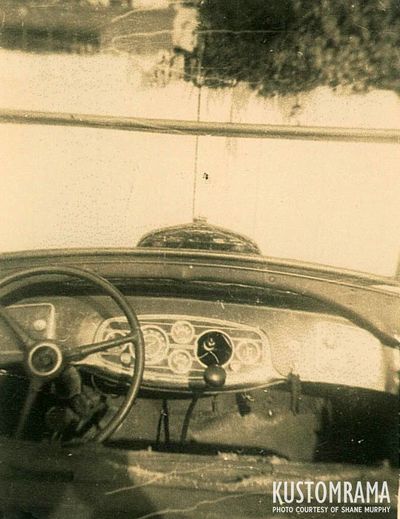 Jim ran a 1933 Pierce-Arrow dash and panel in the roadster.[1] Photo courtesy of Shane Murphy. 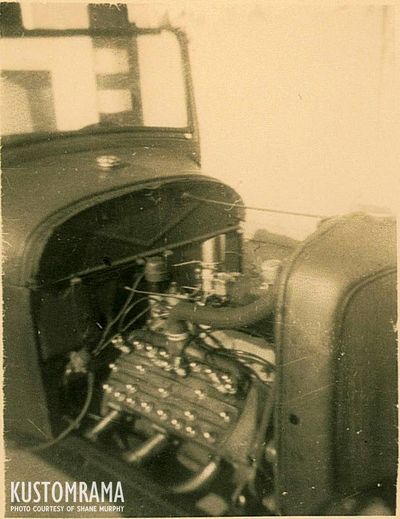 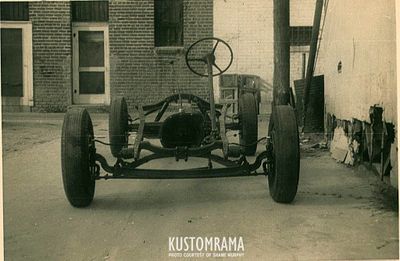 A construction photo of James roadster, showing a front view of the rolling frame. Photo courtesy of Shane Murphy. 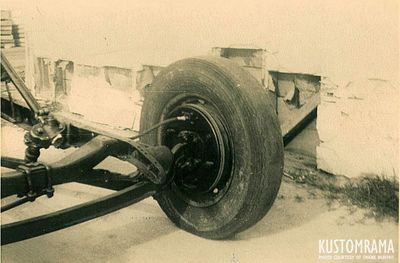 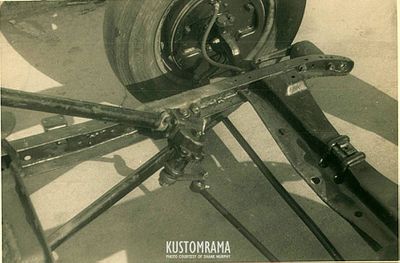 Jim's frame was fit with a 1935 - 1936 Ford steering box and a 1932 Ford crossmember for the transmission. The wishbone and peachbolts were also 1932 Ford. And it featured crossover steering. Photo courtesy of Shane Murphy. 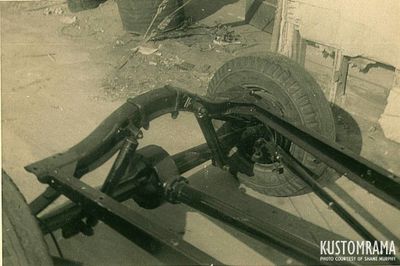 A rear view shot of the rolling frame. Photo courtesy of Shane Murphy. 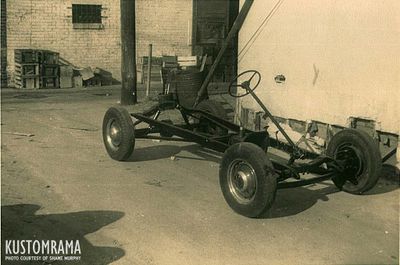 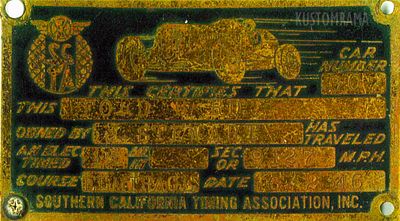 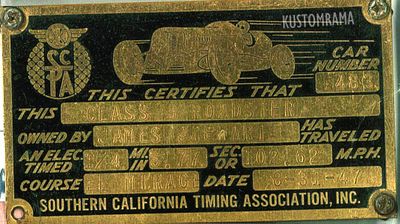 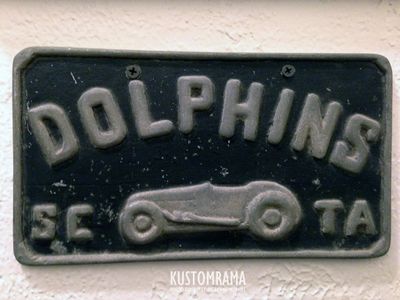 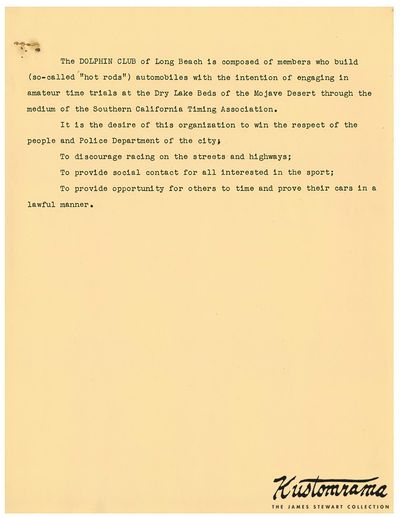 1931 Ford Model A roadster owned, built and raced by Long Beach Dolphins car club member James Stewart of Long Beach, California. At the age of 12, Jim and his identical twin William acquired an automobile engine to educate themselves on its structure and functionality. Unfortunately, at the age of 14, his father died leaving a wife and five children. Jim was awarded a hardship driver’s license at that age so that he could transport his mother who was a head registered nurse to work at Long Beach Community Hospital. Consequently, Jim’s relationship with automobiles began at an early age.[2]

After Jim served in the Marine Corps in World War II, he returned to his family’s home where he resumed his passion for working on his 1931 Ford roadster. In 1946, Jim joined the local car club named the Long Beach Dolphins with a few of his friends. El Mirage was the main location for official racing, however, that did not prevent the car owners from testing their cars’ speed on the streets. The club drivers were aware that the Bellflower police cars did not have the horsepower nor the speed that could match the Dolphins’ cars. The drivers would often challenge and outrun the police cars for some weekend excitement. Jim was so proud of his roadster he would often tell the story of receiving 3 speeding tickets in one evening from 3 different cities.[2]

James is listed as an entrant in the roadster class at the El Mirage August 18, 1946 SCTA time trials event, running as a member of the Long Beach Dolphins car club.[3]

According to Jim's grandson, Shane, Jim installed a 1929 Ford body on the car after being shot at by the cops for stealing aviation gas from Long Beach Airport; "The cops chased them and shot at them, but they got away. But not without a few bullet holes in the side. Look close at the right side of the body, and you will see the holes in the front quarter panel. The aviation gas is a higher octane, better for racing."[2]

By 1949, Jim had met the love of his life and wanted to start a family, so, he chose to resign from the club. However, he continued to find joy in working on the family cars over several years. He insisted that his daughters learn how to change a tire, the oil, and pump gasoline into the car before they could acquire a driver’s license. Also, as the grand kids became of age he enjoyed teaching them a thing or two about cars and how to handle them. One of Jim’s last responsibilities working for the City of Long Beach was as a defensive driving teacher for other city employees.[2]

Please get in touch with us at mail@kustomrama.com if you have additional information or photos to share about James Stewart's 1931 Ford.