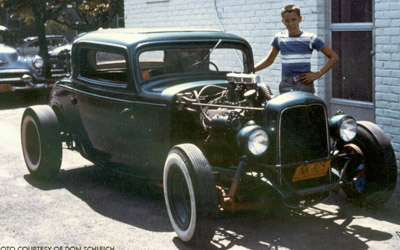 Jack Schleich of Oceanside, New York was a member of the Avenue Angels of East Rockaway car club. Around 1958 - 1959 Jack also acted as president of the club. In 1957 he bought a 1932 Ford 3-Window coupe that he turned into a full blown hot rod. Around 1959 - 1962 he worked at Bill Frick Motors, a company specialized in engine installationss and conversions, and the coupe was fit with many different engine set-ups while Jack owned it. By 1967 Jack ran his own boat-yard, and he sold off the coupe to get money he could invest in the newly established company.[1]

Please get in touch with us at mail@kustomrama.com if you have additional information or photos to share about Jack Schleich.