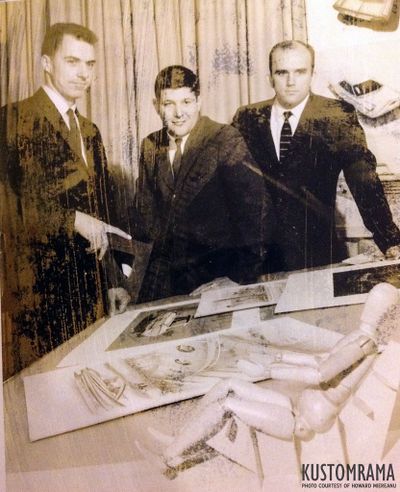 A photo of Howard taken at the GM Tech Center in 1960. In 2017 Howard told Sondre Kvipt of Kustomrama that the three of them were selected as stand-ins for a publicity photo showing head of design; " Chrysler's Virgil Exner, GM's Bill Mitchell and Ford's Henry Ford II. Left to right, George Angersbach as Exner, me as Mitchell and Andy Graybeal as Ford. All are Art Center grads and all were hired by GM at the same time." Photo from The Howard Miereanu Collection. 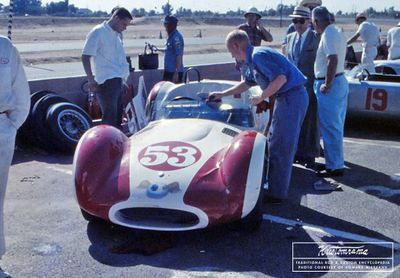 A photo of Bill Krause's Maserati Type 61 "Birdcage" racecar taken at the 1959 Riverside Grand Prix. In February of 2021 Howard Miereanu told Sondre Kvipt of Kustomrama that he met Billy Krause, as well as Dan Gurney, Richie Ginther and Phill Hill late in 1958, or early in 1959, when he was in his last semester at Art Center College of Design. "They all came to the school and wanted to see the auto designs we were creating. Our project was to design a futuristic race car. Billy liked one of my designs and asked if I would be interested in designing a paint scheme for his Birdcage. He told me that he was having Von Dutch paint the car. Wow…what an honor and I jumped at the chance and submitted a few designs and he selected the one you see on his car." Notice the flying eyeball that Von Dutch added to the nose of the car. Krause was Dutch's brother in law and in addition to the paint, he also lettered the Maserati. Photo from The Howard Miereanu Collection. 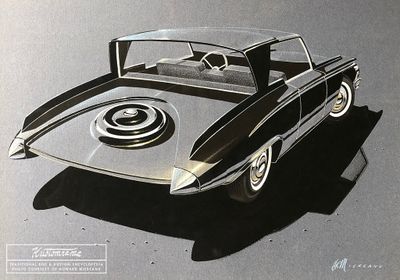 Howard believes he did this design in 1959, while he was still in Orientation Design Studio, before being placed in one of the Advanced Design Studios. "Lucky me! That was the "honey pot" of a studio to be sent to." Photo from The Howard Miereanu Collection.

Howard R. Miereanu is a well known graphic designer. With degrees in industrial design & graphics from the Art Center College of Design, Howard’s experience is wide-ranging; from an exterior automotive designer at General Motors (1959-1963), back to Los Angeles he joined a local furniture manufacturer as head designer and created a line of office furniture, moved on to be Senior Partner at Advertising & Sons (a boutique advertising agency in Beverly Hills), and finally to owner and founder of HRM Graphic Design (a Woodland-Hills-based graphic design studio specializing in packaging, corporate ID).[1]

Howard was born in New York City, New York in 1936. He moved to Los Angeles, California in 1947, and has been interested in cars, design-wise, as long as he can remember. While attending Alexander Hamilton High School in Los Angeles he received two summer scholarships to ArtCenter that sent him in the direction of the auto design field. After graduating from ArtCenter he landed a job at General Motors, and in 2019 he told Sondre Kvipt of Kustomrama that he was selected to be placed in an advanced design studio instead of any of the production studios at GM. "We designed many of the show cars, now called concept cars. I also was loaned out to a few production studios for a few months at a time to get "fresh blood" into their design work, Buick, Cadillac and Corvette, where the 63 split-window came from. "[1]

Howard recently relocated from Woodland Hills to San Juan Capistrano to relax in the beach area and continue working on the creation of his assemblages. Each one has a different theme and overall look. Howard also does commission pieces for individuals that are looking for just that special custom assemblage to give as a gift or dress up their home or office. He still loves auto design, and can be found at car shows such as the Pebble Beach Concourse d’ Elegance. "I’ve been attending this fantastic show for years and I’m a big fan of Ferrari. A few years ago I started a collection of digital photos of Ferrari road, competition and F1 cars, showing front and rear 3/4 view. I now have virtually photos of every Ferrari ever made. Each one is listed with the year, model and coach maker/designer."[1]

Please get in touch with us at mail@kustomrama.com if you have additional information or photos to share about Howard Miereanu.