A second version of the Chevrolet. This version was white with a black roof. 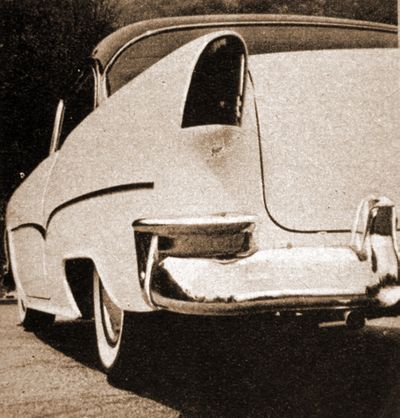 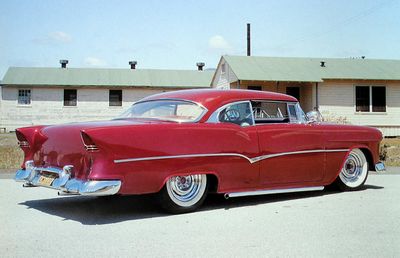 A chopped version of Harry's Chevrolet as it appeared when it was featured in Popular Customs Winter Issue 1963.

A photo of Hosking's Chevrolet was published in Car Craft February 1962. Taken at the San Diego Autorama in 1961 or 1962, Bill Duarte is listed as the current owner. Barris Kustoms are credited for the work on the car. Photo courtesy of Car Craft Magazine. 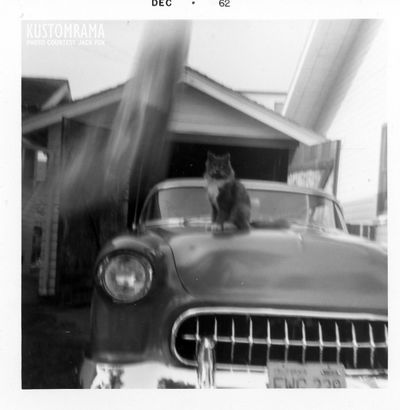 A photo of the Chevrolet developed in December of 1962. This photo was taken after Jack Fox bought it. Jack purchased the car from a relative of Hosking. At the time it was unknown to both Jack and them, as to who did the custom work. Photo courtesy of Jack Fox. 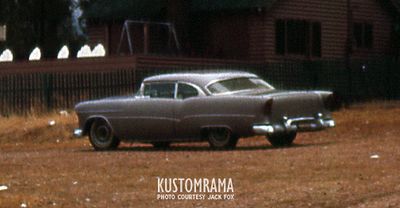 When Jack received the car, the color was a Violet, or as it was called then, Candy Plumb. It was repainted then to cover damage to the hood and top, from an engine fire. Photo courtesy of Jack Fox. 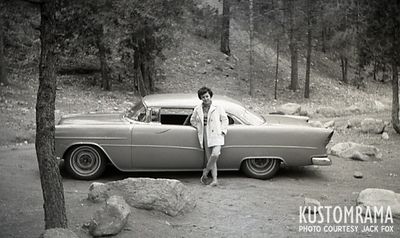 The longest trip Jack made with the car was his honeymoon trip to Zion National Park in Utah, and on up to the Grand Canyon north rim. Photo courtesy of Jack Fox. 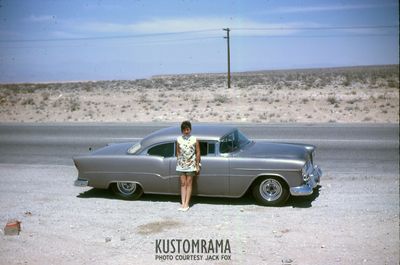 The car was Jack's everyday driver, and it turned a lot of heads. "The car was beautiful and ran great and of course I lived to regret selling it," Jack told Kustomrama in 2017. Photo courtesy of Jack Fox. 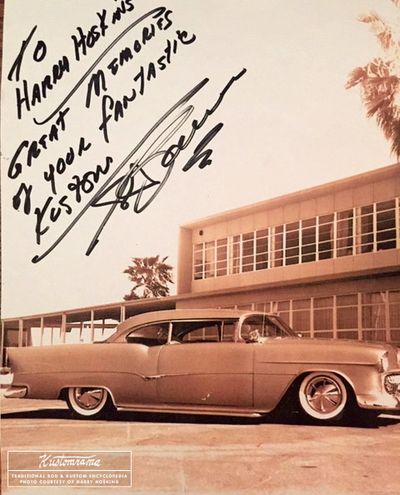 A greeting from George Barris to Harry. Photo courtesy of Harry Hosking.

Restyled by Barris Kustoms, Harry's Chevrolet featured 1955 Dodge Lancer side trim that was installed parallel to the dip in the side body panel. The side trim separated a two-tone paint scheme, consisting of black and pink. The door handles were removed, and pushbuttons were concealed in the side trim. The rear fenders were extended and modified to accept 1955 Lincoln taillights. Deck and hood were molded, and the hood corners were rounded. The grille was taken from a 1956 Chevrolet Corvette and molded directly into the gravel pan and shell.

White with a Black Roof

In Trend Book 143 Restyle Your Car from 1957 the car is shown white with a black roof.[1] Moderate lowering was accomplished in front, with a 5-inch drop at the rear.[2]

In 1963 Harry's car is featured in Popular Customs Winter Issue 1963. When the story was made, the car was still owned by Harry. This version of the car featured a chopped top. 2 1/2 inches had been taken out of the roof before the car had been given a Candy Cherry Pearl paint. By then, the 1955 Lincoln taillights had also been replaced with Packard units.[3]

A photo of the car was published in Car Craft February 1962. Taken at the San Diego Autorama in 1961 or 1962, Bill Duarte is listed as the current owner. Barris Kustoms are credited for the work on the car.[4]

Jack Fox of Long Beach, California owned the Hosking Chevrolet from 1962 until 1964. In 2017 Jack told Kustomrama that the car, in it's time, was truly a beautiful creation; "With the exception of the chopped top, it was by todays standards, a mild custom. My understanding was that the final work, the chopped top, was done specifically to win top honors at a San Diego, California custom car show in the late 50s. And the story was that it did do that. I purchased it from a relative of Hosking. It was unknown to me, and them, as to who did the custom work. I traded them my 1930 full fendered Ford coupe with a flathead v8 and $500."[5]

The Car When Jack Received It

When Jack received the car, the color was a Violet, or as it was called then, Candy Plumb. "It was repainted then to cover damage to the hood and top, from an engine fire. The wheels were standard GM but chromed and very rusty. The engine had a broken piston skirt, out of set valves, leaking fuel system, probably a cause of the fire?. The Powerglide trans leaked fluid nearly as fast as you could put it in. The whole car vibrated badly due to damage to the drive shaft. In other words, it was mechanically neglected to the max. I'm sure the hood was never raised at a car show." The dash was still Candy Apple Red with a little pinstriping. According to Jack, the pinstriping had to be done by a professional. Near the steering column, were three buttons in vertical order. Top and bottom buttons were for the doors and center for the trunk. The trunk had a hidden inside pull release for its operation if necessary. The doors did not. The doors were strictly electrically operated. If you lost power, you needed to be small enough to crawl out the window opening. The windows were manually operated. All windows operated perfectly and sealed well, Jack remembers. "The interior upholstery was 2" wide red velvet and white naugahide tuck and roll, including all panels and the headliner. The floor was done in red carpet low pile. I was told that the interior was done by Tony Nancy, one of Barris's friends. The package tray was also red velvet and white naugahide. The rear window wasn't glass, it was a type of plastic used in aircraft for windows, and was very sensitive to surface damage. It was somewhat hazed when I owned it."[5]

Jack rebuilt the engine in the car, removed the powerglide transmission, and installed a 3 speed stick shift with a floor shift adapter. "I installed Corvette valve covers, a chrome generator, and a few other dressup items, before I painted the engine and transmission black. The car was my everyday driver and turned a lot of heads. The longest trip was my wife and my honeymoon to Zion National Park in Utah, and on up to the Grand Canyon north rim. The car was beautiful and ran great and of course I lived to regret selling it, believe it or not, for $300. Yes, I would love to own it again and would restore it to its condition as when I owned it. I would probably upgrade the engine, trans, rear end and brakes." Jack sold the Chevrolet to an oriental gentleman. He believes he was Japanese, and abot 23 years old. "He responded to my classified ad in the Long Beach Press Telegram newspaper. This was in about April of 1964, in Long Beach, California. I hope it's still up and running somewhere nearby."[5]

Where is it Now ?

Jack Fox is currently trying to locate his old custom? Please get in touch with Kustomrama at mail@kustomrama.com] if you know what happened to the car after Jack sold it, or if you have any other info about it to share.

Please get in touch with us at mail@kustomrama.com if you have additional information or photos to share about Harry Hosking's 1955 Chevrolet.