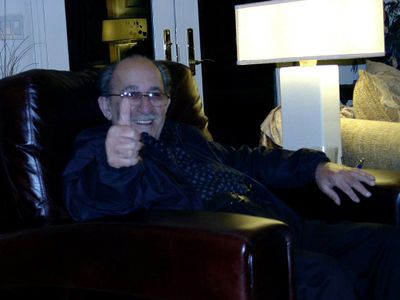 A photo of Baggy taken on his older days. Photo courtesy of Bill Moeller.

Harold A. “Baggy” Bagdasarian was for more than five decades a nationally-recognized master of custom car and hot rod showmanship and promotion.[1]

Harold was born in Fresno, California. He came to Sacramento in 1940, joined the Army, and married Willi, who was his partner, in life for 70 year. Harold went into the Army Air Corps in 1943, where he was a Ball Gunner. In 1947 he went into the Cab business with a company called “Capitol Cab Co”. A year later, In 1948, Harold and his brother Elmer built the first 5 minute Car Wash in the country.[1]

In 1950 Harold founded the Sacramento Autorama, as president of the Capitol Auto Club. His first show, one to settle an argument among two Thunderbolts’ members about which one had the most beautiful roadster, was held Armistice Day, 1950. It featured 22 cars, and was held at The Sacramento Capitol Chevrolet Co. “I made a $1.74,” he recalled in an earlier interview. The show grew, graduating to Sacramento’s Memorial Auditorium, then on to Merchandise Mart at the old State Fair Grounds, finally in 1970 to the Cal Expo.[1]

Harold managed and and worked out every detail for their shows. He was a believer in showmanship for the whole family and his productions always included a mix of entertainment for the kids to TV personalities for the adults. He was among the first showmen to screen continuous race car films. His ability to consistently showcase the finest available cars in a string of exhibitions was a tribute to his relationship with the motoring community, builders, stylists, painters, car owners themselves – and representatives of an expanding performance industry serving car enthusiasts everywhere.[1]

In 1955 Harold started Fox Theatrical Advertising, which were search lights for Grand opening of companies.[1]

In 1991 Harold started ”Rent A Fone”, a company that rented cell phone to state workers, and anyone that need a phone for a week or so, out on business trips.[1]

Harold passed away Thursday, October 16, 2014, in Sacramento, California. He was 91 years old, and he passed away peacefully with his family by his side.[1]

Please get in touch with us at mail@kustomrama.com if you have additional information or photos to share about Harold Bagdasarian.