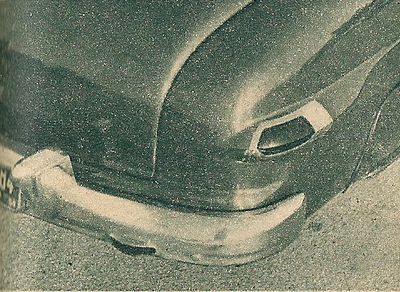 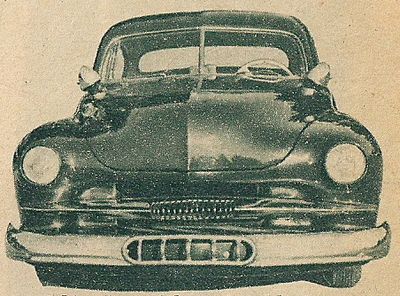 1949 Mercury owned by Hank Bisetti. Hank's Merc was shaved and decked, the hood was rounded, nosed and peaked. Theheadlights and grille shell were frenched, the grille was hand formed from flat stock. The grille layout on the front bumper was achieved with chrome-molly tubing which were bent to shape and plated. 1949 Buick taillights were crafted into the stock fender line. 1952 Cadillac exhaust tips were frenched into the rear bumper. The sidetrims were fit to give the car a lower appearance. The car was lowered by cutting the coils, adding lowering blocks and by stepping the A arms. Dual spotlights were added to give the roof a lower appearance, making a phsycical chop. The car rolled on white walls with Oldsmobile Fiesta Hubcaps. Once the bodywork was done, the Merc was finished in Moon-glow copper lacquer.[1]

Please get in touch with us at mail@kustomrama.com if you have additional information or photos to share about Hank Bisetti's 1949 Mercury.