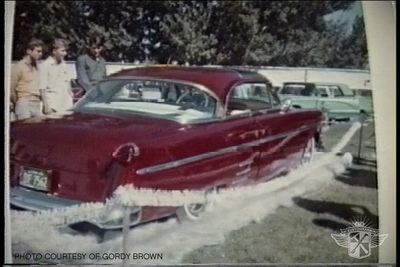 Gordy's Skyliner at an outdoor car show. Photo from the Gordy Brown collection. 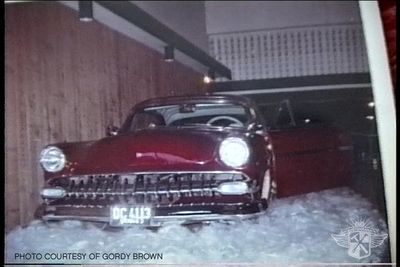 Gordy's Skyliner at an indoor car show. Photo from the Gordy Brown collection. 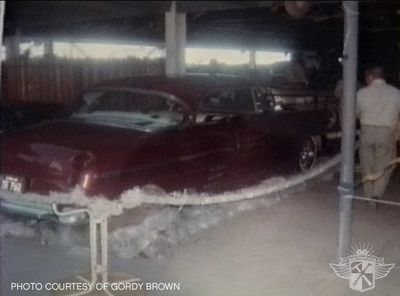 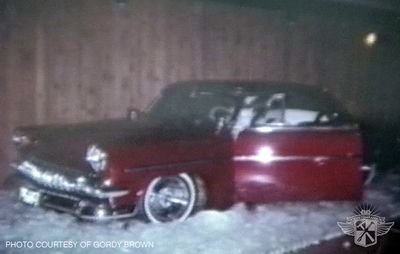 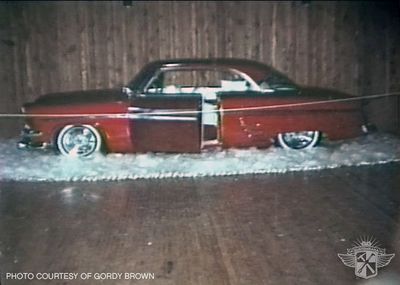 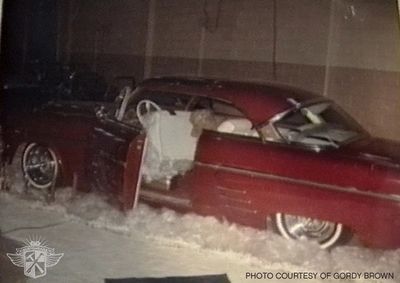 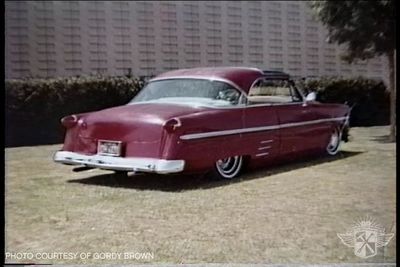 Gordy's Ford in California. This photo was taken after Gordy moved to California. Photo from the Gordy Brown collection. 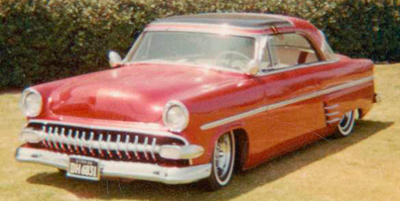 1954 Ford Skyliner owned and restyled by Gordy Brown of Salt Lake City, Utah. At age 16 Gordy bought a four years old 1954 Ford Skyliner that he chopped and turned into a very nice street driven custom. As custom paint was changing rapidly in the late 1950s with different hues of candy and pearls, Gordy decided to buy a second 1954 Ford Glasstop rather than strip the enamel paint off and repaint his first Skyliner. The first '54 was a street custom, the second one became a show car with a Candy Red paint job. The body was cleaned up by shaving the doors, hood and deck. Gordy kept the stock bumpers, but he filled the bolt holes and pounded out the flat spot behind the front bumper guards so it had the same shape as the rest of the bumper. The grille surround was molded to the body, and a modified 1954 Chevrolet grille bar was installed in the Ford. The grille bar had triple teeth, two between each stock tooth and one between the stock outside tooth and the parklights. 15 teeth in total. The hood corners were rounded before the hood was louvered. 1955 Oldsmobile headlights replaced the stock headlights, and the side trim was changed to 1954 Mercury side trim with the three chrome spears added to each side. The sides were opened up and converted into scoops under the spears. In the rear, taillights from a 1956 Oldsmobile 98 were installed. The car was lowered all around for a proper stance, and Gordy ordered chrome wheels with Spyder Centers and US Royal Masters from California. According to Gordy, these were the second set of chrome wheels ever to be brought into Utah from California.[1]

Once completed, Gordy's second glass top was shown in the early 1960s. Gordy built the car in Salt Lake City, but moved later on to California. After moving to California Gordy used to go over to Bill Cushenbery's shop and help him out. Gordy and Bill would go to lunch in the glasstop, and Gordy remembers Bill telling him that it was the first glasstop he had ever ridden in. He loved looking out the top.[1]

Gordy still owned his second glass top in 2012. By then he had begun restoring the car, and he had stripped the original candy red paint off. The interior dash and moldings had been painted a dark candy red to better match the red maroon in the interior. The interior had also been redone, and the top of the dash upholstered in tuck and roll.[1]

Please get in touch with us at mail@kustomrama.com if you have additional information or photos to share about Gordy Brown's Second 1954 Ford.