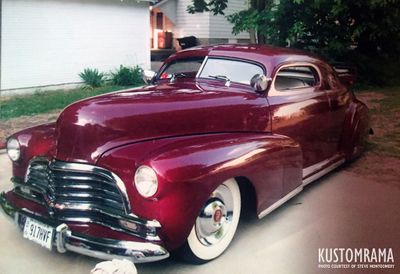 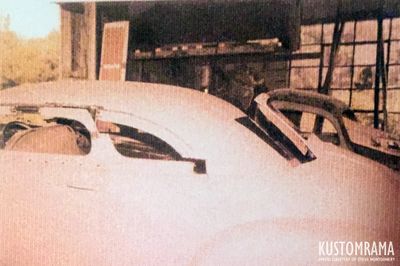 Photos taken during the chop. The top was chopped 4.75″ at the front and 6″ at the rear and the C-pillars were leaned forward after the quarter windows were removed. George Barris was reportedly consulted and assisted when the top was chopped. The stock rear window was replaced with a custom piece of glass cut from a Ford Granada windshield. Photo courtesy of Steve Montgomery. 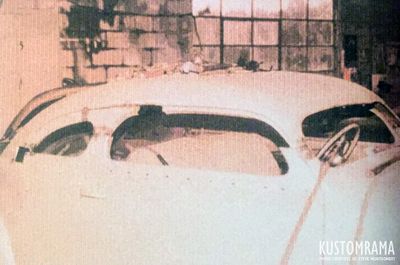 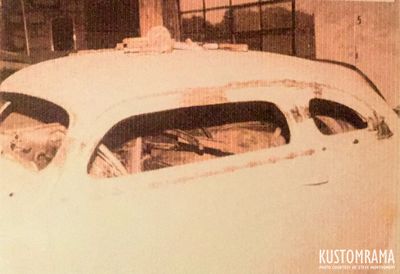 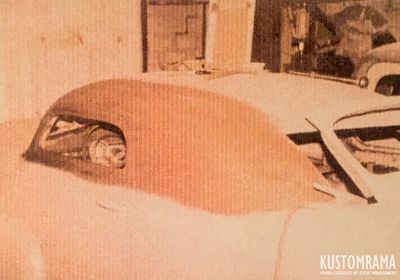 The Villan as it appeared when Glen completed the build in 1985. Photo courtesy of Steve Montgomery. 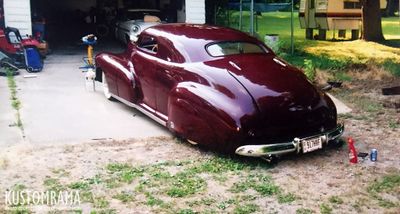 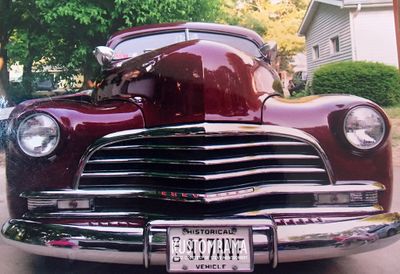 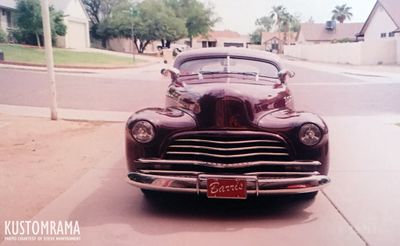 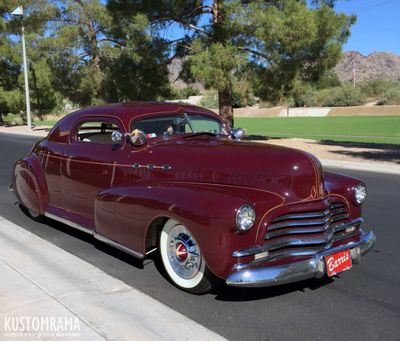 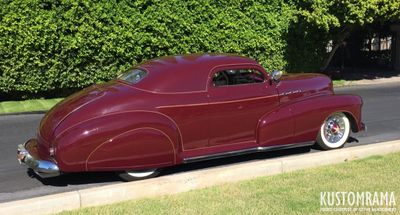 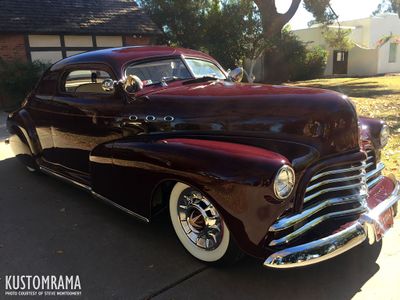 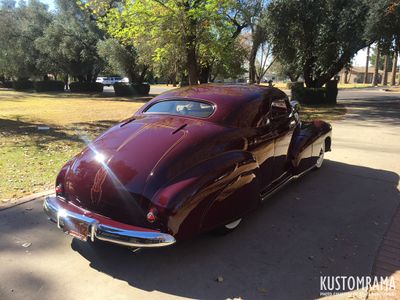 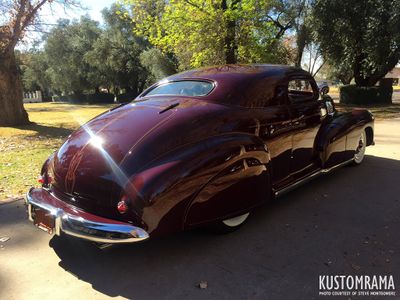 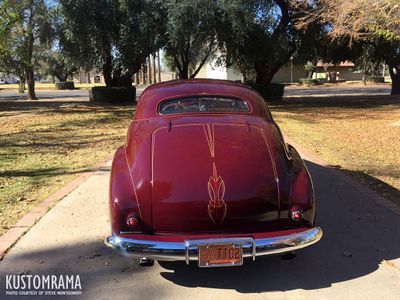 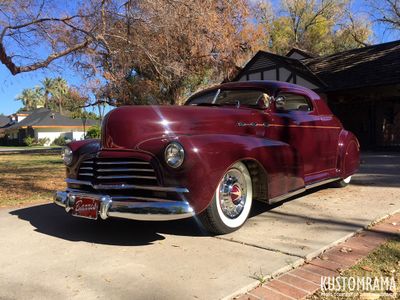 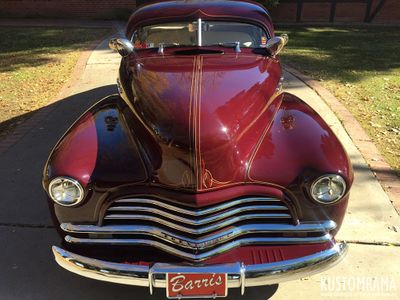 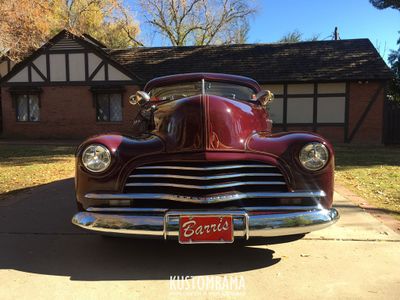 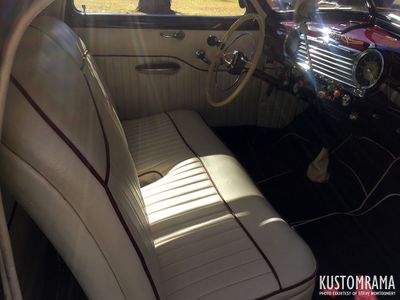 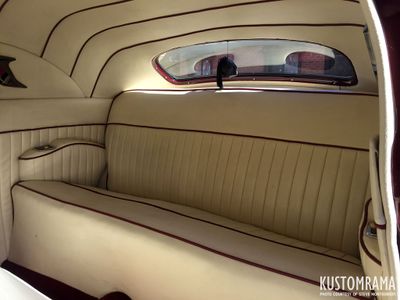 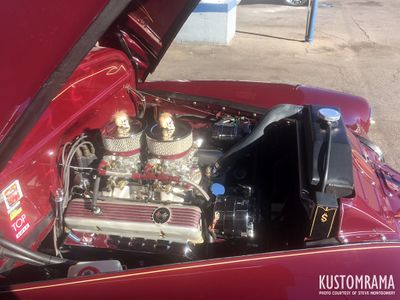 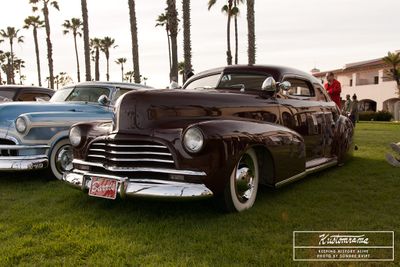 Steve Montgomery sold the car to Robert Gallery in 2018. When Robert got the car it has been through a few owners who all had added different things such as pinstriping, hubcaps, and more. When Robert got the car he decided to get it back to the way it was originally done. After completing the transformation, Roger brought the car to the 2019 Customs by the Sea car show in Santa Barbara where this photo was taken. Photo by Sondre Kvipt - Kustomrama.

The top was chopped 4.75″ at the front and 6″ at the rear. The rear quarter windows were filled in and the C-pillars were leaned forward. George Barris was reportedly consulted and assisted when the top was chopped. The stock rear window was replaced with a custom piece of glass cut from a Ford Granada windshield.[1]

Up front, the original grille was swapped for a 1946 Chevrolet grille. It was nosed, decked and shaved for door handles and most of its chrome before Glen molded the rear fenders to the body and finished it off in a Maroon paint job. Inside it received a white Naugahyde interior. Restyled in a 1940s look, custom accessories included 1940 Ford fenderskirts, dual Appleton 112 spotlights and Cadillac Sombrero hubcaps.[1]

As so many other traditional customs of the 1980s, the car received a modern driveline. Up front, it received a 1974 Chevrolet Nova front clip. The rear featured a 1980 Oldsmobile Cutlass suspension. The build was completed in 1985, and it became known as "The Villain," as a play off the bad guy in the James Dean movie "Rebel Without a Cause."[1]

In 2008 Glen advertised the car for sale on the Internet. By then it had been in storage for years. A friend of Jim Eckard of Glendale, Arizona came across the listing and tipped Jim about it. Jim called Glen, and a deal was made, before Jim had it shipped to Arizona. Jim refurbished the car after he got it, giving it a more modern appearance. Buick portholes were installed in the hood, along with 1957 Cadillac hubcaps and 1959 Cadillac taillights. Jim also had Chavo of Chavo's Pinstriping pinstripe it.[1]

In 2013 the car came third in the Early Custom class at the Gand National Roadster Show. It has also won Goodguys awards at regional and national level.[1]

Early in 2017 Jim and Theresa sold the car to Steve Montgomery of Phoenix, Arizona. When Steve bought the car, Air suspension had been installed in the rear to control the ride height. The air suspension was operated by a compressor. The drivetrain did also consist of a Chevy 350ci V8 with dual-quads and an upgraded camshaft, a TH350 automatic, and an Oldsmobile rear end. The interior was equipped with a working heat, A/C, and a modern stereo system.[1]

Please get in touch with us at mail@kustomrama.com if you have additional information or photos to share about Glen Patrick's 1948 Chevrolet.