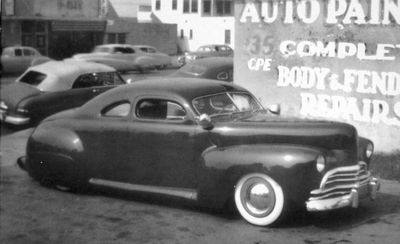 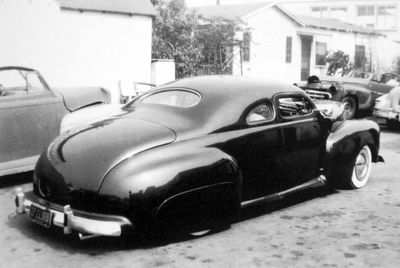 George's coupe outside the Barris Shop around 1951.[1] 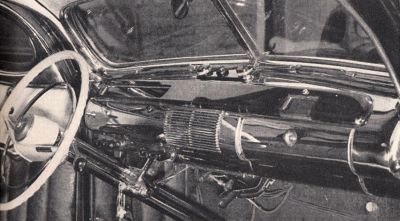 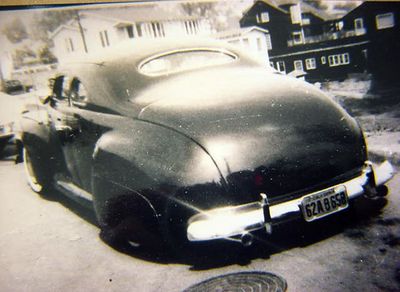 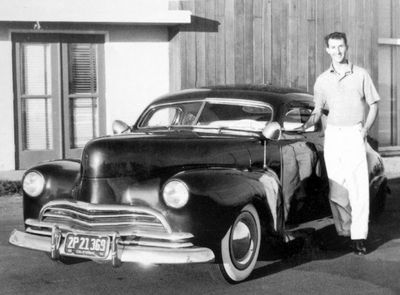 Paul Janich with his ride. 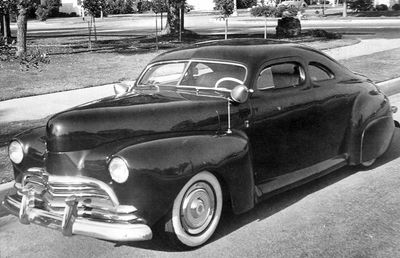 The coupe as it appeared after George passed it on to "Snooky". On this picture the car has received bigger bumper guards up front, new hubcaps, and Barris Kustoms crests on the cowl. 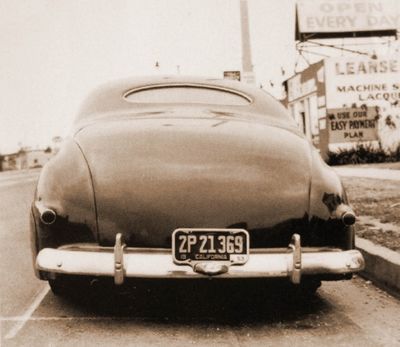 After "Snooky" got the car, the bumper guard taillights in the rear were replaced by 1939 Chevrolet taillights that were housed in tubes that were molded onto to the fenders. All work was done by Barris Kustoms. 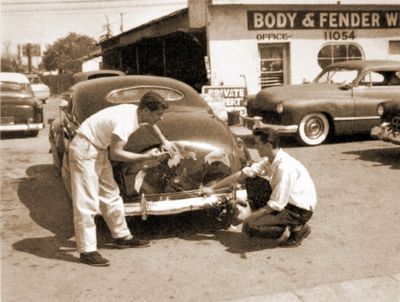 In 1953 a closely following motorist crashed in to Snooky's Coupe. 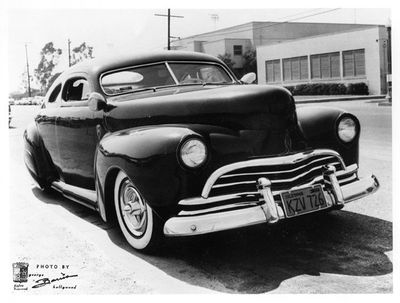 This picture shows the car after Dean Jeffries pinstriped it and after it was fit with 1956 Oldsmobile hubcaps with accessory spinners. 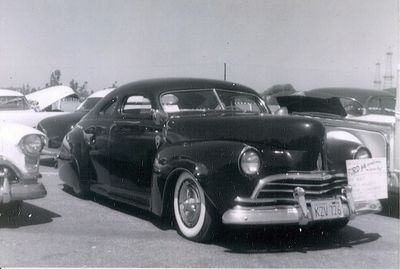 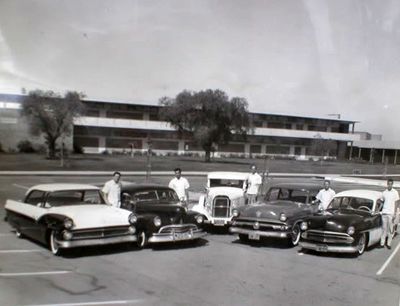 The car as it sat after George Mallory bought it in 1973. 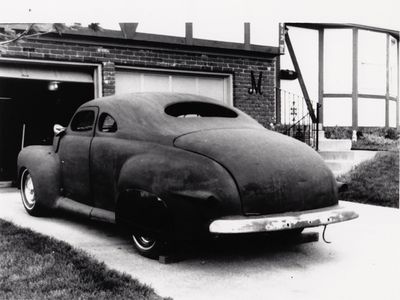 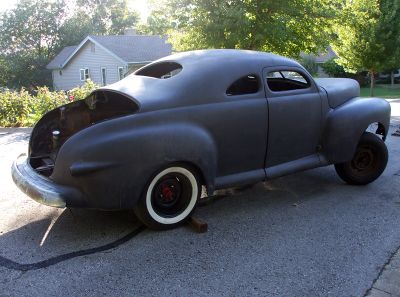 The Coupe as it sat in 2010, only months before its planned showing at the 2011 Grand National Roadster Show. 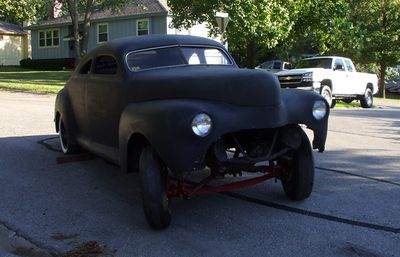 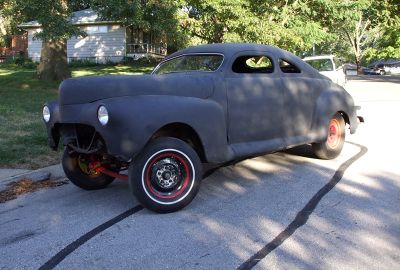 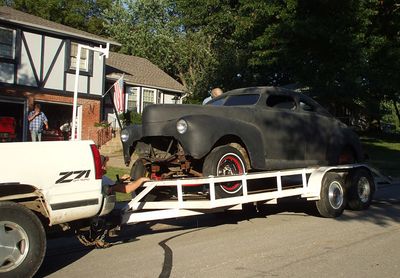 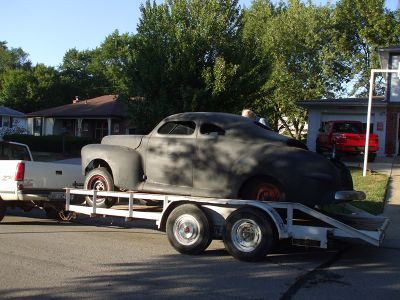 1941 Ford Business Coupe restyled by Barris Kustoms for George Janich of Long Beach, California. George had Sam Barris customize the car in 1946 and the work went on until 1948.[2] Sam chopped the top about 4 inches, removed the drip rails, leaned the windshield back, and set the rear window into a new position. The body was de-chromed, removing handles and moldings. The front end was modified to accept an altered 1946 Chevrolet grille. A small key lock was placed in the grille to unlatch the hood. The headlights were frenched and extended and the stock bumpers were replaced by 1947 Ford bumpers. The running boards were removed and replaced by "blister-type" running boards that Sam rolled from sheet-metal.[1] Doors and deck lid corners were rounded and the fenders were molded-in to give the car a cleaner appearance.[3] The stock taillights were removed, and replaced by new taillights made out of red lucite that were integrated into the bumper guards. Dual Appleton spotlights, fender skirts and Baby-Moon hubcaps were added. Once the car was finished, it was painted dark green metallic.[4] The total cost of customizing cost George about $2000.[2]

In 1952 George bought himself a brand new 1953 Mercury, so he passed the coupe on to his 16 year old nephew Paul "Snooky" Janich, who would become a member of the Renegades car club. Paul wanted to freshen the car up, so he brought it over to Barris Kustoms for a makeover. New and bigger bumper guards were installed in front, while the bumper guard taillights in the rear were replaced by 1939 Chevrolet taillights that were housed in tubes that were molded onto to the fenders. The car was also given new and more modern hubcaps and Barris Kustoms crests were placed on the cowl sides. In Rod & Custom August 1953 Snooky's coupe is shown with a crashed rear end and according to the story Snooky had tangled with a closely following motorist the night before. As time went by, the car received some more minor modifications, such as 1956 Oldsmobile hubcaps with accessory spinners, and pinstriping by Dean Jeffries.

The car was later sold to Sedalia, Missouri. And rumor has it that three locals went to California, and came back with the car. In Sedalia it changed hands several times, and at some point the title was lost and the price of the car was most likely a reflection to no title as the price ranged from $25.00 to $75.00. When the car left Sedalia it was seen at a Whiteman Air Force Base west of Sedalia where it escaped a fire at the base hobby shop. In the early 1970s it was spotted north of the Missouri river near Liberty, Missouri.[5]In 1973 the car resurfaced in Kansas City, Kansas. Not long after the car was found, George Mallory of Shawnee, Kansas was able to buy the car. It was a friend of George's who had found it and he had bought it with the intention of restoring and selling it. When George's friend found it, it was one day away from going to the crusher. The engine and drivetrain were gone when George got the car. In a featured story in Rodder's Digest about the car being found, George told that he wanted to install a six-carb 364 inch nailhead in the car.

When George got the car, it had been lowered by installing a dropped I-beam axle in front, and by C'ing the frame in the rear. The inner wheel wells in the rear were also raised. The lowering was most likely done by Barris Kustoms when the car was restyled for George Janich. By 1973 the interior was nearly gutted, but there were enough remnants of the rolled and pleated Naugahyde to serve as samples for a new interior. Since 1973 the car has been stored safely inside and very little work has been done to it. In 2010, the car was invited to be shown at the "Customs Then and Now" exhibit at the 2011 Grand National Roadster Show. In order to make the show, George and his twin brother Steve Mallory are currently working on the car, making a very good effort of restoring it back to the first version when it had smooth hubcaps and taillights integrated into the 1947 Ford bumper guards. The restored version will also have a flathead, and not the Buick Nailhead that Steve first planned to put in it.[6]

Please get in touch with us at mail@kustomrama.com if you have additional information or photos to share about George Janich's 1941 Ford.