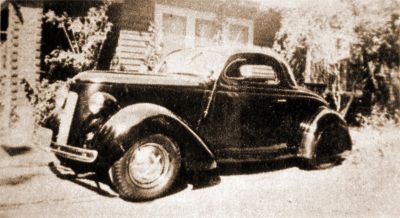 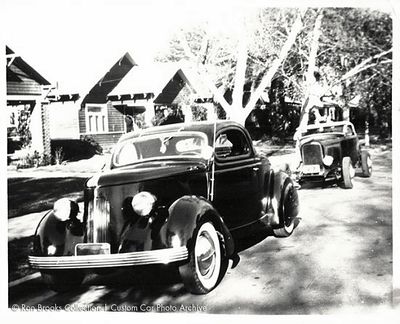 Photo from the Ron Brooks Collection, courtesy of The Custom Car Photo Archive.

1936 Ford coupe owned and restyled by George Barris of Roseville, California. George bought the car from money he had earned while doing some odd jobs for Harry Westergard at Brown's Body Shop. He worked on the car between the staggering amount of school work, and working with Westergard. Over a period of time he set in the rear license plate, chopped the top, removed the running boards, altered the taillights, lowered the car, added skirts, ripple discs, ripple bumpers, an antenna on the cowl, and a spotlight. He installed solid hood sides, changed the grille, removed all exterior handles, push buttoned the doors and deck lid, and finished off the job with a superb lacquer paint job. George completed the build in 1941.[1]

Later on, George traded the coupe for a 1936 Ford convertible.[1]

Please get in touch with us at mail@kustomrama.com if you have additional information or photos to share about George Barris' 1936 Ford Coupe.