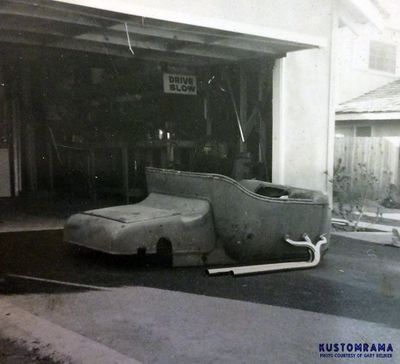 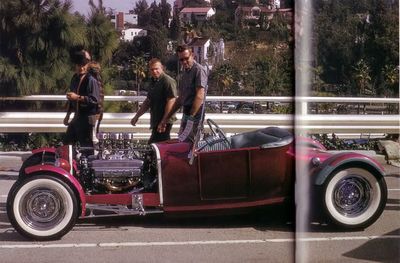 A rare color photo of the Candy Burgundy Metalflake version of Gary's roadster. 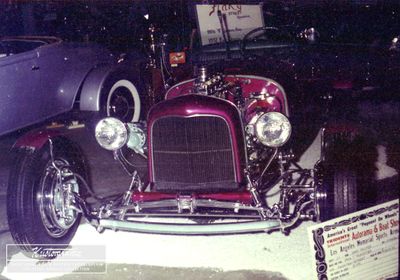 Gary's roadster as it appeared when it was featured in Rod & Custom May 1962. This version was painted in a Kandy Burgundy Metalflake. 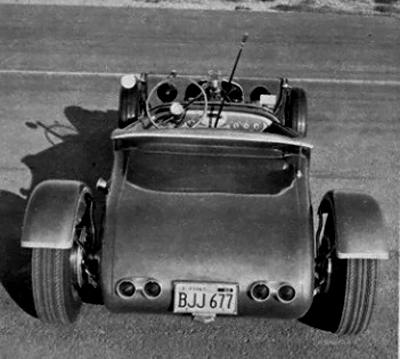 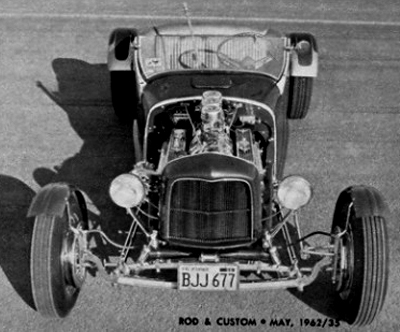 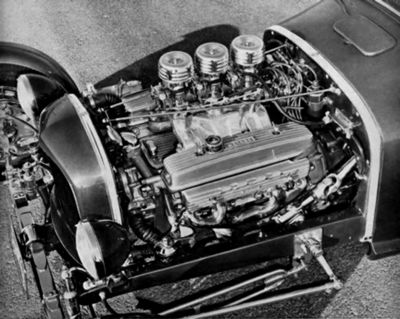 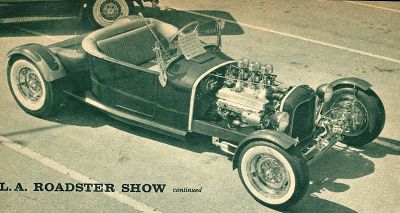 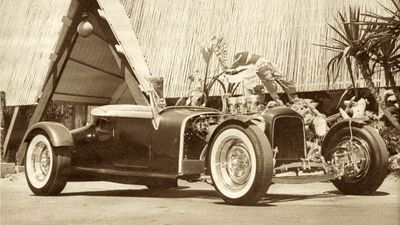 When Gary's roadster was featured in Hot Rod Magzine July 1962 it had been repainted in a wild green over flake color. This photo was taken outside the Lawndalel Tiki Kai restaurant. 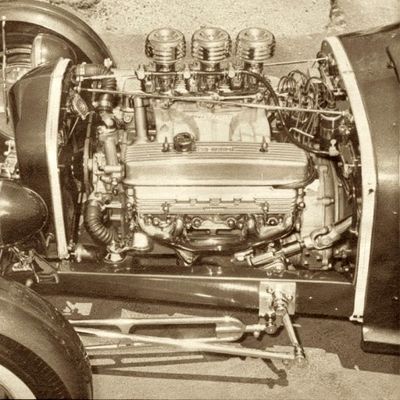 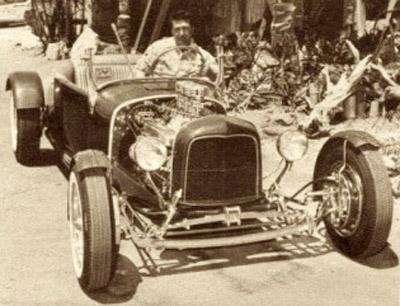 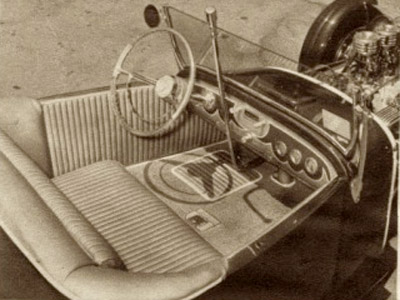 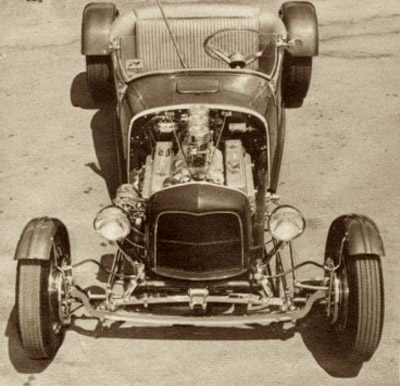 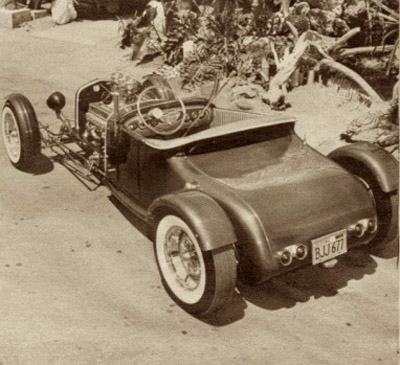 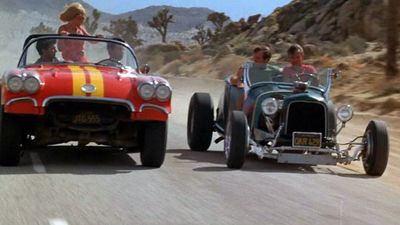 Gary's roadster as it appeared in the 1967 movie Hot Rods to Hell. 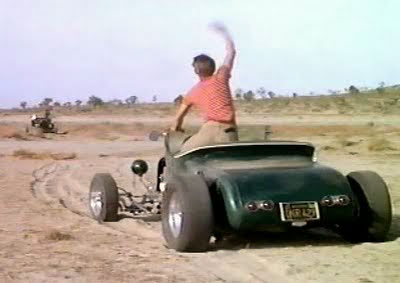 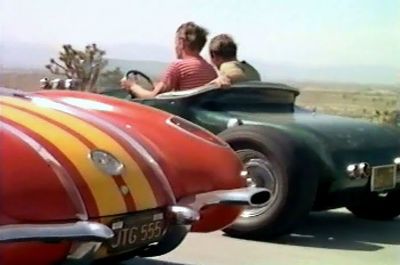 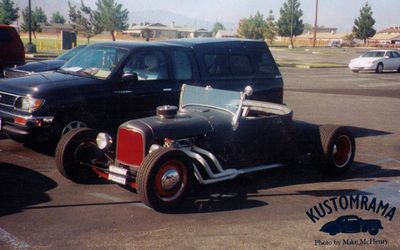 In 1997 Mike McHenry bought this Model T from "Bondo Al." Rumors had it that this was Gary Heliker's old hot rod. Photo courtesy of Mike McHenry. 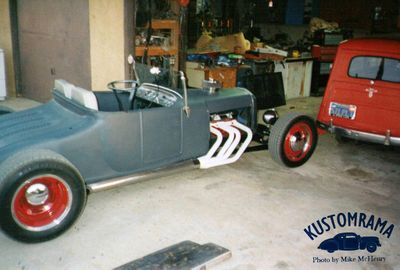 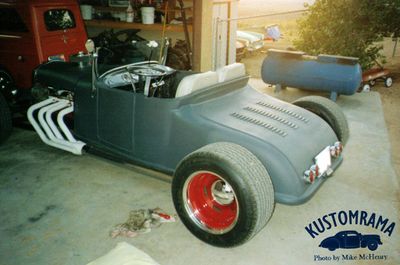 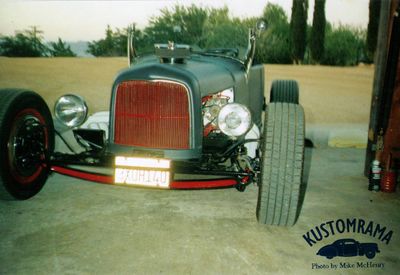 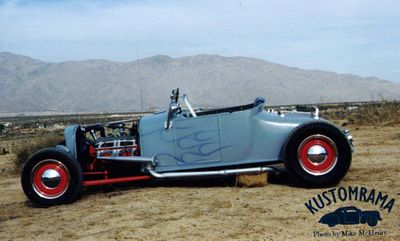 The roadster as it appeared after Mike first got it running in 1998. Photo courtesy of Mike McHenry.

After Mike had reworked the roadster he met Ray Martinez at Tom's Burger, a local cruise spot around 1999. Ray told Mike that that the body was originally a pickup that was raced as a modified in the late 1940s. When SCTA closed the modified class, the turtle deck was welded on so the car could still be driven in the roadster class. Thus the drop from the tub to the top of the turtle deck. Ray also told Mike that this photo from Don Montgomery's book "Hot Rods as they Were" shows the roadster as it was driven in the modified class. Photo courtesy of Don Montgomery. 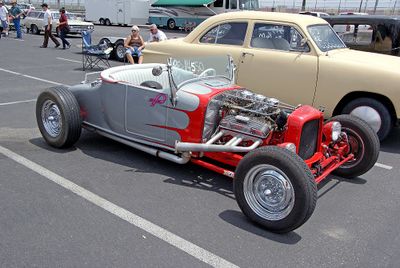 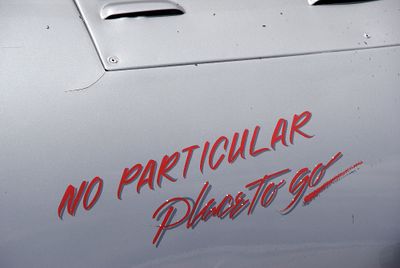 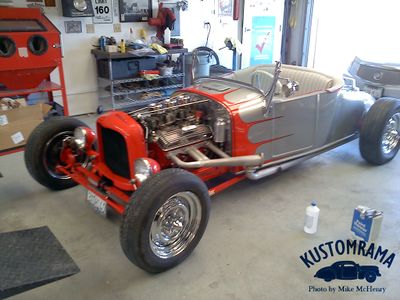 Mike's roadster as it appeared in 2013. Photo courtesy of Mike McHenry. 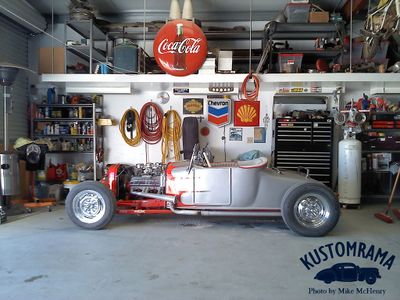 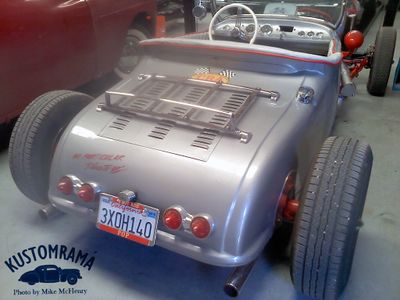 The body on Gary's roadster was channeled 6 inches, the width of the 1932 Ford frame it was mounted on, and a peaked roll was added to the bottom of the body.[1] The body was welded to the frame.[2] When the car was featured in Hot Rod Magazine July 1962 the trunk was welded shut and fit with taillights from a 1961 Oldsmobile F-85 station wagon. The front fenders were made from old Ford spare wheel covers and the grille shell was a cut down 1932 Ford unit. The front end consisted of a chromed suicide-mounted 1932 Ford axle with a 2 1/2 inch drop, a pair of Delco 50/50 shocks and 1940 Ford brakes. The rear end was from a 1932 Ford with '40 brakes. Gary installed a powerful 322 cid Nailhead V-8 from a 1955 Buick between the frame rails. The engine had 9:1 ratio domed pistons, and put out 250 horsepowers. The engine was ported, polished and ran an Offenhauser three-carb manifold and Weiand valve and spark plug covers. A Cragar adapter connected the engine to a 1939 Ford transmission. The flywheel was Buick with a Ford pressure plate, gears were from a Lincoln Zephyr. The steering was handled though a modified 1934 Ford column with a U-joint inserted. Getting the steering gear to clear the engine was a major construction problem for Gary. Once completed, the roadster was painted in Kandy Burgundy Metalflake.[3] A photo from the Tridents Rod Custom Autorama indoor car show shows it displayed next to a sign that said "Flaky Street Roadster."

The upholstery was Jade Mist Green Naugahyde rolls and pleats by Auto Interior. It rolled on reversed and chromed 15 inch Mercury wheels. When Gary's roadster was featured in Hot Rod Magazine July 1962 Gary told the reporter that he had owned 6 rods and 2 customs prior to the 1926 Ford. At the time, the car had also been repainted a wild green over flake.[1]

Gary's roadster was featured in the 1967 movie Hot Rods To Hell. He sold it about the time the movie was made, and in 2011 he told Kustomrama that he couldn't remember who he sold it to.[4]

According to rumors, the car wound up with "Racer" Ray Martinez of Lucerne Valley, California. There are some inconsistencies in the stories, and It is not known whether or not Gary sold the car to Ray, or if it was a collaboration. In 1997 Mike McHenry of Apple Valley, California spotted the car in the Stater Brothers' grocery store parking lot in Apple Valley. He fell in love with the look of the car, and asked it's owner, a guy called "Bondo Al", if it was for sale. Mike wound up trading it for a 1982 Toyota 4x4 pickup. When Mike got the car, it had some issues, so he completely reworked it in 1998. After reworking the car Mike met Ray Martinez at Tom's Burger, a local cruise spot around 1999. Ray told Mike that that the body was originally a pickup that was raced as a modified in the late 1940s. When SCTA closed the modified class, the turtle deck was welded on so the car could still be driven in the roadster class. Thus the drop from the tub to the top of the turtle deck. Ray also told Mike that the center photo on page 107 in Don Montgomery's book "Hot Rods as they Were" shows the roadster as it was driven in the modified class. Looking underneath the body of the car, Mike sees several ancient fastener springs for removable panels that seems to fit with the flats racer story. Ray told Mike that he removed the body and grille shell from the '32 Ford frame and that it was sold to "Bondo Al", who tossed the car together on a 1929 Ford Model A frame with a 350/359 Chevrolet setup. When Mike bought the car from Al, Al had part of the Rod & Custom May 1962 article with photos, so Mike realized that it did have some history. Mike fitted the 350 engine in the car with an Ak Miller turbocharger for a while, but after blowing up the second engine he decided to stay with the three deuces. Mike still owned the car in 2013. He could confirm that the car is a blast to drive, and he has run it several times at the Antique Nationals both in Palmdale and Fontana.[5]

In 2015 Gary Heliker met Mike McHenry to check out his old hot rod. According to Gary, everything about Mike's car had been changed in some way and there was nothing on the car that was like he did it. After meeting Mike, Gary was not sure if Mike's Model T was his old hot rod.[2]

Please get in touch with us at mail@kustomrama.com if you have additional information or photos to share about Gary Heliker's 1926 Ford.