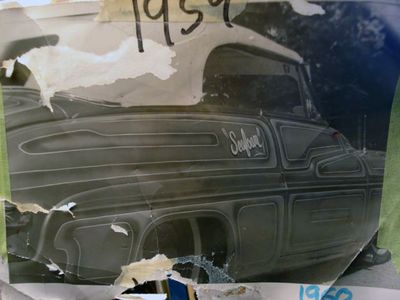 Gary Glenn's 1950 Mercury convertible. This was Gary's first car; "I sold my Allstate scooter and paid $200 for this 1950 Mercury convertible. The year was 1959 and I was in love with this car and Terri. I was already pinstriping dashboards and lettering names on friends cars. My dad gave me $1.00 each morning. 50 cents for 2 gallons of gas at Charlies Zepher Station on Michigan Ave, and 50 cents for hamburger, fries, and coke at McDonalds on north U.S. 27. I tried my best to do a "Larry Watson" panel paint on that Merc. My girlfriend upholstered that car in white naugahyde , sewing rolls and pleats on mom's sewing machine."[1] Photo courtesy of Gary Glenn. 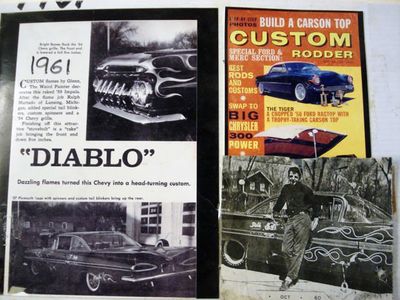 A photo of Gary, taken when he was laying out flames on Ralph Hurtado's 1959 Chevrolet Impala. The car wound up in Custom Rodder Magazine in 1961. Photo courtesy of Gary Glenn. 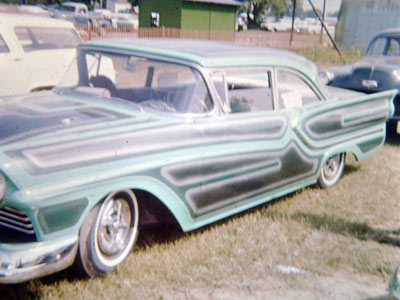 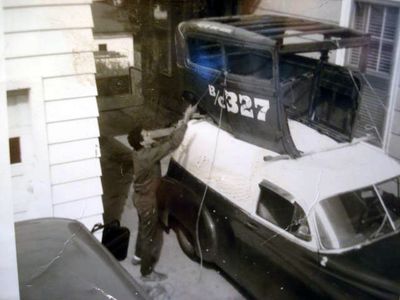 Back in 1961 Gary used a 1930 Ford Model A sedanbody for a dog house. When he sold it, he delivered it tied to the top of his first sign-truck, a 1952 Chevrolet Sedan Delivery. Photo courtesy of Gary Glenn. 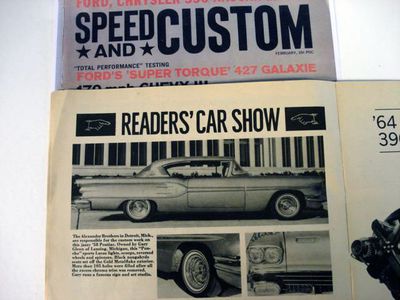 Gary Glenn's 1958 Pontiac was featured in the "Readers' Car Show" section in Speed and Custom; "Alexander Brothers in Detroit did the bodywork I think in 1962. I couldn't afford them to paint it Candy Lime, and I displayed their PAINT ESTIMATE on my wall for years. It was $380.00!!!!!!!"[1] 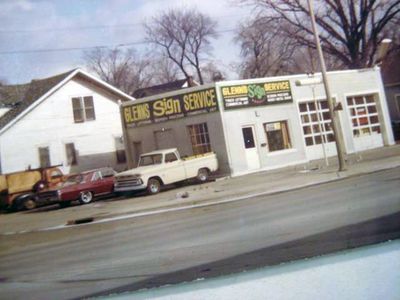 A photo of Gary's first real shop at Saginaw and Center Streets in Lansing. Gary stayed there from 1963 to 1969. Gary's 1964 Pontiac is parked in front of the shop. Photo courtesy of Gary Glenn. 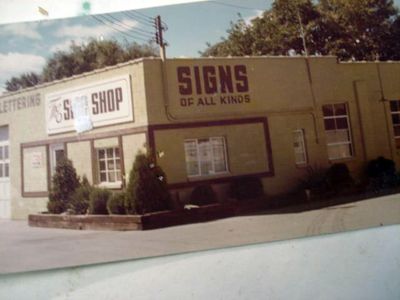 Gary's second shop was located on Rosemary Street in Lansing. Gary stayed there from 1968 - 1977. Photo courtesy of Gary Glenn. 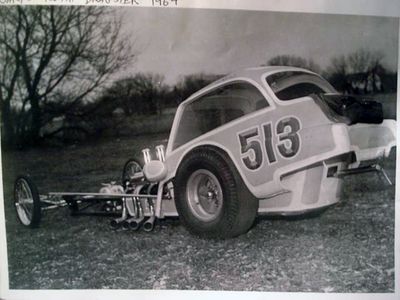 A photo of Gary's dragster from 1969; "In this photo the car was bright yellow with white graphics.....copying my favorite dragster at the time.."Greer-Black-and Prudhomme."[1] 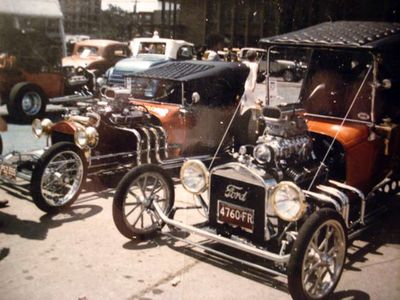 A photo of Gary's first Ford Model T roadster. Gary bought it from a guy in Detroit in 1970 at the Autorama. After buying the car, Gary formed the Mid-Michigan Street Rod Association. The roadster was sold to Don Terrill, so Gary could buy another Model T roadster. Photo courtesy of Gary Glenn. 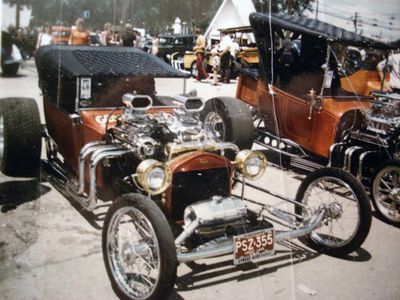 Gary's second Model T roadster. Gary bought the car from Don Kendall in Chicago in 1973. Gary sold the roadster at the 1975 Tulsa Nationals. He took the money and bought a new Chevy Van off the showroom floor. He immediately chopped it 8 inches. The Northstar was born. Photo courtesy of Gary Glenn. 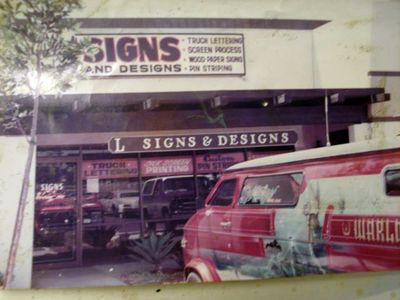 Gary's shop in Orange, California. Gary stayed there from 1977 to 1983 Photo courtesy of Gary Glenn. 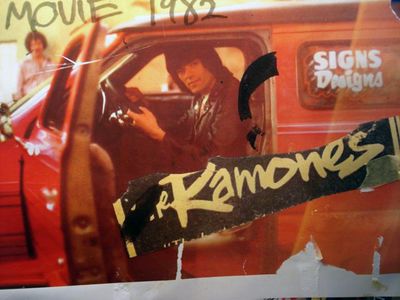 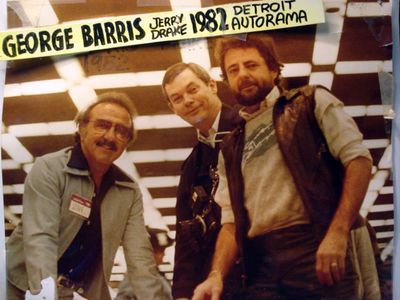 George Barris, Jerry Drake and Gary at the 1982 Detroit Autorama. Jerry was three years older than Gary, and he was his best friend and role model; "Jerry was a very accomplished striper and signpainter. I was jealous because he did all the guy's from Sexton with new Pontiacs and custom cars from Cooper Body Shop, while I mostly did the poor guy's older cars from Eastern. I watched and learned every move he made. Jerry got me connected with Carl Casper. It's ironic but if Jerry Drake wouldn't have STOPPED painting, I certainly wouldn't have had the success that my life was. He sorta "handed" me this town in 1960 or so. Great guy!!"[1] Photo courtesy of Gary Glenn. 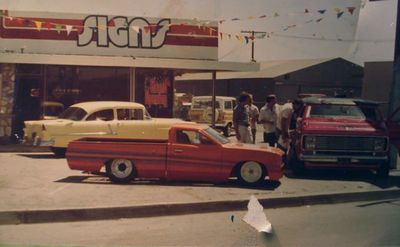 Gary ended up having two shops in Southern California. The second one was on Katella Blvd. in Stanton; "I grabbed Bob Goellner right out of L.A. Trade Tech and he ran the Stanton shop for 3 years for me. I finally sold the business to him cause I was closing the Orange location, because of those vinyl guys killing the truck lettering business for me." Photo courtesy of Gary Glenn. 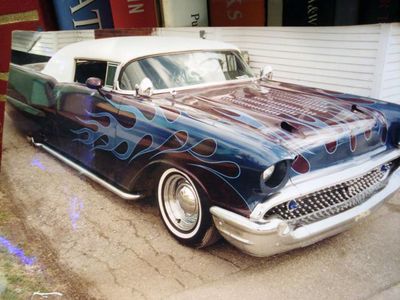 Gary Glenn (1941 - 2013) was a custom painter and pinstriper from Lansing, Michigan. In the 1960s Gary and Jerry "Spider the Crazy Painter" Drake were bitter rivals as custom car painters and pinstripers in their hometown of Lansing. Over the years they found out that they had a lot in common, so when Jerry quit painting in the early 1970s he sent a lot of work Gary's way.[2]

In 1976 Gary bought a brand new Chevrolet Van off the showroom floor. He chopped the top on the brand new van 8 inches, before he turned it into a show car called the "North Star." The "North Star" was featured on the cover of Popular Hot Rodding July 1976; "Less than a year later, I repainted and re-did the interior." The new version was named the "Warlock."

In March of 1977 Gary moved to California, and he opened up a shop in Orange.

The "Warlock" version of Gary's van was used in the movie "Rock 'n' Roll High School," featuring the Ramones.

Gary eventually moved back to Lansing again, where he opened up a new shop.

Please get in touch with us at mail@kustomrama.com if you have additional information or photos to share about Gary Glenn.