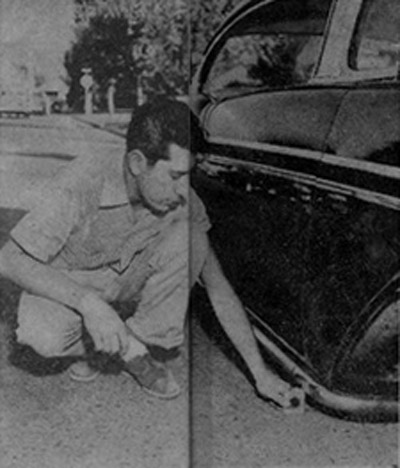 Frank with his radically lowered Chevrolet as it appeared in August of 1957. Photo courtesy of the San Jose News.

1956 Chevrolet owned by San Jose Rod and Wheelers member Frank Goehring of San Jose, California. Frank's Chevrolet appeared in a story about customized cars that was printed in the August 19, 1957 issue of the San Jose News. By then the car was so radically lowered that he couldn't fit a package of cigarettes under the car. According to the story it sat about three and a half inches from the ground. The car's front coil springs were cut and the rear springs were blocked in order to drop the car. Side pipes made the car even lower.[1]

Please get in touch with us at mail@kustomrama.com if you have additional information or photos to share about Frank Goehring's 1956 Chevrolet.