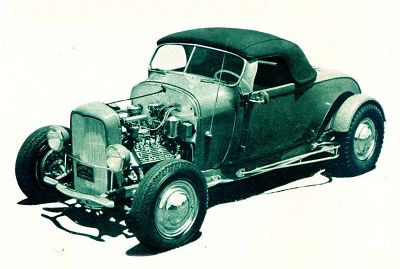 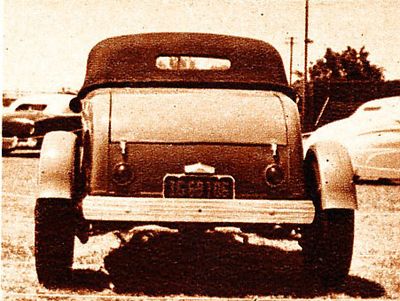 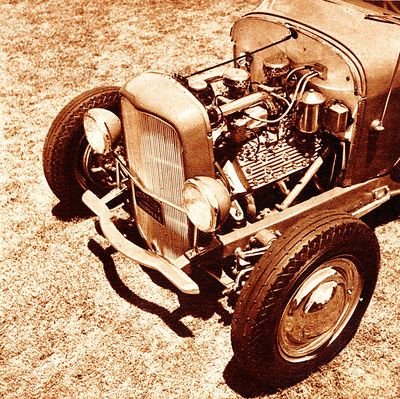 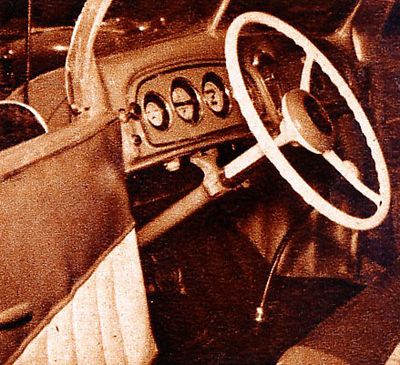 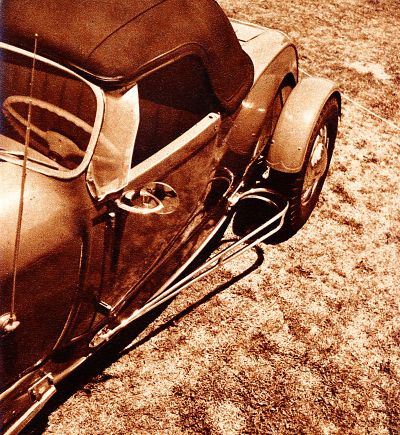 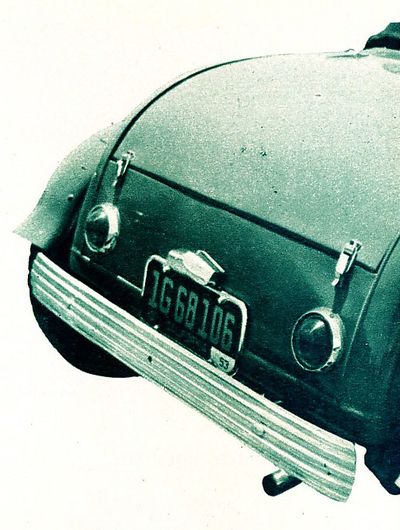 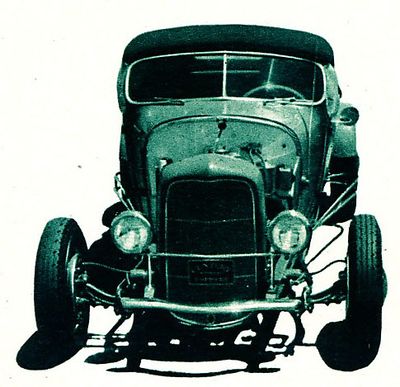 1929 Ford Model A roadster owned by Modesto Century Toppers member Eugene Pereira of Tracy, California. Eugene began building his hot rod in the mid 1940s, but he got distracted and the roadster got put on hold. In 1949, he towed the car homeward and began dismantling the car, practically starting the project all over again. A year of constructing and building later, the car was finished. He threw out the 4 banger in 1947, and replaced it with a fresh 59A V8 block. Almost rest of the Model A running gear was thrown away as well, exchanging it with components from a dismantled 1932 Ford. He took the radiator and grille shell from the very same 1932 Ford as well, filling the water inlet hole and Ford medallion. The cowl gas tank was removed and repositioned together with the battery in the trunk. This modification allowed him to install a dash panel from a 1930 Buick, complete with the original instruments. He did not find any Ford steering wheel that he liked, so he got hold of a Dodge wheel. A chopped 1937 Ford windshield was installed, giving it a distinct look. Because Northern California is periodically, Eugene had the upholstery shop install a black padded top. The rear bumper was a shortened 1937 DeSoto front bumper. A set of Pontiac taillights were installed in the rear pan, giving it a clean look. Nerf bars were installed on both sides, protecting the rear tires.[1]

The front suspension from a 1939 Ford was installed, providing hydraulic brakes, which also was installed in the rear. With the body and chassis in place, Eugene began modifying the engine. First the block was ported and relieved. Next was to bore it, enlarging the cylinders slightly, then a set of Kogel heads were installed. A Weiand manifold was purchased, along with a pair of Stromberg 97 carburetors. A set of headers were mounted, along with a set of twin mufflers. Eugene also had a set of lakes plugs for dragging. 26 tooth Lincoln gear was installed, and the ratio of the rear end was 3.78. Up front he had 5.50-16 tires, and in the rear he had 6.50-16 units. The car turned 119mph on the local drag strip.[1]

The interior was done in brown and white leatherette. Once the car was done, it was painted Bittersweet.[1]

Please get in touch with us at mail@kustomrama.com if you have additional information or photos to share about Eugene Pereira's 1929 Ford.