An early iteration of Eric's Chevrolet as it appeared in Trend Book 143 Restyle Your Car. 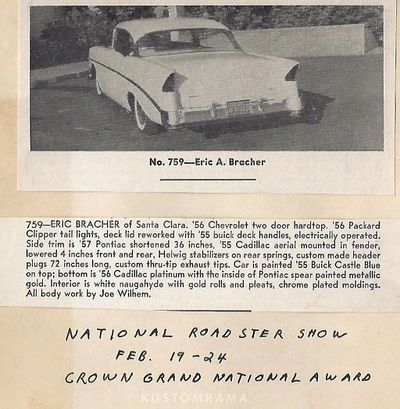 Another early iteration of the car as it was presented in the Souvenir Catalog for the 1957 National Roadster Show. Photo courtesy of Chris Bracher. 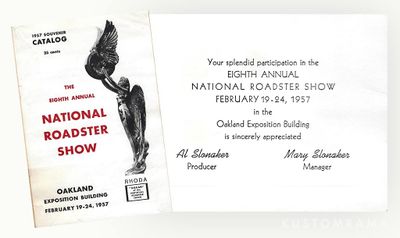 A greeting from Al and Mary Slonaker that Eric received at the 1957 National Roadster Show.

Eric made the news when he entered the Chevrolet in the 1957 National Roadster Show. Three cars built by Wilhelm won awards at the show. Eric's Chevrolet won top honors for offering the most to the automotive design field. The other winners were Jim Gregg's 1953 Chevrolet and John Major's 1954 Ford. 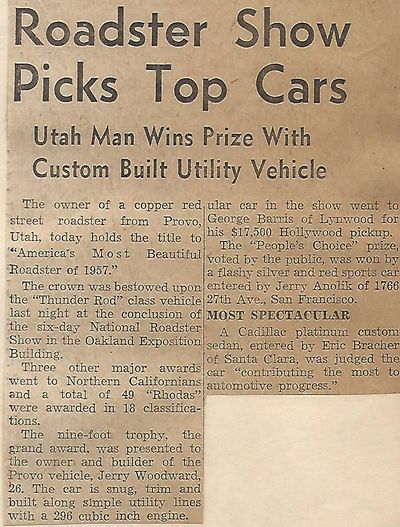 Another newspaper clipping about the 1957 National Roadster Show that mentions Eric's Chevrolet.

Eric's Chevrolet as it looked when it was featured in the "Side Trim Mania" section of Custom Cars September 1957. 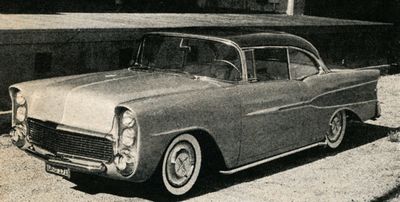 Eric's Chevy as it appeared when it was featured in Motor Life July 1958. This iteration featured a heavily reworked front end. 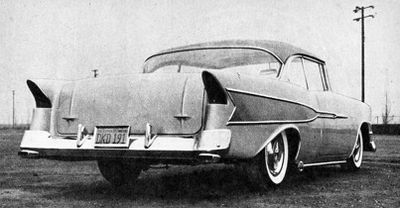 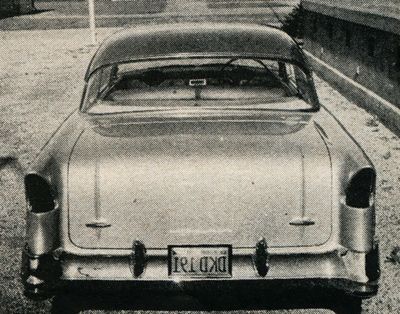 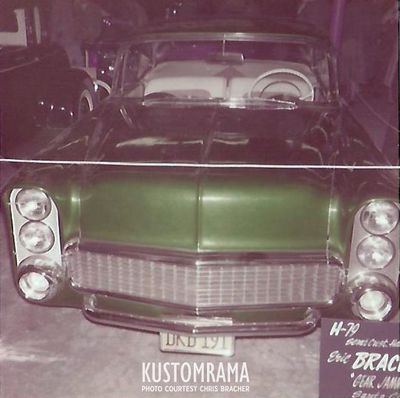 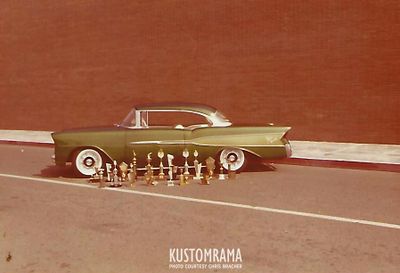 The Green Hornet iteration of the car as it appeared in Custom Cars August 1960. Photo courtesy of Chris Bracher. 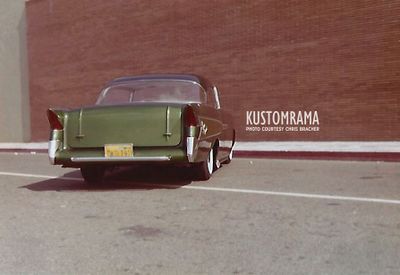 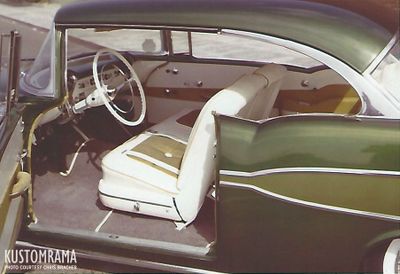 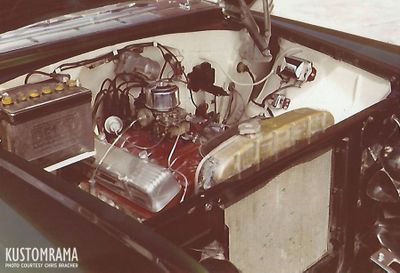 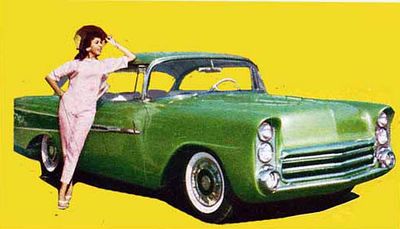 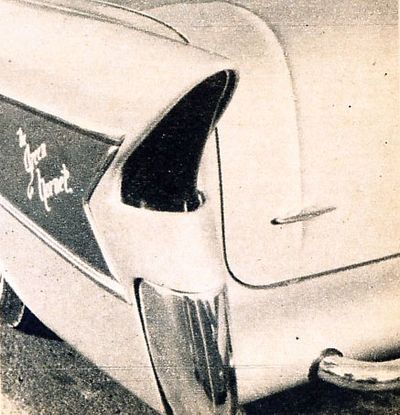 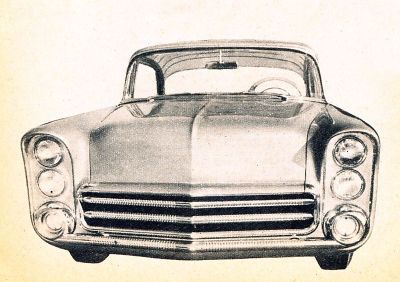 Eric's Chevrolet was restyled by Joe Wilhelm of Wilhelm's Custom Shop. An early iteration of the car, painted in white lacquer, appeared in Trend Book 143 Restyle Your Car. This version featured shaved door handles, simplified side trim, and a black and white interior complete with a white Naugahyde tonneau cover.[1] Later on Joe grafted on 1956 Packard Clipper taillights and reworked the deck lid with two peaks and 1955 Buick deck handles. The deck lid was also electronically operated. This version can be seen in the Souvenir Catalog for the 1957 National Roadster Show.

Honored at the 1957 National Roadster Show

In February of 1957 Eric's Chevrolet was shown at the National Roadster Show. This iteration featured two reversed 1957 Pontiac side trim pieces that were shortened 36 inches and spliced together for a spear-like effect. 1955 Cadillac aerials were mounted in the fender, and the hood was peaked. This iteration of the car was painted 1955 Buick Castle Blue on top. The bottom was 1956 Cadillac platinum, and the inside of the Pontiac spears was painted metallic gold. The interior was Naugahyde white with gold rolls and pleats and chrome plated moldings. The car was lowered 4 inches front and rear for a proper stance. The coils were cut on the front, and blocks installed on the rear to lower the car. Helwig stabilizers were installed on the rear springs. It was dressed up with 72 inches long custom made header plugs and custom thru-tip exhaust tips. At the show, Eric won the O'Hara Trophies Grand Award for having "The Car Contributing Most to Automotive Progress." According to the Souvenir Catalog from the show, this award was handed out to the car displaying the best new ideas for the improvement of the automobile, regardless of division.[2]

In September of 1957 Eric's Chevrolet appeared in Custom Cars September 1957 in a section called "Side Trim Mania". The car was chosen for its excellent design in relationship to the overall appearance it had due to the two reversed 1957 Pontiac trim pieces that were spliced together for a spear-like effect.

In 1958 Bob's Buick was nominated as one of 28 "Top Customs of the Year" in Motor Life July 1958.[3] This iteration featured quad headlights, reworked fenders, a rolled pan, and a custom grille.

By 1960 a grille and front bumper made by ribbed exhaust tubing had been installed on the car. The rear bumper also disappeared, instead the rear was modified to fit 1956 Chrysler bumper tips. A custom roll pan was made and welded on, with a protecting Nerf bar attached. It was painted Green and Lime lacquer, hence the name "The Green Hornet". 1958 Lincoln wheel covers wrapped up the style.[4]

Please get in touch with us at mail@kustomrama.com if you have additional information or photos to share about Eric Bracher's 1956 Chevrolet.