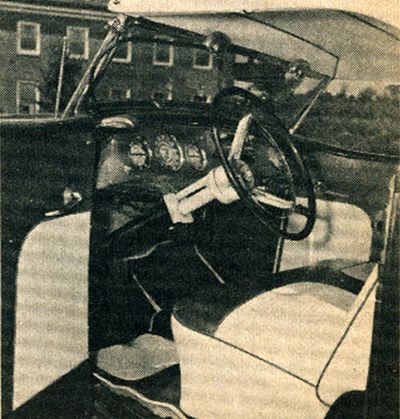 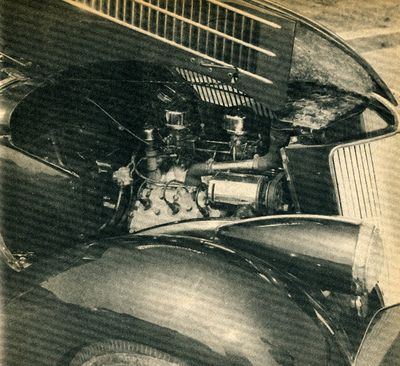 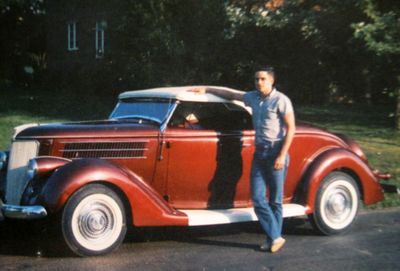 Dickie Burke with the roadster after he bought it in 1962. Photo provided by Dickie Burke. 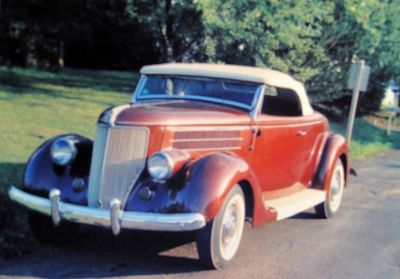 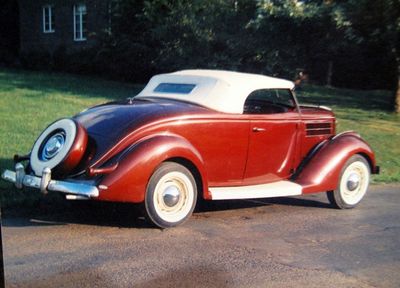 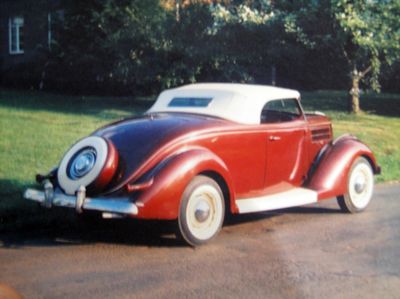 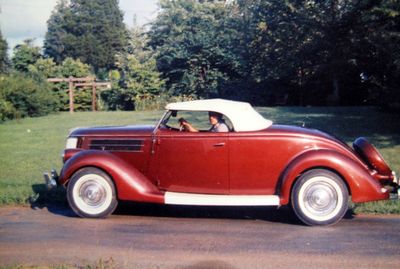 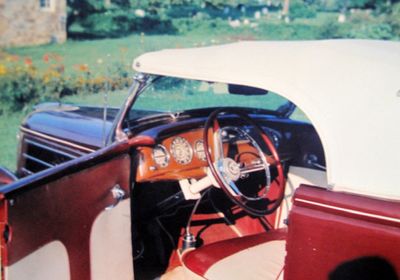 1936 Ford Roadster owned and restyled by Ed Dell. The cleaned up roadster was mostly kept stock, but Ed paid a lot of attention to details such as the 1940 Packard headlights. The stock bumpers were exchanged with 1948 Ford units both aft and rear. The windshield was chopped and a white top was added. The interior was done in maroon and white Naugahyde, the dashboard was handmade and featured a set of 1941 Buick clusters, 1956 Ford steering wheel and a 1949 Oldsmobile radio. The rumble seat was upholstered to match the interior and the running boards were upholstered in white as well. Two gallons of red maroon lacquer were used to paint the car. Under the hood rested a warmed over 1948 Ford engine sporting Offenhauser manifold with dual carbs, a twelve pound Weber flywheel and an Auburn clutch.[1]

In 1962 Dickie Burke of Warrenton, Virginia bought Ed's roadster from someone in College Park, Maryland for $575.00. Dick can't remember who he bought the car from, but he believes it could have been Ed. When Dick got it, it still had the flathead engine and looked very much like it did in 1959. A pair of 6 inch lowering shackles were used in the rear to lower the car; Dick modified these in order to raise it little in the rear. Dick sold the car to Joe Michie of Newport News, Virginia for $675.00.[2] Joe sold it to Willie Glass, who later the same day sold it to his neighbor. Larry Robinson of Richmond, Virginia bought it in the 1970s. Larry sold it to Don Garlits. When Don bought it, the chopped top and stanchions were replaced by stock pieces.[3]

Please get in touch with us at mail@kustomrama.com if you have additional information or photos to share about Ed Dell's 1936 Ford.