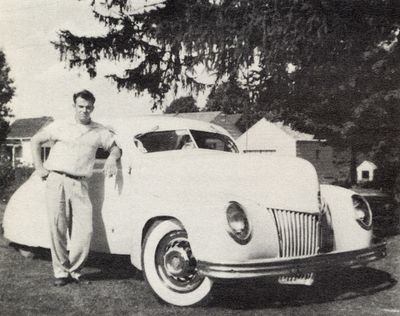 1939 Ford Coupe owned by Donald J. Hyland of Springfield, Massachusetts. Donald bought the car brand new, and drove it around for a while before he decided to have it customized. The coupe was then chopped, channeled, and dechromed. The fenders were molded, and fit with fender skirts in the rear. The stock bumpers were replaced by ripple-style bumpers. Donald kept the chassis stock, but swapped the stock engine for an 125 hp Mercury V8. Inside the car featured a black and yellow interior, topped off with a fully chromed dash. The restyled version of the car made its debut at the fifth annual Hartford Autorama in 1955. That version of the car was painted sungate ivory, and promoted as a one-owner car valued at about $700.[1]

Please get in touch with us at mail@kustomrama.com if you have additional information or photos to share about Donald J. Hyland's 1939 Ford.