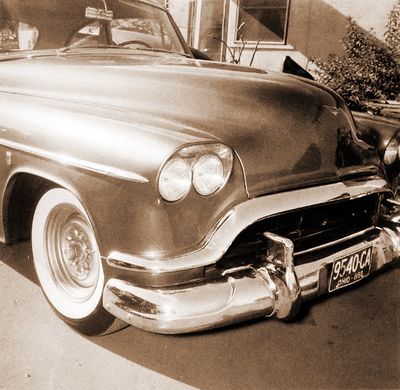 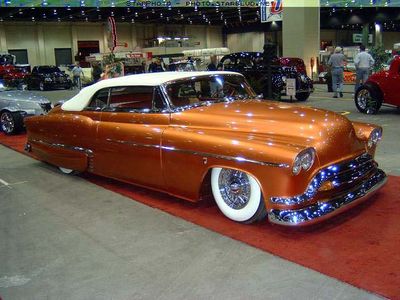 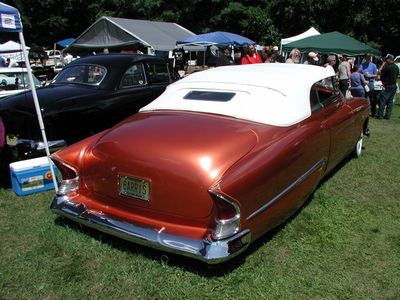 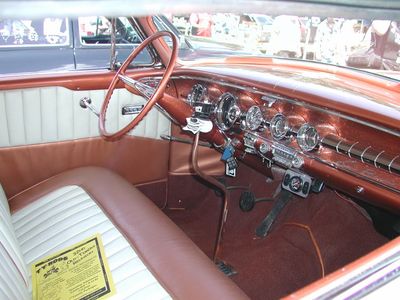 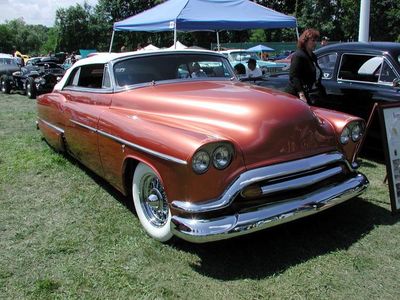 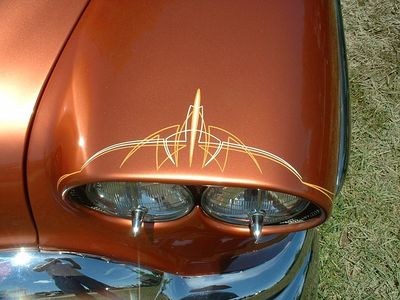 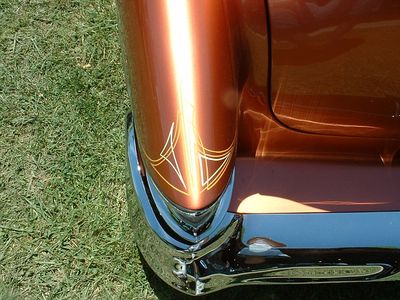 1951 Oldsmobile 88 Convertible restyled by Barris Kustoms in late 1958 for Don Hurley of Ohio. The body was nosed, decked and shaved for handles. The upper trim on the rear fenders were removed and the holes were filled to give it a cleaner appearance. Air scoops were made in the bottom edges of the rear fenders in front of the handmade cruiser skirts which were added. The windshield was chopped 4 inches and a white top was added. The bumpers were shaved for bumper and license guards. The car featured a handmade grille bar with flushed parking lights. The original side trims were swapped for a pair of 1957 Cadillac units. Quad headlights were installed and fitted with Lucas units. The license plate was recessed in the deck lid. Inside, a 1958 Pontiac dashboard was installed along with a 1958 Oldsmobile steering wheel. The rear fenders were modified to accept the 1956 Packard taillights.[2]

The Kopper Dust never gained any fame, proving that not all Barris Kustoms were famous. The car only appeared twice in the magazines, in the how-to-do stories based upon the quad headlights. However the Ohio-based custom was otherwise anonymous. Creations finished about at the same time like the Aztec and the Ala Kart gained much more fame.[2]

Don sold the car to Fred Glidden who used the car to drag racing. After this the car disappeared. A fried of Bob Wescott found the car abandoned in the deep woods of South Carolina in the 1980's. Bob contacted Kurt McCormick in the 1980's when he wanted to sell the car to someone who would restore it back to its former glory. The Olds was too rough for Kurt and he gave Pat Orsillo's name to Bob. Pat welcomed the call right away and bought the car. "Within moments I gathered the family together and said, 'How about a trip to Graceland!'" Pat says. "Two days later we were all in an alley where the car was being stored. Eyeballing the car, I knew exactly why it had found me-it was completely gone! The only items that were still in nice shape were the original Barris crests. How they survived, I'll never know." Pat was able to track down some of the cars former history. It reportedly ran moonshine in its earlier years, which accounts for the 1957 Oldsmobile J-2 engine, six two-barrel carburetors (now only three), four-speed transmission, 4.11:1 gears, and traction bars.[2]

Restoring the ragtop was a "love/hate" affair, Pat says. He loved handing off the extensive sheetmetal work to Russo's Auto Body in Middletown, New York; paying for it was a "hate" thing! The rusted body panels were replaced by Olds' body panels, then re-customized. Classic Auto Upholstery upholstered the interior in a two-tone paint scheme consisting of copper and white leatherette. Once the bodywork was done, it was painted PPG Copper Pearl.[2] Salvagerz member Anthony White pinstriped the fenders and dashboard.[3] There is a few deviations from the custom's original form, namely the Kelsey-Hayes wire wheels and air springs from Air Ride Technologies. Otherwise, the car remains faithful to its beginnings. "My favorite thing about the car is that it is a Barris custom," Pat says, "and I brought it back to its original glory." Amen to that, our custom brother![2]

Please get in touch with us at mail@kustomrama.com if you have additional information or photos to share about Don Hurley's 1951 Oldsmobile.