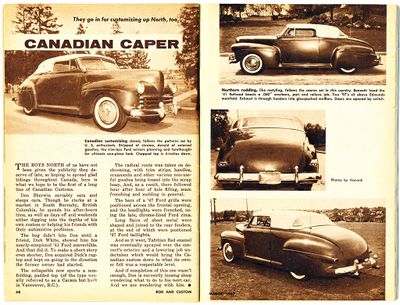 Dick's Ford was featured in Rod & Custom March 1957 as the "Canadian Caper." 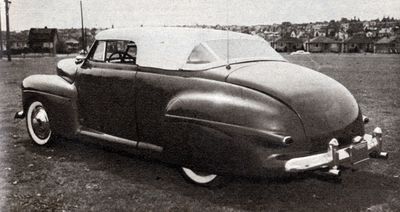 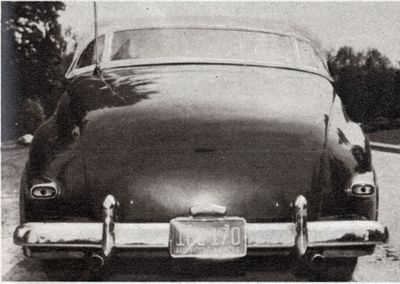 1941 Ford owned by Dick White of South Burnaby, British Columbia, Canada. Before completing the build, Dick sold the Ford to fellow enthusiast Don Sherwin, also from South Burnaby. A white padded top was fabricated for the car in Vancouver and the windshield was chopped by four inches. The car was nosed, decked, shaved of its handles and fully operated by push-buttons. The side moldings were removed for a cleaner appearance. The gas filler door, rear gravel pan and fenders were molded-in. The running boards were rounded similar to Jesse Lopez' 1941 Ford and the headlights were frenched using headlight rims from a 1952-1954 Ford. The antenna was moved from the firewall to a location behind the top. The grille was modified by adding vertical grille bars from a 1947 Ford. Long flares of sheet metal were shaped and joined to the rear fenders which were fit with 1947 Ford taillights. The car was lowered to a respectable level. Once completed, it was painted Tahitian Red and equipped with dual spotlights and fender skirts. The engine featured a .060" overbore and it was both ported and relieved. The fuel went through two Stromberg 97s mounted on an Edmunds Manifold. Glass pack mufflers were also installed on the car.[1]

Dick's Ford was featured in Rod & Custom March 1957 as the "Canadian Caper."

Please get in touch with us at mail@kustomrama.com if you have additional information or photos to share about Dick White's 1941 Ford.