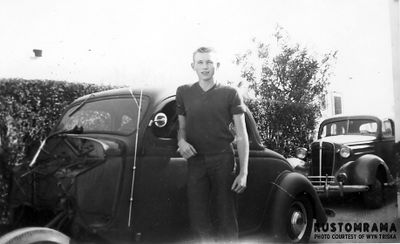 An early photo of Del with the coupe, taken before the top was chopped. Del bought the car in 1948 or 1949, soon after he graduated high school. Photo courtesy of Wyn Triska, provided by Micke Hedberg. 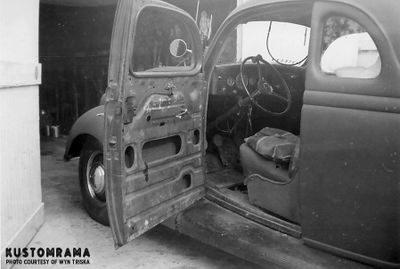 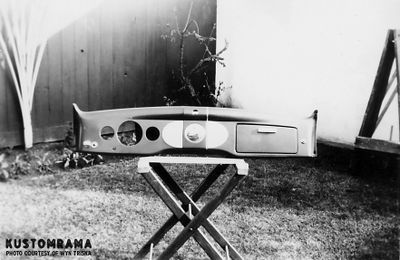 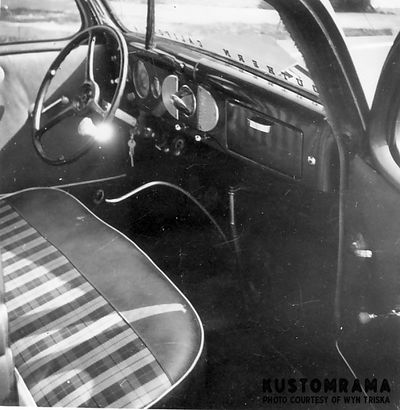 The dash, new seat covers and door panels installed. Notice the “Southern California” sticker in the bottom of the windshield. Photo courtesy of Wyn Triska, provided by Micke Hedberg. 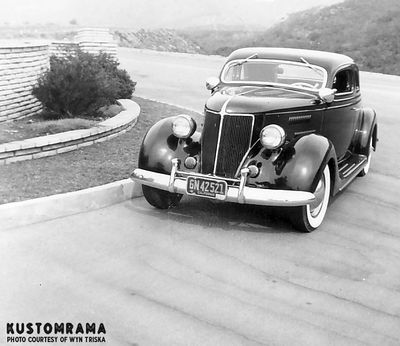 Rancho Palos Verde, California 1953. Del’s coupe as it sat after the top had been chopped and the fenders and headlights had been molded to the body. According to Del’s son, Wyn, the car was restyled late in the 1940s or early in the 1950s. “Dad was in the United States Navy while working on it. He was stationed in San Diego, California.” Del had the top professionally chopped by a friend. As Del was in the Navy at the time, he did not have a lot of money, so he worked with the friend who did the chop and bodywork. The work was done at his shop, and Del traded labor for getting it done. Photo courtesy of Wyn Triska, provided by Micke Hedberg. 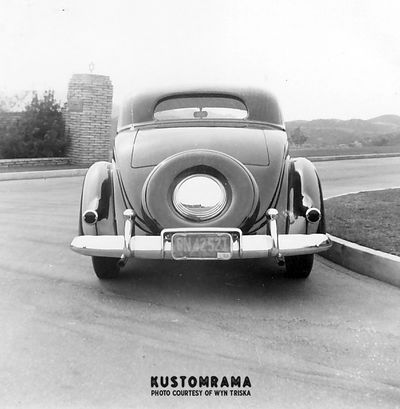 A rear end shot of the coupe. Del didn’t want to reduce the height of the rear window during the chop, so it was chopped lower in the back to accommodate the full-sized rear window. Photo courtesy of Wyn Triska, provided by Micke Hedberg. 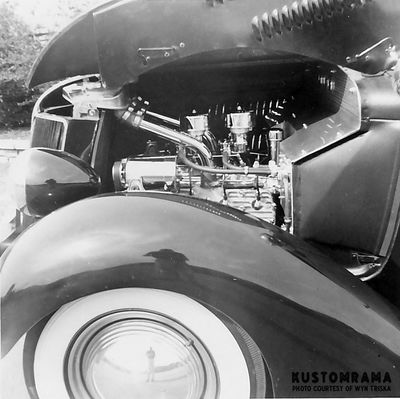 The hood was louvered, and the original engine was replaced with a 1937 Ford engine that Del hopped up by installing an Edmunds intake manifold, twin Stromberg 97 carburetors, a Weber ¾ race camshaft, high compression Cyclone heads, hi-volume oil pump and a distributor adapted from a late 1940s Ford engine. The engine compartment was also dressed up with lots of chrome and machine-polished aluminum-covered firewall. Photo courtesy of Wyn Triska, provided by Micke Hedberg. 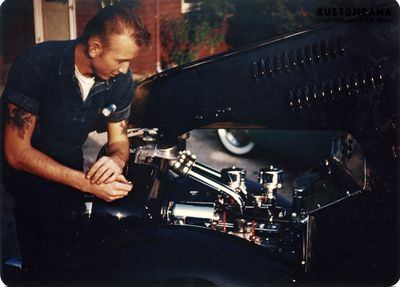 A photo of Wyn with the coupe taken in 1954. Photo courtesy of Wyn Triska, provided by Micke Hedberg. 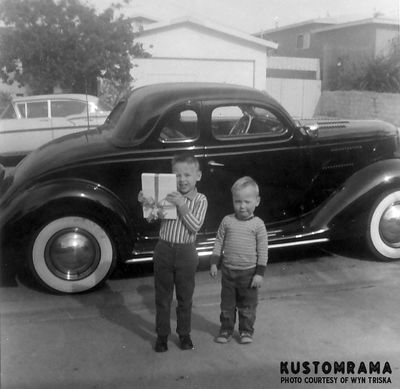 A photo of the coupe taken in 1964. The kids next to the car are Del’s two sons, Wyn and Brian. Photo courtesy of Wyn Triska, provided by Micke Hedberg. 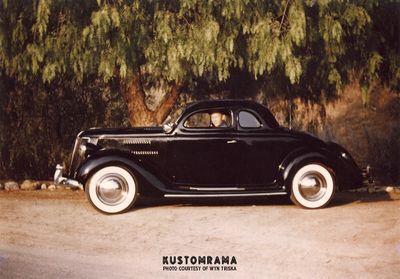 A color photo of Del with the coupe. Photo courtesy of Wyn Triska, provided by Micke Hedberg. 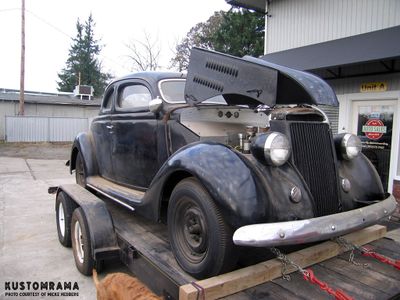 Del’s old coupe as it sat when Micke Hedberg bought it in November of 2015. When Micke bought the old custom it had been in storage since 1980. Photo courtesy of Micke Hedberg. 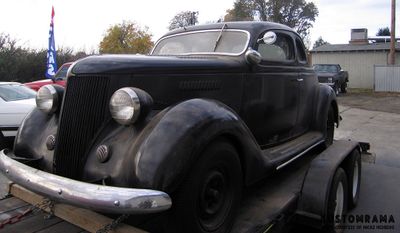 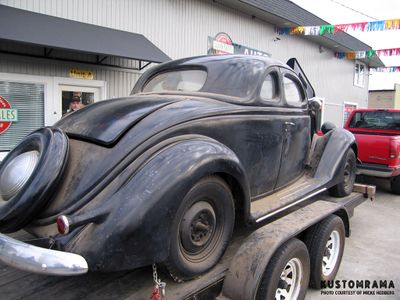 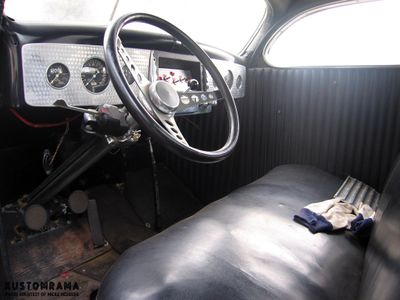 When Wynn got the car from his dad in 1972 the old steering wheel had deteriorated, so Wyn installed a Grant steering wheel. Del had also installed a Motorola dash radio and installed switches for lights behind the speakergrill. The switches had also deteriorated, so Wyn replaced them with new ones. Under Del's supervision, Wyn retooled the aluminum dash exactly as Del had first tooled it, as it had become worn over the years. Photo courtesy of Micke Hedberg. 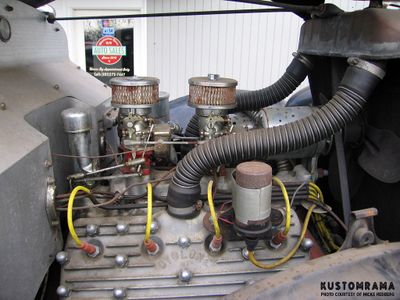 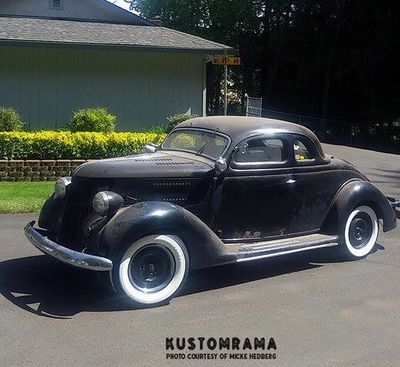 Del's old coupe as it sat in April of 2016, after Micke had installed new whitewall tires. Photo courtesy of Micke Hedberg. 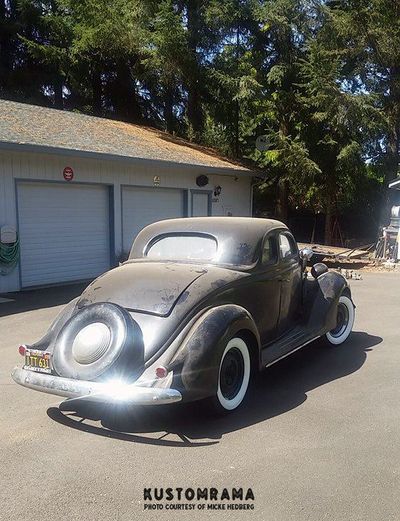 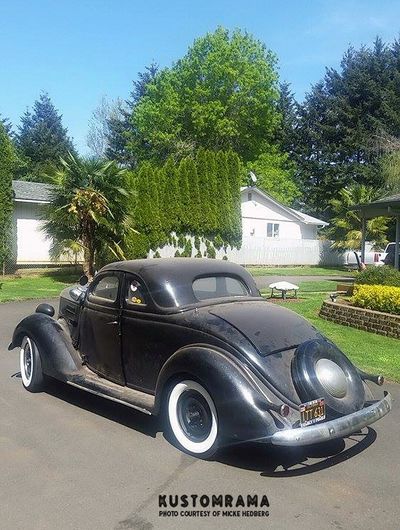 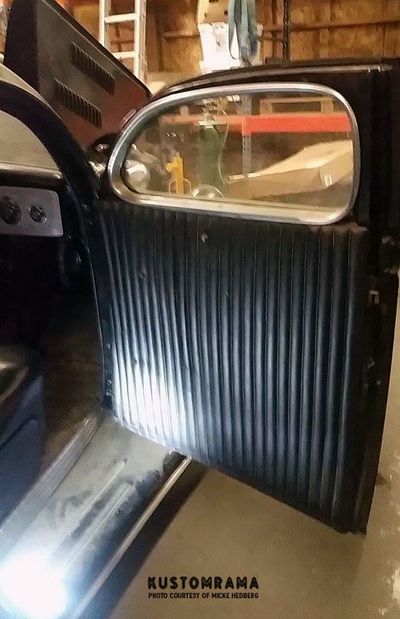 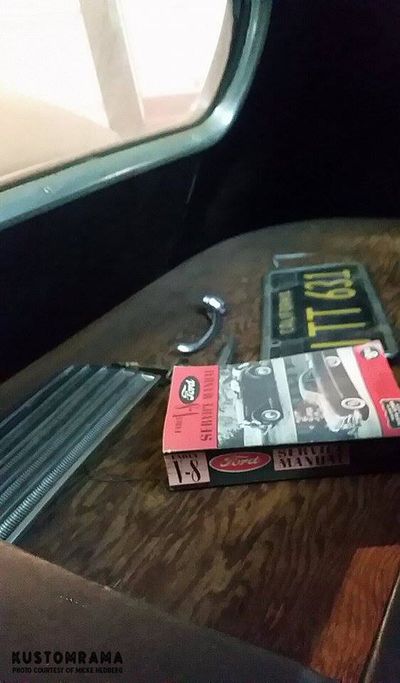 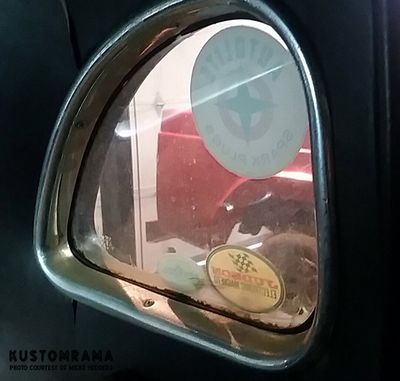 1936 Ford 5-Window coupe owned by Delwyn “Del” Triska of Kagel Canyon, California. In 2016, Del’s widow, Nancy, told later owner Micke Hedberg that her husband had bought the car in 1948 or 1949, soon after he had graduated high school. According to Del’s oldest son, Wyn, the car was restyled late in the 1940s, or early in the 1950s, when Del lived in Kagel Canyon, near Los Angeles: “Dad was in the United States Navy while working on the car. He was stationed in San Diego, California. His ship would make port at San Diego, Long Beach and San Francisco."[1]

Del had the top professionally chopped by a friend. As Del was in the Navy at the time, he didn’t have a lot of money to spend on the car, so he worked with the friend who did the chop and bodywork. The work was done at the friend's shop in Long Beach, and Del traded labor for getting it done.[1]

Wyn told Micke that he remembered his dad telling him that the guy that performed the chop was pretty well known, and was "the top hot rod man in Long Beach." He couldn’t remember the body man's name, but he had built cars that were featured in magazines. “Dad’s car was the first 5-window coupe the guy had done. He had done 3-window coupes. It’s chopped lower in the back to accommodate the full-sized rear window, because Dad didn’t want the small window. Not a straight-line chop. 5-windows made it difficult.”[1]

During the chop, a section from a 1939 Pontiac roof skin was used to fill in the roof. The fenders, running boards, headlights and taillights were molded in before the car received a glossy black paint job. Del’s friend used only lead to cover the welds and smooth things out before paint. Custom accessories included dual Appleton spotlights, custom hubcaps, whitewall tires, and what seem to be 1948 Chevrolet bumpers and 1949 Chevrolet accessory bumper guards and license plate frames.[1]

The car was made for show and go, and under the louvered hood rested a race-ready 1937 Ford engine. The engine ran an Edmunds intake manifold, twin Stromberg 97 carburetors, a Weber ¾ race camshaft, high compression Cyclone heads, hi-volume oil pump and a distributor adapted from a late 1940s Ford engine. Del designed and fabricated the exhaust headers himself. Hydraulic brakes from a 1940s Ford were installed, along with a late 1940s transmission and columnshift.[1]

Del modified the dash and installed 1940s Stewart Warner gauges and an Ford accessory Motorola dash radio. He also added pieces of machine-polished aluminum to the dashboard before the seat and door panels were upholstered in black. Del did all of the work on the coupe himself, except for the body work and upholstery. According to Wyn, Del never raced the car. Nancy also claims he was too protective of his car to race it.[1]

Del and his brother-in-law-to-be, Lew, drove the car from San Diego to Los Angeles many times when they were in the Navy. Wyn said Del used to tell his two sons about one time when he was driving with Lew; “They stopped at a stop sign. The hood was off the ‘36, with the chrome carburetors looking good. A guy in a hot rod pulled up. He wanted to drag race right there, and said something insulting. Dad looked past him and saw a cop waiting, hidden, to give out tickets. The obnoxious guy was looking Dad’s car over, and he didn’t see the cop. So Dad revved his engine loudly as if he was going to race, but when the light changed, he rolled through the intersection slowly. The cop took off and ticketed the other fellow. Fakeout!”[1]

In 1972 Del gave the car to Wyn. Wyn was 13 years old at the time, and his father helped him rebuild the engine, fix up the body, and repaint it. Del and Wyn worked on the old custom for several years. Del and Wyn sandblasted the car to get rid of rust and old paint. They then used Bondo to smooth everything out. According to Nancy, “Del was a meticulous person and fussy about doing things correctly.”[1]

The exhaust headers Del had made for the car were rusted out, so these were replaced during the restoration. The car was also rewired, and it received a salvaged scrap Boeing 747 wiring harness that they found at a Rose Bowl swap meet. According to Wyn it was “cheap and high quality with high temp insulation.” The old steering wheel had deteriorated, so Wyn installed a new one. When Wyn was old enough to drive, he drove the old custom to work for about a year.[1]

In 1980, Wyn left home, and he gave the Ford back to his father. Del kept it in storage in his home in Torrance for the next 16 years. In 1996, he moved to Estacada, Oregon, to live close to his son. He brought the car along and stored it inside a pole barn. The car ran at the time, and Del drove it on and off the delivery truck. In 2003, the car was moved to Del’s 3-sided car port. The car port was open in the front, so Del always had a car cover on it. Del hung on to his old custom until he passed away in 2013.[1]

After Del passed away, the car swapped hands, and in 2015 it was advertised for sale. Dusters car club member Micke Hedberg of Borlänge, Sweden came across the ad, and decided to buy it in November. He had been searching for a coupe for a while when he came across the listing. The Ford had spent the last 35 years in storage when he bought it, and it was in need of a little work. When Micke bought the car, it came with a title in Del’s name from 1958. Nancy believes that Del’s father had the car in his name until 1958, when it was transferred to Del.[1]

Do You Know This Car?

Micke is still searching for more information from the years when Del built the coupe. Who was the known bodyman, and when was the car finished? He is going to have the coupe at the LA Roadster Show in 2016 to see if someone recognizes the car and can hel fill out the missing parts of its history. If you have more information about Del’s old custom to share, please get in touch with Kustomrama at mail@kustomrama.com.

Please get in touch with us at mail@kustomrama.com if you have additional information or photos to share about Delwyn Triska’s 1936 Ford.