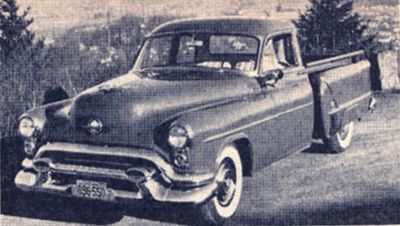 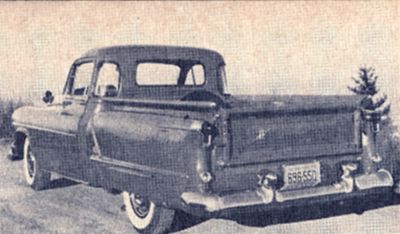 1953 Oldsmobile 88 Sedan built by Dee Wescott. After a few months on the road, the brand new Oldsmobile got flipped over at the highway in an accident. The car was wrecked, and it swapped hands. The new owner was none other then Dee Wescott, a body and fender man, and part owner of Jack's Service in Damascus, Oregon. As the shop needed a shop truck, Dee had been looking for just such a model. The plan was to make the car look like as nearly as possible like a factory product. The stock front fenders, grille, hood, windshield, and doors were used. The top half of a 1953 GMC cab was molded into the Oldsmobile windshield and door frames. The rear window openings were cut 1 1/4 inches to conform with the door glass openings. The rear glass was also cut down to fit the smaller frame, and the corner openings were filled with 14-inch Plexiglass formed to fit. The lower half of the cab was widened six inches to conform with the door contour and the gas filler access filled. The bed was made from the bed of the same 1953 GMC. The sides of the bed was shorteed 3 inches. Rear fenders were Oldsmobile convertible quarter caps widened with sheet stock to form the pickup type fenders. The fenders were molded to the hand-formed panel under the tailgate. The tailgate was decorated with the Rocket insignia and chrome Oldsmobile letters. A fender cover from a 1937 Buick was used to store the spare tire on the bed. The chrome on the car was stock Oldsmobile chrome.

Once completed, the car was painted in 14 coats of Agate Red lacquer. Inside, seats and door panels were in black and white leatherette. Fiberglass insulated headliner was used along with white leather and black trim.

Please get in touch with us at mail@kustomrama.com if you have additional information or photos to share about Dee Wescott's 1953 Oldsmobile.