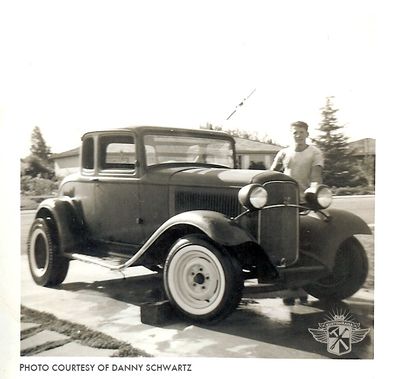 Danny's coupe as it appeared in 1959, after Bob Zumwait had done the bodywork and the car was ready for paint. Photo courtesy of Danny Schwartz. 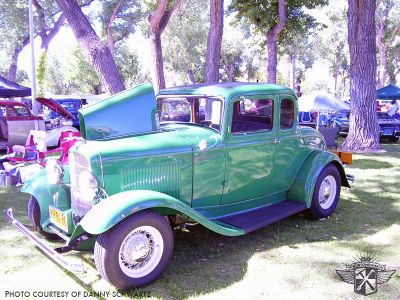 53 years after Danny sold his first 1932 Ford 5-Window Coupe, he bought another one that he completed. Photo courtesy of Danny Schwartz.

1932 Ford 5-Window Coupe owned by Danny Schwartz of Campbell, California. Danny's coupe was powered by an Oldsmobile motor that was hooked to a 1939 Ford transmission. The full race Olds motor was too much for the transmission, and Danny could not keep the transmission together. Danny had Bob Zumwait of Bob's Body Shop in Campbell do a lot of body work on the coupe. In 1959 the bodywork was completed, and the coupe was ready for paint. The car was never completed while Danny owned it, and in 1961 he sold it when he went off to college. 53 years later Danny bought another 1932 Ford that he completed. This coupe was powered by a milder 59AB flathead V-8 engine.[1]

Please get in touch with us at mail@kustomrama.com if you have additional information or photos to share about Danny Schwartz' 1932 Ford.