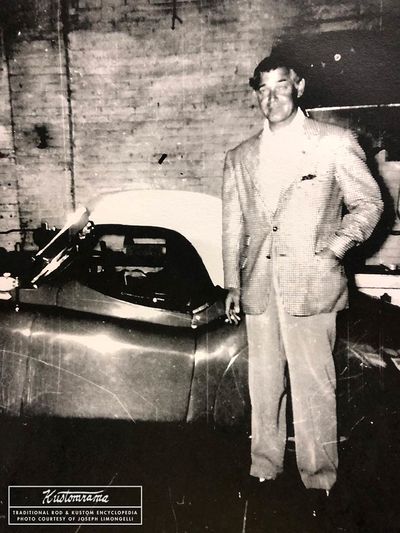 A photo of Clark Gable next to the Jaguar at Barris Kustoms. Clark dropped the car off at Barris late 1952. This photo was still on the wall at the Barris office when Joe Cantore Sr. restored the car. Photo courtesy of Joseph Limongelli. 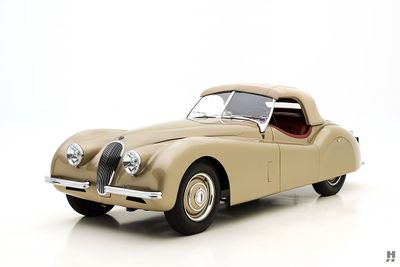 A photo of the Jaguar as it appeared when Hyman Ltd. advertised it for sale in 2017. Photo courtesy of Hyman Ltd. 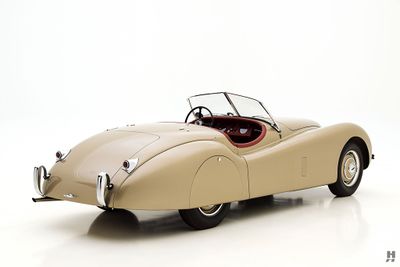 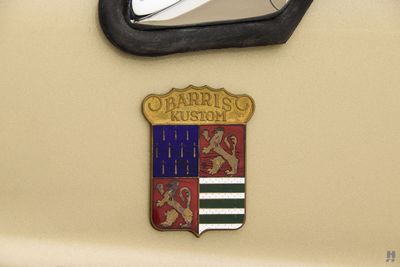 Barris Kustom badges were mounted on the cowl, below the windscreen posts. Photo courtesy of Hyman Ltd. 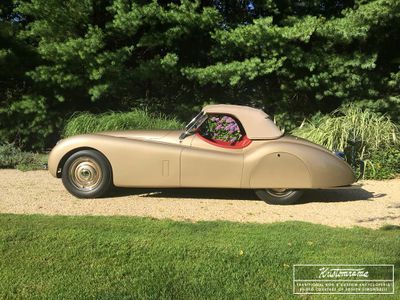 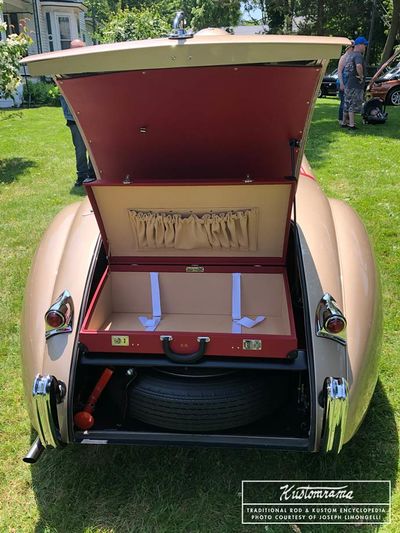 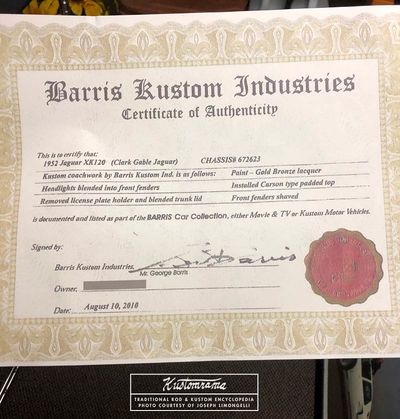 A Barris Kustom Industries Certificate of Authenticity for the car. George Barris also helped on the restoration of the car. Photo courtesy of Joseph Limongelli.

1952 Jaguar XK 120 restyled by Barris Kustoms for Clark Gable of Hollywood, California. When Jaguar unveiled their XK 120 in 1948, Gable was hooked, and he soon appeared in person at International Motors on Wilshire Boulevard in Hollywood to insist that he would be the recipient of the very first XK 120 delivered on the West Coast.[1] Gable owned at least three XK 120's, and he bought his first one from Hornburg in Los Angeles.[2] His second XK 120 was a gift by Tony Hulman of Indianapolus Motor Speedway fame.[1] Gable's third XK 120 was manufactured July 23, 1952. Painted Battleship Grey it was distributed by Hornburg in Los Angeles. It was delivered with a Red interior and a Gunmetal colores soft top.[3]

Late in 1952 Mr. Gable dropped the Jaguar off at Barris Kustoms for a mild makeover. At the shop, George Barris and his crew shaved the trim from the headlights. They also smoothed the front fenders by shaving off the marker lights. The wing mirrors were then removed before the holes were filled. The deck lid was shaved for its handle, and the license plate holder and light were removed. Barris Kustom badges were also mounted on the cowl, below the windscreen posts.[1]

After Barris had completed their work, the car received a padded top by Carson Top Shop. Because Gable was 6.2, the height of the top was raised 2 inches.[2]

Found in the Midwest

In 2010 the car was found in the Midwest. Joe Cantore Sr. bought it, and had Jim Kakuska of JK Restorations in Oswego, Illinois perform a Concours restoration. The restoration was completed in 2015. In 2017 it was shown at the Pebble Beach Concours d’Elegance. After the show, the car was sent to Hyman Ltd. where it was advertised for sale.[2]

Joseph Limongelli of Long Island, New York bought the car from Hyman Ltd. in 2017. In 2019 Limongelli told Sondre Kvipt of Kustomrama that Cantore had many Pebble Beach pre-war cars in his collection, but wanted something a little newer. The car came with personal letters and historic documents.[2]

Please get in touch with us at mail@kustomrama.com if you have additional information or photos to share about Clark Gable's 1952 Jaguar.