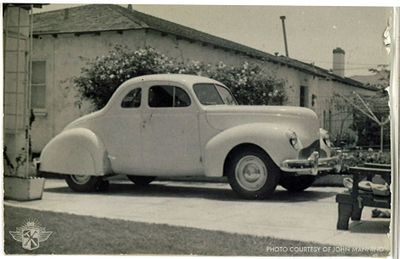 Chuck's coupe as it sat before the top was chopped. Photo courtesy of John Manning, provided by Joel Driskill of Chuck Manning Special Build Blog. 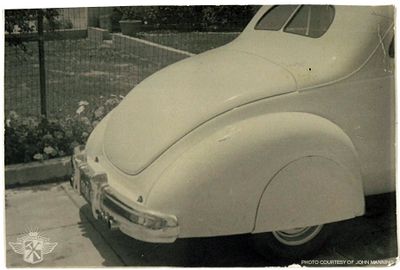 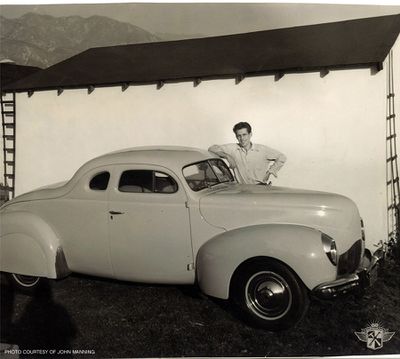 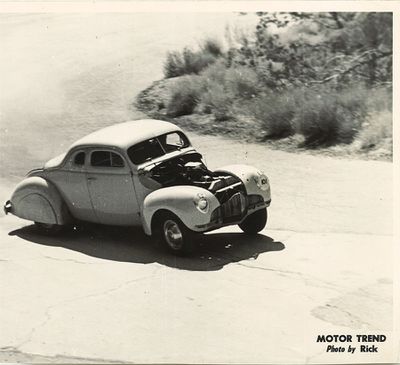 Chuck racing the coupe at the Sandburg Hill Climb in late 1951. Chuck has removed the hood and deck lid to reduce the weight. Photo courtesy of John Manning, provided by Joel Driskill of Chuck Manning Special Build Blog.

1939 Ford Coupe, owned, built and raced by Chuck Manning. Chuck, who was an aerospace engineer, customized the coupe before he went on to build the Chuck Manning Special in 1951. Chuck's coupe featured a chopped top, nosed hood, shaved side trim, removed running boards, custom grille, fenderskirts and Lyon aftermarket hubcaps. Later model, and bigger bumpers were installed up front and in the rear. Six exhaust pipes were routed through the rear bumper, and the stock taillights were removed, filled in and relocated down and inward towards the deck-lid. Chrome plated rock guards were mounted on the rear fenders to protect the fenders from dirt and gravel. Under the hood, Chuck's coupe featured a lot of the same tricks that that he used on the engine for the Chuck Manning Special race car later on. He made his own twin coil and fit them both with dual point distributors. The stock heads were also replaced by a pair of Eddie Meyer heads. As with the Chuck Manning Special, the coupe was also used for racing, and a photo of Chuck racing the car without a hood and deck lid at the Sandburg Hill Climb in late 1951 was printed in Motor Trend Magazine.[1]

Please get in touch with us at mail@kustomrama.com if you have additional information or photos to share about Chuck Manning's 1939 Ford.