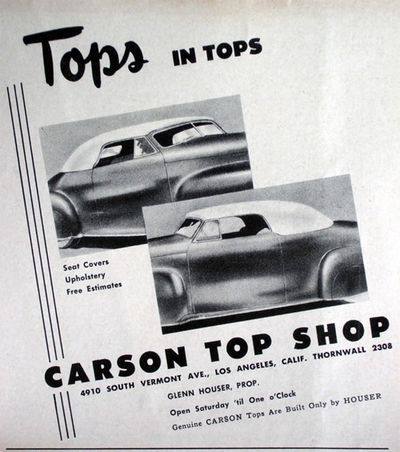 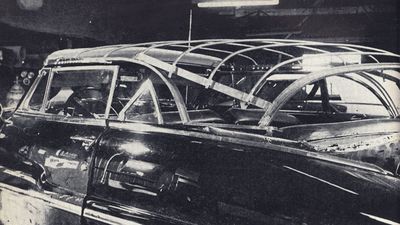 To give the Carson Top greater strength, steel braces are welded along the frame work

The essence of the Carson Top is a metal framework. The bows were usually welded to the convertible bow in the front. A layer of aviary wire, (smaller than chcicken wire) keeps the padding from sagging. The top is then covered with burlap, padding, and then outer canvas. The outside material is normally of a convertible top sports material. All buttons were covered with a flap and roll. The interior of the tops varied, most were coordinated with the car's upholstery. According to Motor Trend April 1953 you could by then get the tops in blue, green, tan, maroon, and white fabrics. The top could be made with a variety of different rear window designs. They could either be purchased with the standard open type window in either plastic or glass, or in the popular wrap-around Coupe de Ville design in heavy or light-weight plastic.

The price of a Carson Top depended on the style of windows, and the style of interior upholstery. In 1953, a top with the open style windows and a plain interior starts at $200 for any car over a 1942 with the exception of the foreign cars. American autos older than 1942 usually ran about $175. 1936 and 1937 coupes were smaller and cost only $155.

Click here for more details about how the Carson Tops were made. Rik Hoving has provided more then 250 photos from the restoration of the Ralph Jilek 1940 Ford

Please get in touch with us at mail@kustomrama.com if you have additional information or photos to share about Carson Top.