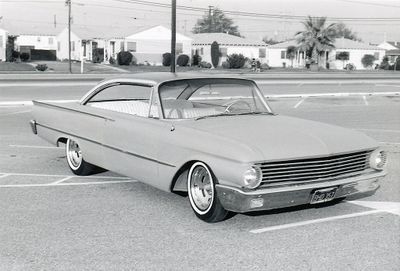 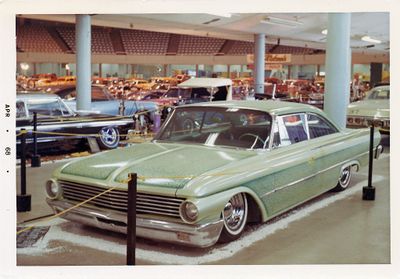 Carl's Starliner as it looked by April 1968. Photo courtesy of Howard Gribble.[1] 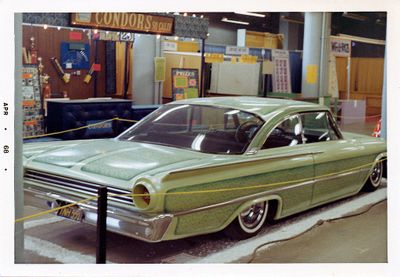 1961 Ford Starliner owned and restyled by Carl Darling of Torrance, California. In 1965 Carl restyled a 1961 Ford Starliner for his friend Howard Gribble. Carl and some friends were opening a custom body shop at the time and rented a one car garage, while still working their day jobs. Howard got the idea that he wanted to turn his Starliner into a boulevard cruiser and Carl and his friends were more than willing to have Howard as their first customer. And at little or no cost to Howard, at least for labor. Howard's Starliner made its debut at a car show in San Bernardino early in 1966. Not long after its debut, tragedy struck as Howard got hit by a pickup that ran a red light. The pickup smashed into the side of the metal flake Starliner. It probably could have been repaired but Howard didn't have the heart to start over again, so he sold the wrecked Ford to Carl for $200. Carl stripped it down and cut it up in pieces, keeping most of the custom features that weren't damaged. A couple of years later Carl acquired a 1961 Ford Starliner for himself. Using the custom pieces from Howard's car he built an exact copy of Howard's Starliner featuring two tube grilles, one up front and one between the tunneled taillights, single headlights set into the stock taillight housings, shortened fins, shaved door handles and shaved hood and deck. Carl painted the car a pearl green with lace on the sides and installed hydraulic lifts front and rear. It was entered in several car shows, including the Tridents Rod Custom Autorama at the Los Angeles Sports Arena. Howard can't remember what became of that car. Doing most of the work himself, Carl was forever building new cars to suit his tastes and moved on to other things, like his lifted Ford F100 pickup truck. Unfortunately Carl Darling died in 1976 but by that time he'd built many cool and innovative customs. Today Howard is very thankful for the work he did to make his Starliner the stylish custom that it was.[2]

Please get in touch with us at mail@kustomrama.com if you have additional information or photos to share about Carl Darling's 1961 Ford.