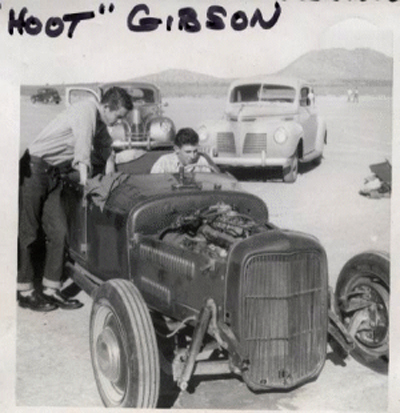 Chuck Hoot Gibson's roadster pickup at the dry lakes around 1948.[1] 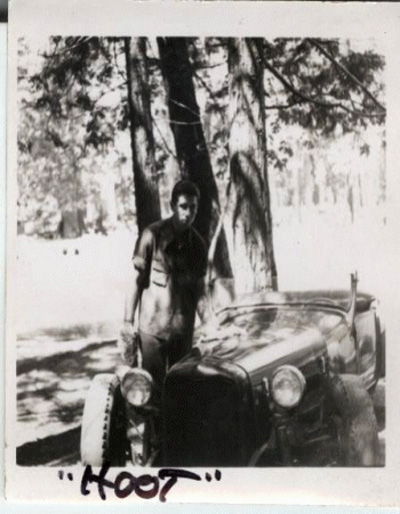 Hoot and his roadster pickup at a Prowlers picnic in 1949.[1] 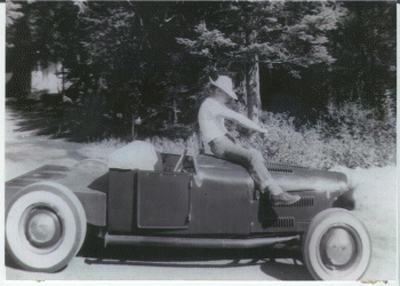 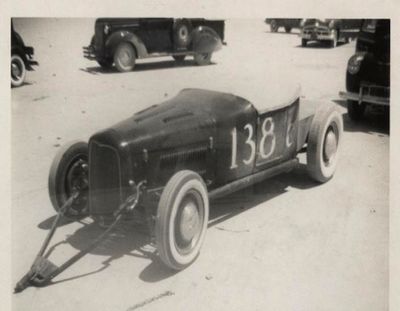 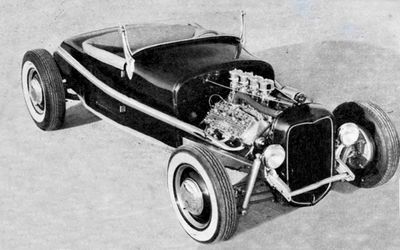 The roadster as it appeared when it was featured in Car Craft May 1956. Carl Burnett was the owner of the car by then. Photo by Bob Greene 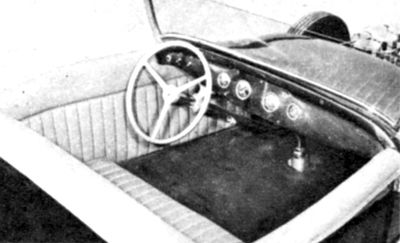 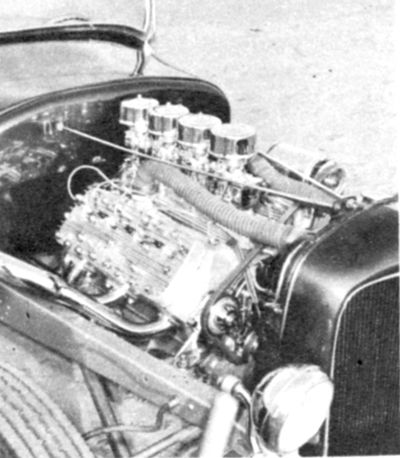 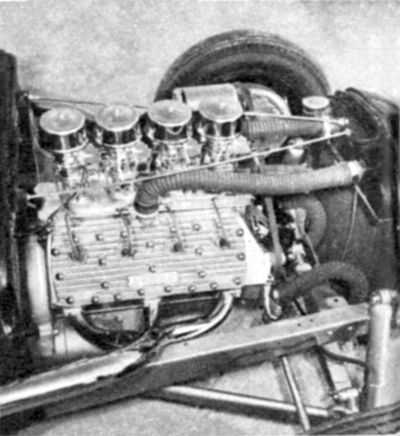 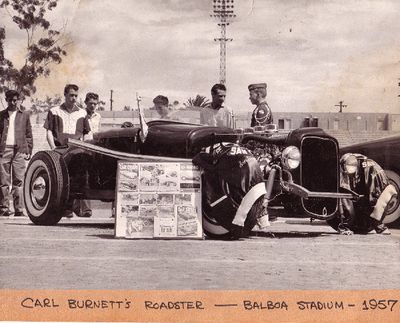 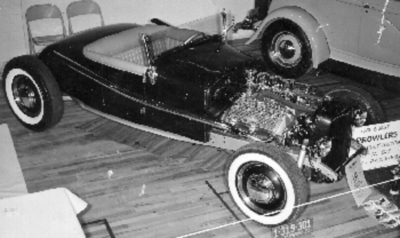 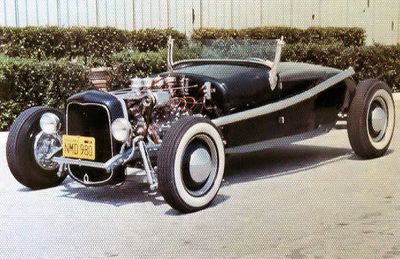 The roadster as it sat after Bob Smith had bought it from Carl.[1] 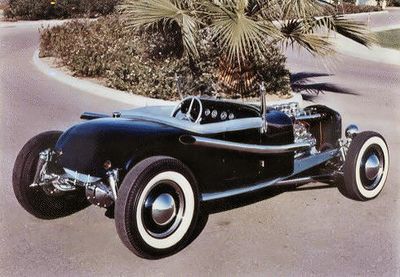 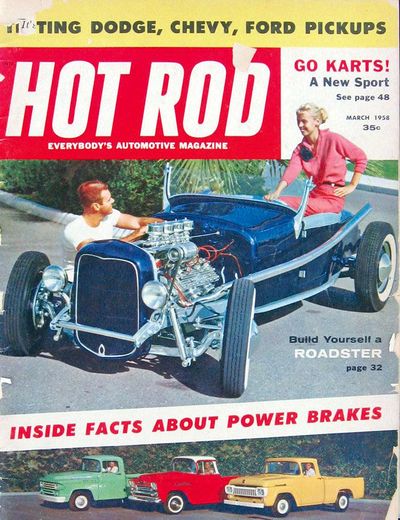 Bill's roadster on the cover of Hot Rod Magazine March 1958. 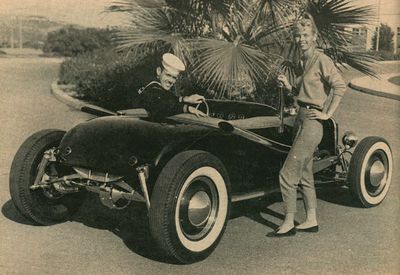 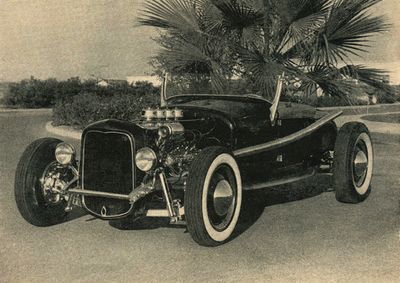 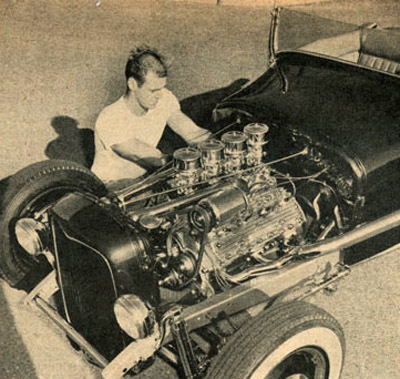 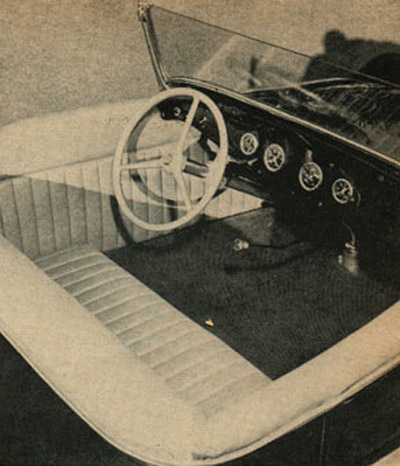 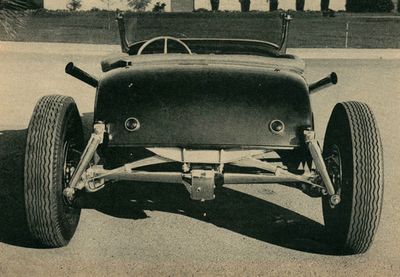 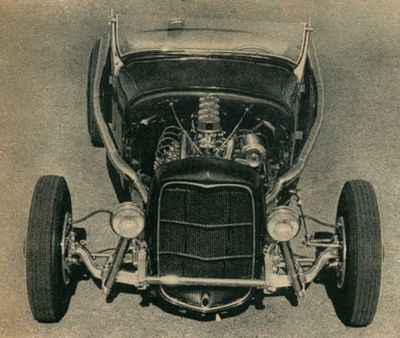 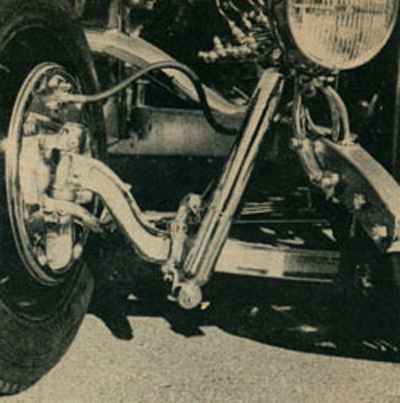 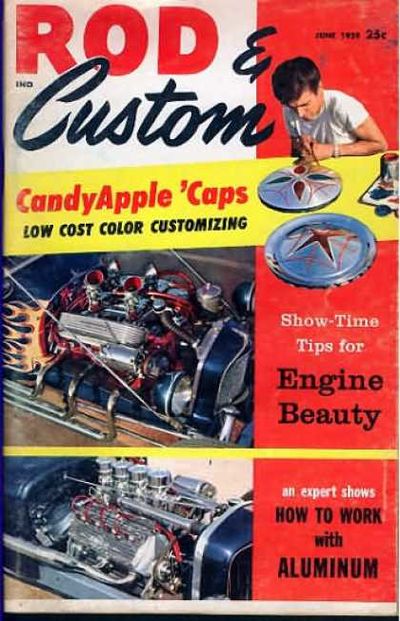 Bill's roadster at the cover of Rod & Custom June 1959 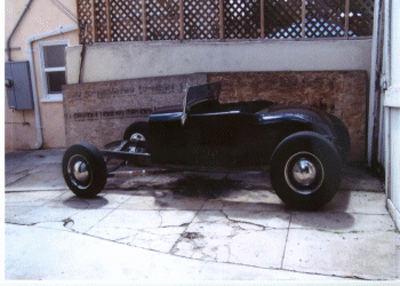 The roadster as it sat in 2008. When the photo was taken, Its current owner John LeBarre was working on restoring the car.[1] 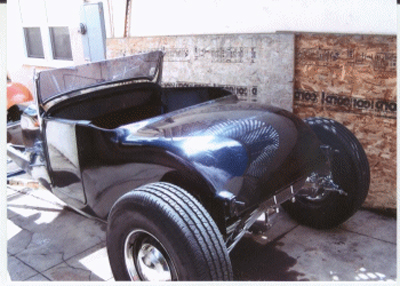 1927 Ford Model T Roadster Pickup originally owned and built by Chuck Gibson, a charter member of the San Diego Prowlers Car Club. Chuck Gibson, also known as "Hoot", was the first of 4 Prowlers members to own the roadster. Chuck owned the car in the 1940s and the early 1950s, and used it to race at the dry lakes.[1] When Chuck owned the car it consisted of a widened 1927 Ford Model T body that was channeled over a 1932 Ford chassis. The cowl was lengthened and the car was fit with a louvered 3-pieced-hood, and a 1932 Ford grille shell. Chuck sold the car to fellow Prowlers member Carl Burnett in the early 1950s.[2]

When Carl got the car he decided to convert it from a record chasing roadster pickup into a show winning roadster. He straightened the body and turned it into a roadster by grafting a trunk onto the car. A Henry J deck lid was used to create the new trunk. Austin Healey taillights were fit to the Henry J deck lid. The rear frame rails were stepped, raising the crossmember over a 1936 Ford suspension setup. Carl removed the hood in order to show off the hopped up 1948 Ford 256-cubic inch flathead V8 engine. The engine was hopped up featuring a Clay Smith three-quarter cam and an Evans competition manifold with four Stromberg 97s mounted on it. Evans heads and Jahns pistons boosted the compression up to 8 1/2 to 1. Carl routed the exhaust over the frame and around the body. According to Carl, the engine produced 175 hp at the flywheel. The engine was hooked to a 1939 Ford transmission and a 1936 Ford rear end with 3.78 gears. Keyser of San Diego was responsible for the tuck & roll interior. With the doors shut, the upholstery pattern carried the pleated leather panels forward in an unbroken sweep. The body was painted blue once completed.[2]

Carl traded away his roadster for a 1940 Ford Coupe and some cash to fellow club member Bob Smith. Bob brought the car home, tore it down, made some changes and it landed on the cover of Hot Rod Magazine March 1958. The roadster was Bob's first Prowlers car and he won many awards with it. When the roadster was featured on the cover of Hot Rod Magazine the frame, rear end, and several engine components had been chromed. According to the article, the engine was from a Mercury. The story also says that the front axle was dropped 2 1/2 inches and fit with pre-war Chrysler products upper shock absorber arms. Brakes all around were from a 1948 Ford, and the steering was a reworked 1932 Ford unit. According to the story the body on the roadster was also sectioned 6 inches.[3]

The car is still around, and is currently owned by John LaBarre, also a Prowlers member.[1] John bought the car from a fourth owner who had nearly destroyed the car. When John got the car it was painted yellow and the doors had been torched out. It was not recognizable, except for the widened cowl, even Carl Burnett didn't recognize it when he saw it. John will restore the roadster to the way it was when Carl owned it.[4]

Please get in touch with us at mail@kustomrama.com if you have additional information or photos to share about Chuck Gibson's 1927 Ford.