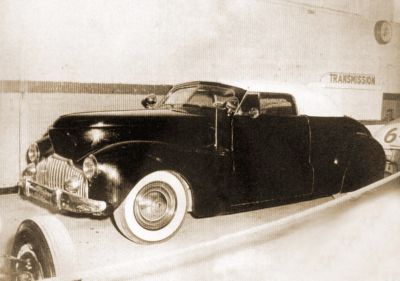 The car as it sat in 1960 when Butler's daughter Marie Fernandez owned it. 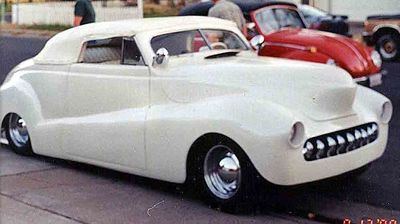 The Mercury as it looked when Jack Walker and Ed Guffey bought it from Ron Marquardt. Photo by Chip Chipman.[1] 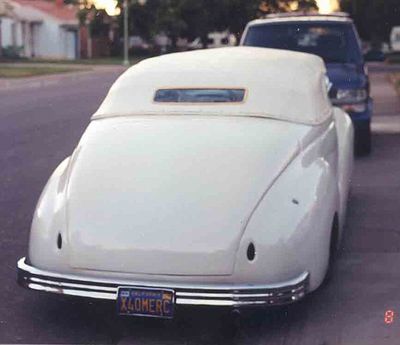 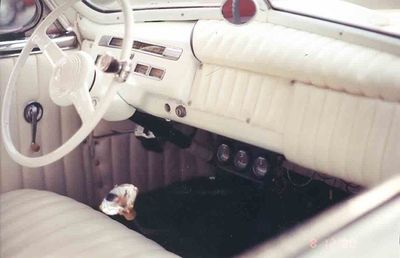 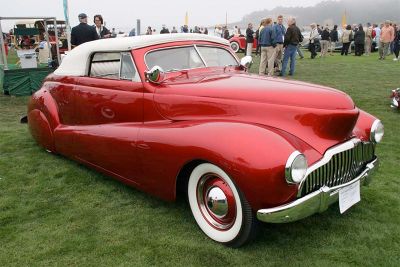 The Mercury after Jack Walker and Ed Guffey restored it 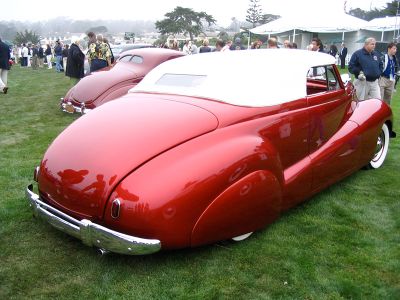 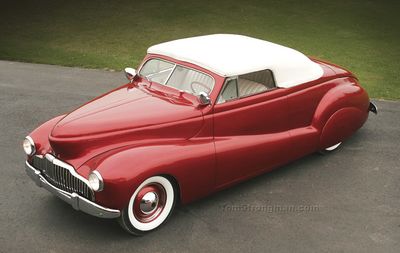 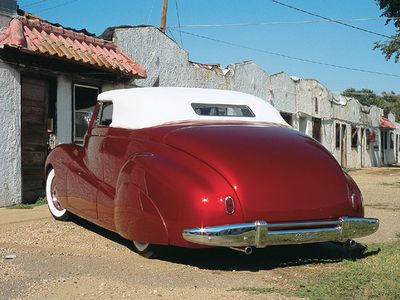 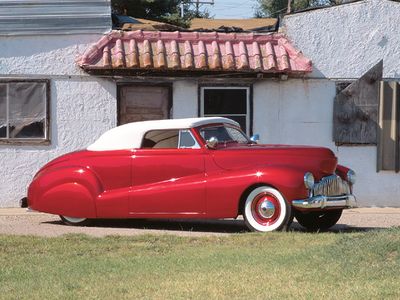 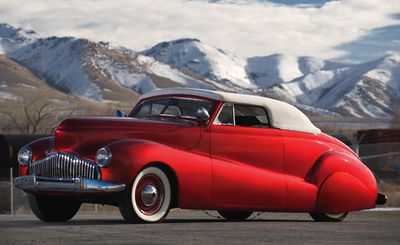 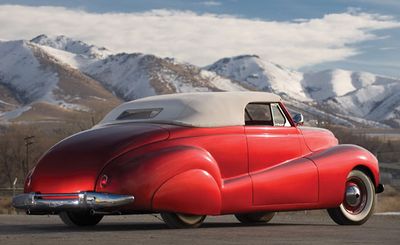 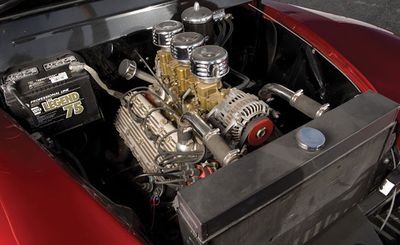 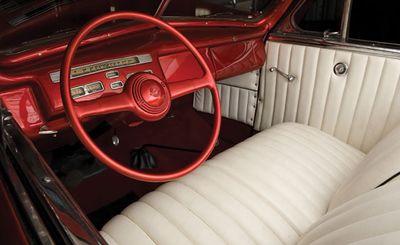 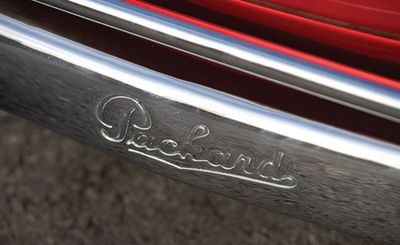 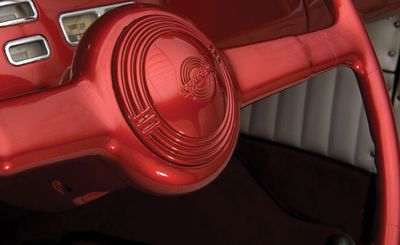 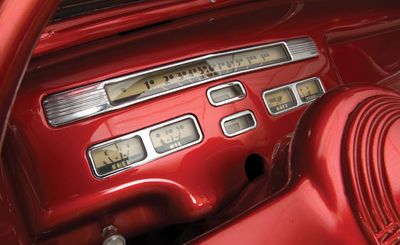 1940 Mercury restyled by Harry Westergard for Butler Rugard. Butler bought the car brand new in 1940, he had owned several customized cars before, and wanted this one to be restyled too. There is no definitive documentation on the car, but it is believed that Butler initially just wanted a set of fadeaway fenders and that the customizing happened on and off over the next couple of years. The Merc's custom features evolved over the years, and at some point it suffered damage in an accident. A later owner, Jack Walker, believes that Butler brought the car back to Westergard in 1942 or 1943 to have the top chopped and the 1942 Buick grille installed. He also thinks that Westergard himself constructed the removable padded top which incorporated parts of the original top frame and bows into the structure. Chopping the top also required cutting the side vent windows at the top and giving them new moldings. Westergard also peaked the hood, and ran the upper beltline around the hood's perimeter. Along the way, he eliminated the flared humps of the Mercury hood, and gave the nose a stepped prowlike protrusion, much like a period "sharknose" Graham. Rippled 1937 DeSoto bumpers were originally installed, but they were later replaced with 1941 Packard units. A picture taken by Gene Winfield shows the car parked outside a drug store wearing 1937 DeSoto ripple bumpers. Its teardrop fender skirts, a rolled and pleated interior, 1941 Chevrolet taillights, Appleton spotlights and stock wheels with Packard hubcaps completed Rugard's unique custom. The car was "taildragged" by keeping the front end ride height stock, and by lowering the rear with a de-arched spring featuring long shackles.[2] The car was shown at the first Sacramento Autorama in 1950, and appeared in magazine coverage of the event.

In Custom Cars August 1960 Butler's old Mercury is featured in the "Mail Call" section of the magazine. The car is by then owned by Marie Fernandez, the daughter of Butler. According to Marie's letter Butler helped Harry with the bodywork on the car. She also writes that the top was chopped 4 inches, and that the white "Carson" top at the moment was upholstered by leopard fur. Her car was painted black, it featured sidepipes, and the fender skirts had been removed. Marie also tells that the dashboard was chromed, the door panels and steering wheel in the car was from a Lincoln, and the headlights were from a Packard.[3]Ron Marquardt bought the Mercury from Marie Fernandez. Ron owned the car for 30-some years. While he owned it, the car spent most of its time in storage. Ron later advertised the car for sale in Hemmings Motor News. Jack Walker found the car, and convinced his friend Ed Guffey to partner with Jack and buy the car. When Jack and Ed got the car ithad been painted white and restyled wth a DeSoto grille. The grille was likely installed after an accident sometime after 1960. The accident damaged both the front and rear. 1940 Chevrolet taillights and sealed beam headlights were probably tunneled at the same time. When Ed and Jack got the car, it was also powered by a 283 Chevrolet engine, and it rolled on early 60's style chrome reverse wheels. Jack determined he would return the Mercury to its configuration when, as photos attest, it was shown at the very first Sacramento Autorama in 1950.

Jack and Ed sent the car to Dave Dolman in Verdon, Nebraska to have the custom bodywork restored. Dave reset the headlights into the front fenders and the 1940 Chevrolet taillights into the rear panel as they appeared in 1950. Other finishing touches included 1941 Packard bumpers, teardrop skirts from Night Prowlers, and 16-inch Mercury wheels with Firestone whitewalls, Packard hubcaps, and trim rings. Uncommon Engineering in Indianapolis built a bored and balanced 1951 Mercury flathead for the car with a period-correct three-quarter cam, Offy aluminum heads, and triple carburetors. Sonny Rogers installed it along with the stock three-speed trans. The Merc rides on stock front suspension, while long shackles and a de-arched spring give it the '40s tail-dragging look. The original padded top was restored by veteran upholsterer Bob Sipes of Pleasant Hill, Missouri. Bob stripped the original down, repaired some of the chicken wire foundation and wood framework across the back, then re-covered it outside with early-style convertible top material and inside with wide-pleated Naugahyde. The white rolled 'n' pleated leatherette upholstery with black piping was in good enough condition to clean up and leave as it was. It took 2 years to restore the car

September 26th, 2009 the old Westergard Kustom was offered for sale without a reserve at the Icons of Speed & Style auction in Los Angeles, California. The car sold for $ 82,500 USD, and ended up in Greece, in Alexi Mougios posession.[4]

Offered for sale by Coys

Saturday, June 15, 2013 Coys advertised the Butlergard Mercury for sale at an auction in Athens, Greece. Before the auction, the Merc was estimated to sell for between €80,000 and €100,000.[5] The car did not sell at the auction, and Mougios kept on to it for five more years. In 2018 Mougios sold the car to John Anastasopoulou of Patras in western Greece. Anastasopoulou owned it for about a year before he sold it again.[4]

Please get in touch with us at mail@kustomrama.com if you have additional information or photos to share about Butler Rugard's 1940 Mercury.