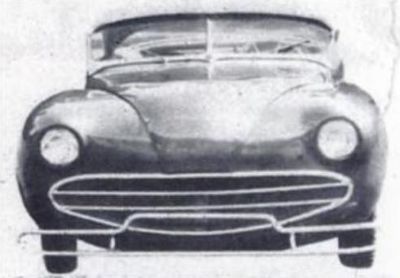 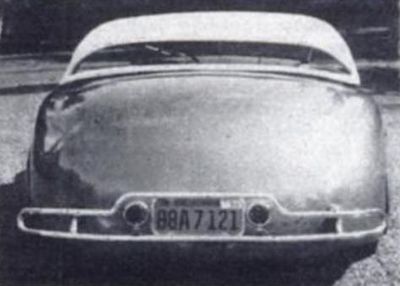 1941 Ford Club Coupe built by race mechanic Bob Trammel. The car was also known as the Bathtub. The body was channeled 10 inches, the seats were dropped into deep wells on either sides of the driveshaft tunnel, the X-member was trimmed to be a very stiff but thin X-member. 6 inches were cut off the bottom of the body and 4 inches from the top of the body. A DuVall Windshield was installed to give a rakish effect. The rerolled springs and dropped Dago axle even brought it further down to the ground. A special radiator was installed to bring the hood line down. A 7/16 inch bored and 1/8 stroked 1941 Mercury engine secured good performance. It was ported and relieved and featured a Winfield 1-R cam, Navarro heads and dual Navarro manifold. Floyd Tipton upholstered the car in two-tone DuPont Fibrilite pleated brown and tan. The back of the front seats were able to fold down and form a bed. As a safety feature, Floyd padded the dash. The build took two years for Bob to complete.[1]

Please get in touch with us at mail@kustomrama.com if you have additional information or photos to share about Bob Trammel's 1941 Ford.