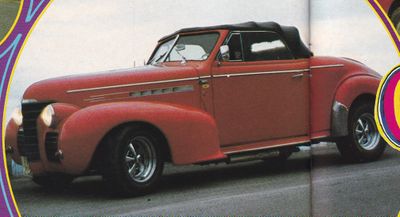 This Hot Rod is from Kiruna in the northern part of Sweden. Cars from this part are rarely seen in mid- och south Sweden.


The car was found in the early 1970s in a ravine outside Kiruna. It had been there since the 50s.


The body was at first a 5-seater, but Bo made a cover over the back seat and a new top for the smaller compartment.


Seats are from Volvo P-1800. Wheels are Appliance 5-spoke with Pos-A-Traction tyres.


Around 1979, Tord Rehnstedt bought the car together with Tomas Enkvist. They own it still today.

Please get in touch with us at mail@kustomrama.com if you have additional information or photos to share about Bo Bernulf 1939 Oldsmobile Cabriolet DL.