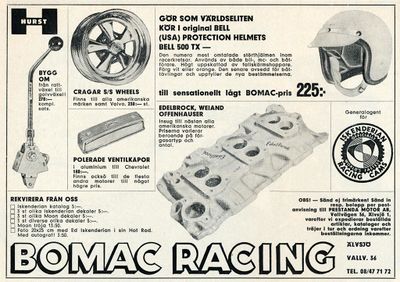 BoMac Racing of Älvsjö in Stockholm, Sweden. Run by Bosse Kasby and his brother Ove, BoMac Racing was the only place you could order hot rod parts from the US in the early days of Swedish hot rodding. Bosse moved to the US in the 1960s, where he went on to work for Dean Moon at Moon Equipment when he was only 17 years old. Ove started out selling racing-parts, that Bosse shipped from the US, out of his garage in Älvsjö. The garage was at their home at Vallvägen 36. When Bosse returned to Sweden, he became a Moon dealer. After a while Ove moved to Huddinge, where he built an enormous garage. He also ran a tow-truck company from that garage. Björn Wallman worked for Ove, and he lived in a playhouse at Ove's property. After selling a Shell gas station he owned in Johanneshov, Ove bought a farm in Österlen, Skåne. He eventually sold the farm and moved to England and then to Ireland.[1]

Please get in touch with us at mail@kustomrama.com if you have additional information or photos to share about BoMac Racing.