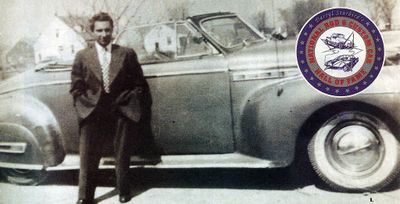 A photo of Bill with an early version of the Buick that appeared in Custom Rodder March 2004. Bill bought the car brand new in 1941. Photo courtesy of Custom Rodder. 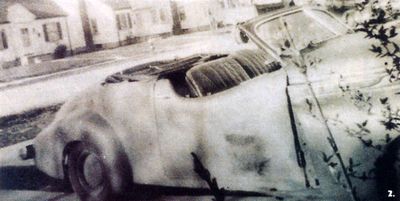 An construction photo of the more radical version of Bill's Buick. Photo courtesy of Custom Rodder.

1941 Buick convertible owned and restyled by Bill Hines of Lincoln Park, Michigan. In 1941, while in the 11th grade, Bill quit school and rented a garage in Ecorse, Michigan to practice custom body work. Bill was self-learned when it came to leading, and he claimed that it just came to him![1] He eventually opened up his own gas station on Dix highway in Lincoln Park, Michigan. Behind the gas station he continued building custom cars, doing custom body and paint work. In 2014 Bill told Jim Leggett of Driving.ca that he built himself a 1933 Ford Phaeton hot rod with a hopped up Flathead V8 at the gas station.[2]

After the hot rod, Bill bought a brand new 1941 Buick Convertible that he customized. In 1989 Jerry Weesner interviewed Bill for Street Rodder Magazine, and during the interview Bill told Jerry that he restyled the Buick in 1941. The interview, titled "The Leadslinger, " appeared in Street Rodder September 1989. The first version of the Buick was turquoise with molded fenders, widened rocker panels, fender skirts, single bar flipper hubcaps and a spotlight. Later on he cut the doors down and added a fin to the decklid.[3] The fin was way ahead of its time, and according to Larry Jordon nobody liked them, so Bill cut it off the car again a couple of weeks later.

In 2015 Bill told Mark Vaughn that he made the custom cars behind his gas station; "When I first started, in 1943 on a ‘41 Buick, I cut the doors down, chopped the top 2 inches and I molded all the fenders in. I widened the rocker panels, they had a 4-inch rocker and I probably made an 8- to 10-inch rocker panel. And it had fins. Every one of my cars winds up with fins. I like the fins. I have ‘em in all of my cars." When Bill bought the Buick it was blue. After he had restyled it he painted it red. In 2015 he told Anna Marco that "Every custom should be Candy Red with Tan or White accents. No other color. My first car was a blue 1941 Buick. I had to paint it red."[4] The Buick became Bill's first custom.

Please get in touch with us at mail@kustomrama.com if you have additional information or photos to share about Bill Hines' 1941 Buick.