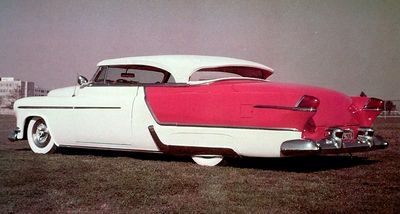 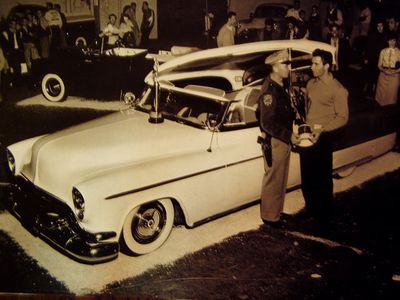 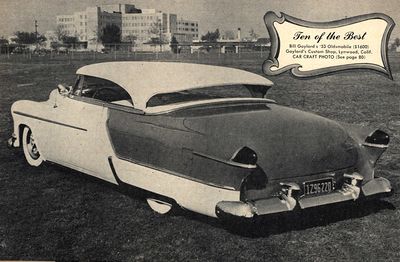 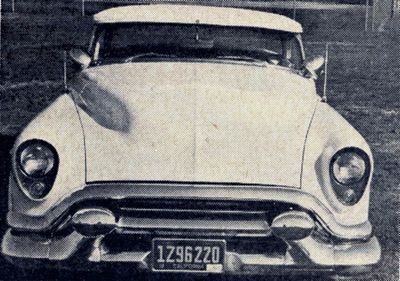 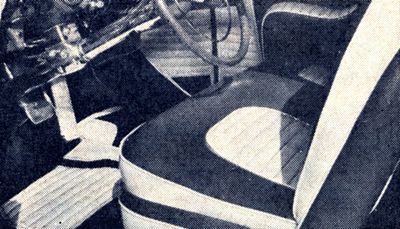 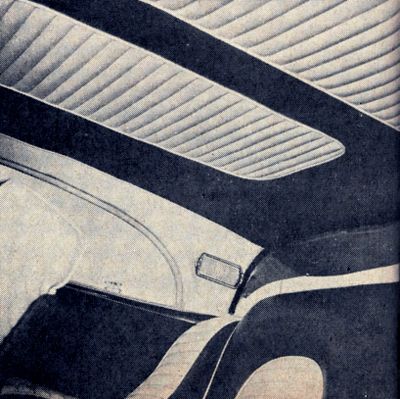 1953 Oldsmobile Holiday Coupe restyled by Bill Gaylord of Gaylord's Custom Shop. To show off his wares, Bill Gaylord decided to create a rolling advertisement in the shape of a 1953 Oldsmobile. The car he started with was a burnt-out shell that an insurance company had given up as total loss.

Up front Bill made a grille out of stock Oldsmobile components. The oval end trim were two reversed dagmars. The dagmars were then faired into the center bar which had been completely smoothed. Bill extended the front fenders two inches at the top and modified them with frenched 1953 Buick headlight rims. The hood was peaked, the peak being contoured all the way off the nose to the upper lip-bar on the grille. Bill also shaved the hood and removed the door handles. He kept the original side trim, and handmade a new trim for the fender skirts. Bill also added dual spotlights on the car.

In the rear, each fender was extended, peaked and modified with 1954 Packard taillights. The rear bumper was also modified with two round exhaust tips flowing through it.

Inside, the car was upholstered from top to bottom. The whole interior was padded with foam rubber and covered with red and white Naugahyde.

Please get in touch with us at mail@kustomrama.com if you have additional information or photos to share about Bill Gaylord's 1953 Oldsmobile.