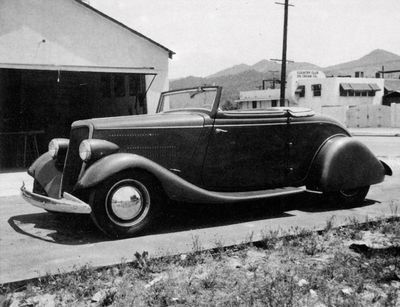 Alex's cabriolet as it appeared when it was black. Photo from the Rik Hoving Custom Car Photo Archive 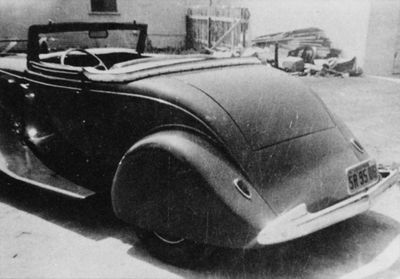 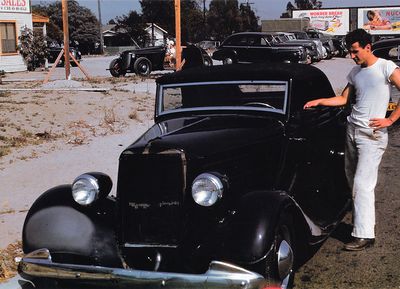 After saving up enough money, Alex had Carson Top Shop make a black padded top for the car. Scan from The Birth of Hot Rodding by Robert Genat. 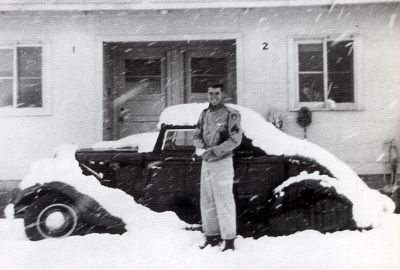 Alex with the cabriolet at the Douglas Air Force Base in Arizona in 1945. Scan from So-Cal Speed Shop - The Fast Tale of the California Racers Who Made Hot Rod History. 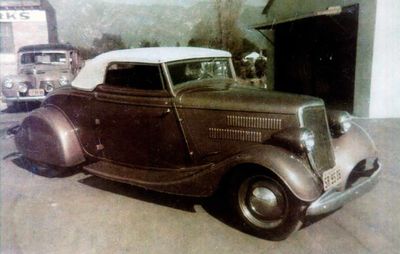 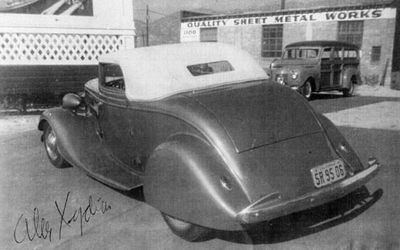 1934 Ford Cabriolet owned by Alex Xydias of Hollywood, California.[1] The car was Alex's third car, and he found it in the basement of the Ambassador Hotel in Los Angeles in 1941. The car had already been customized when he found it, and it had been fit with hydraulic brakes and a column shift. The dashboard housed Buick instruments and was solid brass that had been scrolled and lacquered. The owner of the car was off in the service or something, and Alex bought it from the guy's mother. Alex didn't meet the previous owner, and he was never able to find out who the original builder was.[2] Alex went to Fairfax High School, across the street from Jimmy Summers' shop. He used to hang out and watch Jimmy build customs and hot rods, and he also had Jimmy lead in the rear fender skirts on his cabriolet, as he wanted a smooth look on the fenders.[3] In case of a flat tire, the rear fenders were made detachable by wing nuts inside the trunk. To help avoid having to remove the rear fenders, Alex ran some early puncture-proof Goodyear inner tubes. The inner tubes had a gunk inside that would seal a puncture. The gas tank was put in the trunk so that it wouldn't protrude in the rear. As looks were more important than anything else, Alex saved up enough money to buy a black padded top by Carson Top Shop. This version of the car was painted black, and other modifications included a multi louvered hood, reshaped front fenders, and painted running boards that were molded to the front fenders. The running boards were shortened as well, and stopped right behind the doors. According to Alex, it was a big mistake to paint the running boards, as people kept stepping on them and thereby scratching the paint. Up front, the stock headlights had been replaced by a pair of La Salle headlights, and the stock bumpers had been scrapped in favor of a pair of 1940 Oldsmobile bumpers. The deck lid was shaved, and the splash apron molded in. A set of 1939 Ford teardrop taillights had been installed on the fenders as well. Alex put the gas tank in the trunk, so that it wouldn't protrude in the rear.[2] According to Dean Batchelor, Alex's Ford was also fit a fully chromed 1940 Ford steering wheel.[4]

After completing the cabriolet, Alex became a member of the SCTA Wheelers later on in 1941. It was hard for Alex to attend club meetings, as he had to drive forever down Beverly Boulevard. Eager to race at SCTA meetings he, hang in, and the Ford was his passport. In 1942, Alex joined the Army Air Corps, serving as a B-17 engineer. By the end of the war, In 1945 he was based at Douglas Air Force Base in Arizona. Alex brought the Ford with him to Arizona. On the day of his discharge-March 3, 1946-using some borrowed money, Alex opened the first So-Cal Speed Shop on Olive Avenue in Burbank. "I really struggled to keep it going," says Alex. "Sometimes I made less than $100 a month, but the hard work paid off. When my one-year lease was up, I moved shop to 1104 South Victory Boulevard in Burbank where I placed a Sears Roebuck prefab two-car garage." In 1946, Alex joined the Glendale Sidewinders. In 1948 Alex knew that for So-Cal Speed Shop to survive, he had to run at the dry lakes, there was no other way to get your name out. His '34 cabriolet was the first car at the shop. He parked it out front, and people would stop to look at it. But that wasn't enough. "Eventually, I knew I had to go racing - it wasn't called So-Cal Custom, it was called So-Cal Speed Shop."[2]

Sometime after 1947, the cabriolet was painted metallic gold by Valley Custom Shop. After repainting the car, Alex had Carson Top Shop make a matching white top for the car. Alex dubbed the gold version "Jewel".[2]

Please get in touch with us at mail@kustomrama.com if you have additional information or photos to share about Alex Xydias' 1934 Ford Cabriolet.