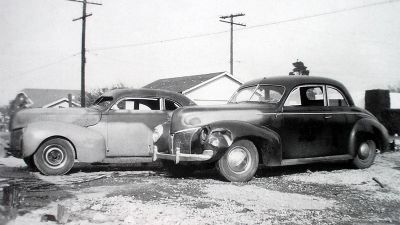 Al's car has recently had its top chopped, Johnny's damaged Mercury is waiting for its treatment 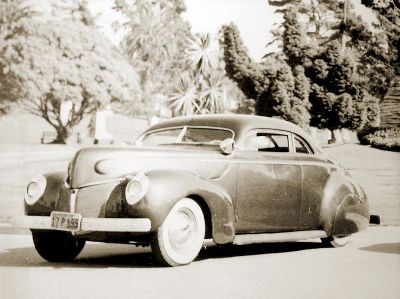 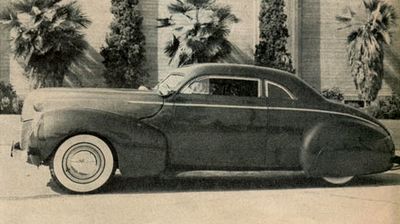 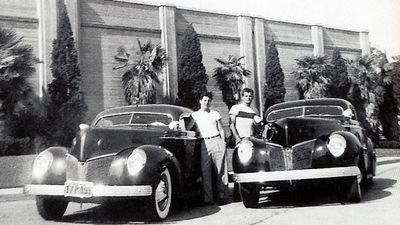 Al Andril and Johnny Zaro in front of their Mercuries. Photo by Don Engle. 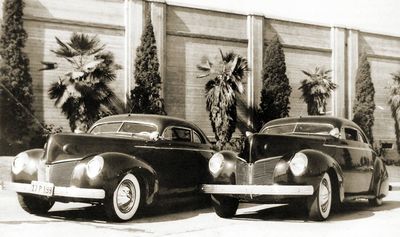 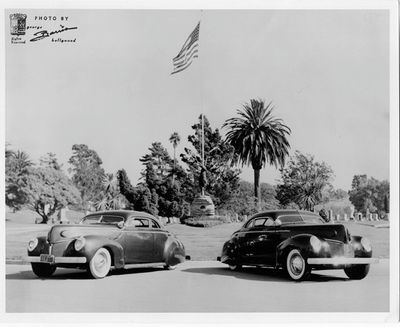 1940 Mercury restyled by Barris Kustoms for Al Andril of Maywood, California. After being discharged from the Navy in 1947, Al and his buddy Johnny Zaro decided to buy a pair of 1940 Mercury's. Johnny lived across the street from Al in Maywood, and they were good friends. In 2011 Justin Kudolla interviewed Johnny about his old Barris Kustom; "Al and I knew each other since we were 10 years old. He moved from San Francisco. We went in the Navy together, and when we got out, we decided we were going to get '40 Mercs and customize them."[1]During their conversations about the coupes, they decided to have the tops chopped. They choose Barris Kustoms to perform the job.[2] Justin asked Johnny how he found out about the Barris Brothers. Johnny said that Al must have found out about them. "I didn't know where they were at. We were both down in San Pedro waiting to get discharged and he found the place up there then." The year was 1948, and George and Sam had now moved to larger premisses at 7674 Compton Avenue in Los Angeles. George and Sam talked the two kids into a lot of modifications, including shaved handles and molded fenders. Al's coupe was restyled first. "Mine was a bigger project" did Johnny tell Justin. "Because when I was coming down Alameda, there was a car that pulled into the side of me."[1]

Al's Merc was nosed, with only a small chrome trim molding left on each side of the hood. Trunk and door handles were removed, and substituted by all-electric push-buttons. The fenders were molded to the body with an elegant curve on the rear fenders. The top was chopped 5 1/2 inches, and the body was channeled. Special taillights were built into the rear bumper guards. The bumpers were 1938 DeSoto ripple bumpers, and the skirts were steel teardrop. In front the car was lowered using a Dago dropped axle. Overall height of the car was 4' 11". Ground clearance was 4 inches in the rear. Single bar Flipper Hubcaps on wide whites and Appleton spotlights wrapped up the style.[3]

Inside the car was fitted with heavy plastic dash pieces attached to the chrome panel. Top and side panels were upholstered by Bill Hilborn in two-tone padded leatherette that matched the metallic blue exterior paint.[3] According to Johnny Zaro, Al's coupe was painted the same color as Sam Barris' 1940 Mercury convertible.[1]

The stock engine was fit with an Offenhauser manifold, Denver heads and a 3/4 Harman & Collins cam[3]

Shortly after Al's Merc was finished, he got married.[1] He sold the custom in the early 1950s to Malibu surf pioneer Dale Velzy.[4] Al's buddy Johnny Zaro remembers that Dale took the deck lid off right away so he could fit his surboard in the trunk.[5] It was last seen doing duty as a surfboard transport before dropping out of sight.[6]

Please get in touch with us at mail@kustomrama.com if you have additional information or photos to share about Al Andril's 1940 Mercury.